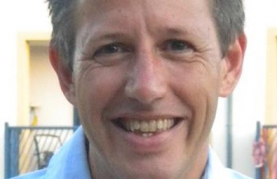 Adrian Ryan is an independent researcher who has focused in particular on the effect of geomagnetic activity on ESP, looking for fresh experimental approaches. He is also interested in the philosophical and sociological implications of psi research.

Geomagnetic field fluctuations are caused by solar coronal discharge interacting with the Earth’s magnetic field. Ryan has carried out research in different areas looking for a possible relationship with psi scoring.

Ryan contributed to ESP studies carried out over a four-year period with long-term meditation practitioners, looking for possible geomagentic influence. Every year, each of 24 experienced meditators at Samye Ling Tibetan Centre (near Lockerbie, Scotland) completed at least eight free-response ESP sessions. Ryan analyzed these against geomagnetic measurements supplied by the nearby observatory of the British Geological Survey. Males were found to score significantly below chance (p = 0.02), while females scored at chance; the difference was significant (p = 0.03). Analyses of the geomagnetic field (GMF) data found no correlation with ESP ability generally, although for some middle GMF frequencies there was some relationship. As in previous research, participants with the highest temporal lobe scores showed the strongest correlation between psi and geomagnetic field, with a marginally significant result (p = 0.06).1

To gain a clearer understanding of why some studies show a negative relationship and others a positive relationship, Ryan obtained outcomes from 244 ganzfeld telepathy sessions conducted at Edinburgh University and 99 precognitive remote viewing trials conducted at a museum in York. Two patterns were observed: ESP succeeded only during periods of enhanced pulsation activity within the 0.2-0.5Hz band, and there was no relationship with higher GMF energy bursts in the 0.025-0.1Hz range. The pattern of correlations appeared to account for previously disparate results reported in the literature.2

Previous research3 demonstrated an association between geomagnetic activity (GMA) and bizarre dreaming. Ryan tested these results against 18,000 dream reports obtained from www.dreambank.net, finding that dreams which occurred during periods of high GMA were considerably shorter – indicating a less bizarre nature – than those that took place during periods of low GMA (p = 0.03).  The correlation between report length and daily geomagnetic activity was small, but because so many trials were used it was highly significant (p = 0.005). The mixture of negative, positive and zero correlations, and the significant but small overall correlation, reflected the association of free-response ESP trials and global GMA (described above).  Ryan concluded that the relationship between dreaming and geomagnetic activity is complex and may involve pulsations in the 0.2-0.5Hz band.4

In an anthology contribution, Ryan and James Spottiswoode report attempts to understand the impact of environmental factors on laboratory psi.5 They first reviewed the research literature for associations between ESP and geomagnetic activity for ESP patterns relating to season and local sidereal time (based on the relationship between Earth’s rotation and fixed stars), then looked for similar relationships in fresh datasets. The overall correlation found between geomagnetic activity and 6000 free response trials was not significant, suggesting that the GMA-ESP correlation is complex and unreliable. Previous relationships between local sidereal time and ESP performance were replicated in fresh data, but the peaks of maximal effect size occurred at different sidereal times (from 13:30 hours to 08:30 hours).

Ryan recently established Psi Open Data, a public repository for psi research data. Datasets received so far encompass a wide range of parapsychological inquiry, including anomalous cognition, presentiment, psychokinesis, reincarnation and survival research.7  They are available to be used, modified and shared by anyone.

Ryan, A. (2009). Proceedings of the 33rd Annual international conference of the Society for Psychical Research. Winchester, England.