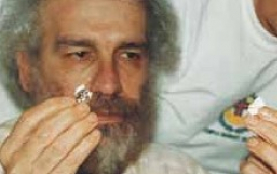 Amyr Amiden is a Brazilian physical medium known for the appearance near him of ‘apports’ (psychically-materialized objects), sometimes on request. The phenomenon was investigated in 1994 by a team of researchers led by Stanley Krippner, on whose reports this article is based.

Amyr Amiden was born in the 1940s, of Syrian/Iranian parents. He told American investigator Stanley Krippner that psychic phenomena ran his family: his father, grandfather and siblings were all ‘sensitive’, although only he and his grandfather produced apports.1

Amiden was raised as a Muslim but as an adult became more eclectic in his spiritual leanings. At the time of Krippner’s investigation, he worked part-time as a secretary for a labour union while also helping run his family’s import-export business.2 He derived no income from psychic activities.3

Psychic phenomena associated with Amiden began to occur when he was eight years of age.  As he explained to Krippner, he believed that a second ‘younger’ personality had joined his existing personality at that time, and that this part of himself visited the spirit world in his dreams, obtaining spiritual counsel.4

In 1993, Krippner, visiting Brazil on behalf of the Institute of Noetic Studies, was invited to a dinner where Amiden was present as a guest. He and other guests observed Amiden apparently producing jewelry on demand for two women. When one asked for an emerald, he told her to close her fist and wrapped his hand around hers; when she opened it she found a stone, later confirmed as a genuine low-grade emerald. The second woman specified a gold bracelet: Amiden shaped a bracelet around her wrist with tin-foil butter wrappings, and in ten minutes the object had turned to gold, as was confirmed to her later by a jeweler.5

Conversation after the dinner turned to religion; at the mention of Jesus Christ, Amiden’s eyes glazed over and blood was seen to appear on both of his hands and his forehead (Krippner later published a paper on this and other stigmata manifestations).6  The guests also witnessed the anomalous appearance within a chalice of a small stone, perfumed oil and communion wafers.7

Intrigued, Krippner asked Amiden if he would participate in a scientific investigation of his apports, to which Amiden readily agreed.

The investigation took place over eight days between 10 March and 17 March 1994 at the International Holistic University within Brasilia’s City of Peace Institute.8 Krippner assembled a team that included transpersonal psychologist Pierre Weil, graduate psychology student Michael Winkler (who was skeptical of Amiden’s claims),9 psychologist and anthropologist Roberto Crema, physician Ruth Kelson, and physicist Harbans Lal Arora. Amiden was credited as a co-author of the report.

Sessions were mostly held in Weil’s office at the Holistic University, sometimes also in the nearby Meditation House or the university restaurant. Amiden always entered and left each location in the company of research team members, Krippner having verified that they were not carrying unusual objects. Amiden was seated with the others at a table for each session, and he was closely watched for unusual or rapid body movements.

Kelson took readings of Amiden’s saliva pH, pulse and blood pressure at each lull in the conversation, also whenever Amiden felt an unusual event was about to occur, which he said he anticipated by an acidic taste in his mouth, loss of colour vision and perspiration on his hands. A magnetometer was placed in an outdoor shed for three days, and readings of local geomagnetic activity were recorded every two minutes during sessions. Geomagnetic or physiological activity correlating to the appearance of apports, Krippner and his co-authors noted, would be hard to explain by normal means.

Krippner and Winkler created a five-point ‘Anomaly Observation Scale’ for team members to use for rating occurrences they witnessed:

2.1 was set as the minimum average score for an occurrence to be recorded as an apparent anomaly.

Over the eight days, 20 sessions were held during which 97 events occurred.  Of these, 91 were rated 2.1 or higher on average, usually by three investigators. They are listed with details in Table 2 in the case report.11  Polished stones, rings, coins and religious medallions were the objects most likely to materialize, dropping to the floor or ground apparently out of nowhere. Once again, Amiden manifested stigmata. A drop of watery liquid observed on a piece of paper transformed into a cone-shaped jewel, later confirmed by a jeweler to be a diamond. Other materializing stones were confirmed as emerald, onyx, agate, amethyst, and prasio. Three brooches were identified as having originated in Bali, Indonesia.

A statistically-significant correlation was made with local geomagnetic activity after anomalous events.  The authors note that on 15 March, when geomagnetic readings were highest, anomalies occurred unusually frequently, one every 13.71 minutes during sessions, and even more frequently on the night of 13 March.  Both these periods were marked by the occurrence of thunderstorms.  A statistically-significant correlation was found with general geomagnetic activity in South America and the southern hemisphere. 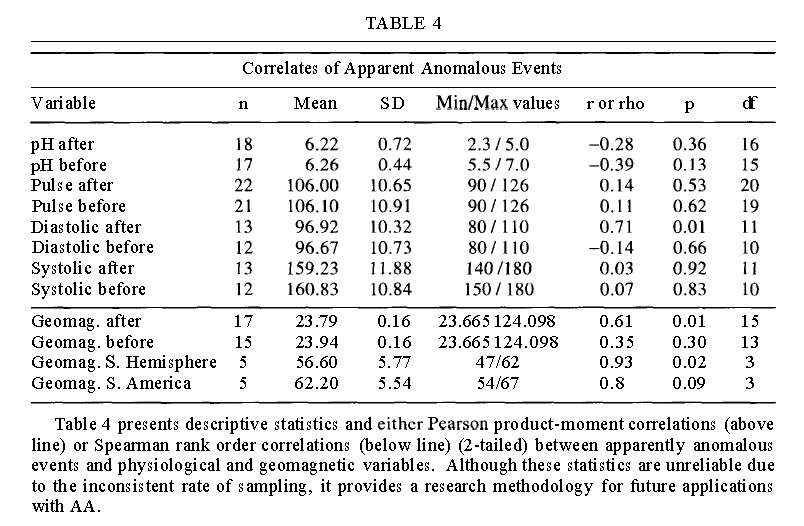 Previous to one incident, Amiden was told that parapsychologists are always on the lookout for a ‘permanent paranormal object’, something that is difficult or impossible to create by normal means, such as a pair of seamlessly linked rings. Moments later, a pair of linked rings, ornately decorated, bounced off his hand onto the floor. The physicist had these examined by metal and mineral specialists, who were unable to find a seam; however budget restraints prevented a sufficiently thorough metallurgic analysis.

The apports were often heard striking the floor or ground, and more rarely seen falling through the air. Several times unusual odours could be smelled, generally pleasant, similar to perfume or cinnamon. Other times, Amiden would say something unusual had happened and the researchers would then find objects in the surrounding area.

In their report the researchers noted flaws in the investigation: lack of high-quality experimental controls, inadequate instrumentation (the magnetometer was somewhat defective), and inconsistent measurements of physiological variables.  Accordingly, they declined to articulate firm conclusions, beyond stating that the results warranted further research.

For future research with Amiden, they suggested instrumentation that would sample his physiological variables every thirty seconds and obtaining more sensitive geomagnetic readings. Use of the five-point scale could be improved by sub-categorization and a larger number of observers rating the events. The authors recommended that all sessions be video-recorded in order to capture the manifestations of apports visually, that the premises be photographed periodically, that blood samples be collected for analysis in cases of stigmata, that the temperature of the apports be measured, and that they be dusted for fingerprints immediately upon materialization. To establish the genuineness of the phenomena beyond doubt, they also strongly recommended the presence of a magician skilled in sleight-of-hand.13

Later statements by Krippner included details not published in the report. The team had attempted to film every session, but when the films were developed, each one showed nothing but a long black line,14 which Krippner counted as an anomalous event.15

According to Krippner, Amiden had identified the radio blips as coded messages from spiritual beings, serving the same purpose as ‘raps’ or ‘knockings’ witnessed in mediumistic sittings, and communicating information on spiritual topics.16 Questioned on his motivation for producing apports, Amiden replied that this came not from him but from the spirits who wished thereby to prove the existence of a spirit world and life after death.17

Krippner also discussed the subsequent status of the apported objects. It had been agreed among the investigators that whoever was closest to an object at its appearance would be permitted to keep it. Those kept by Krippner were later stolen by burglars, but the others are now kept in a museum at the University of Manitoba in Canada. Since apports are said to disappear as readily as they appear – Krippner states that a diamond in his possession dematerialized – Krippner has the museum staff repeatedly check and photograph them,18 but all remain present.19

With regard to the provenance of the objects, Krippner quotes the view of team member Weil that they either already exist somewhere in the world and are ‘teleported’, are ‘carbon-copied’ from real objects elsewhere, or are newly generated.20

A second investigation was vetoed by Amiden’s doctor, as the heart rate and blood pressure readings recorded during the experiments indicated cardiac illness in his opinion.21

Following the publication of the report, Amiden expressed his annoyance about it to Krippner; he objected to words such as ‘allegedly’, ‘reportedly’ and ‘seems to be’, and remained unpersuaded of the need for tentative language in academic works.22 Following this exchange, while Krippner was on the phone in another room he heard a thud; going to investigate he found a bluish-green stone as large as his fist on the floor.23 Moments later, a book with a cover of the same bluish-green colour landed with a thud onto the floor. It turned out to be one that belonged to another of the investigators, which he had lost and was searching for. Amiden declared that this activity was a message to Krippner from ‘spirits’ insisting on their existence. Amiden asked Krippner not to talk or write about him again.24

Krippner kept that promise until 2013, when he again met with Amiden in Brasilia, and the two were reconciled.  On this occasion a total of seven apports appeared, one of which was a stone of the same blue-green, which Amiden said was Krippner’s healing colour.25

Amyr indicated that he was willing to be tested again by Brazilian investigators, but this had not yet been done. 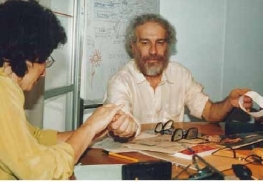 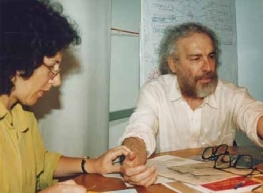 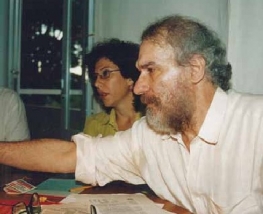 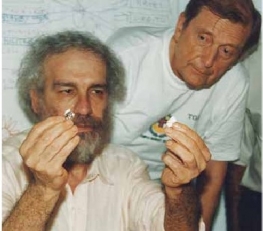