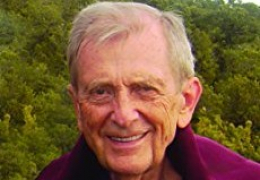 Stanley Krippner is an American psychologist and parapsychologist, known for research in dream ESP, altered states of consciousness and shamanism. He is the author, co-author and editor of many books and articles on parapsychology and other topics, including Debating Psychic Experience (2010), Varieties of Anomalous Experience (2014), and the multi-volume Advances in Parapsychological Research (1977-2013).

Stanley Krippner was born in 1932 in Edgerton, Wisconsin, USA, and grew up on a farm. He has stated that all his interests date back to his childhood in some way.1 For instance, he became fascinat-ed by the Native American arrowheads that were unearthed while he was helping his father plough the fields; learning about the tribe that had lived there led him to study shamanism. He recorded his dreams from an early age, later becoming motivated to study dreams after reading about them in the popular press.  He also developed an interest in hypnosis, after reading about it in popular articles.

Krippner experienced a spontaneous psychic incident when he was fourteen. He had thought of asking his wealthy Uncle Max to buy him an encyclopedia, knowing his parents would not be able to afford it in the wake of a bad harvest. ‘And then I thought “No, Uncle Max can’t do it because he’s dead.” And as soon as I thought, “He’s dead”, the phone rang downstairs.’2 The call was from Max’s daughter, bringing the news that he had died unexpectedly of a heart attack, despite being in his forties and apparently healthy.

Krippner learned about parapsychology while taking a philosophy course at the University of Wisconsin. He organized a speaking engagement featuring JB Rhine, director of the parapsychology laboratory at Duke University, beginning a long friendship. He also began his own field investigations, debunking a poltergeist claim and a horse credited with an ability to tell fortunes, which he found was being directed by its owner using a coding system.

At Kent State University Krippner was in charge of a training and research program in children’s speech, reading and learning issues. He gained his MS in 1957 and PhD in 1961 at Northwestern University. He spent a summer in Hawaii working as a teaching assistant for parapsychologist Gardner Murphy.

In the early 1960s, Krippner began attending the annual convention of the (American) Parapsychological Association. At the 1963 gathering he was introduced to parapsychologist Montague Ullman, who invited him to head the dream laboratory at Maimonides Medical Center in New York. Krippner worked there for ten years, experimenting with psi phenomena during dream states.

He later took a teaching position at Saybrook University in San Francisco (then named the Humanistic Psychology Institute), and has remained there ever since, dividing his time between teaching and research.

In an appreciation of Krippner’s work in parapsychology, Millay and Engelman write: ‘His numerous publications on the multidimensional nature of consciousness are recognized as fundamental to the understanding that the mind is intrinsically entangled in the consciousness of life – the whole biosphere and the cosmos’.3

Krippner worked to bring psi into the mainstream of scientific research on the basis of this holistic view. He met Timothy Leary and took part in a psilocybin experiment, gaining the insight that psi activity is related to altered states of consciousness, and went on to demonstrate that psi could occur in altered states.

The Maimonides research expanded psi research by including the concept of consciousness in a deeper way. Krippner and his colleagues developed new techniques, such as waking subjects while they were dreaming in order to enable them to give immediate reports. They showed that telepathy, remote viewing and precognition in dreams can be demonstrated in the lab by means of a replicable method. The research also revealed that the occurrence of ESP is affected by the subject’s personality and conscious and subconscious attitudes.

Krippner was concerned to show that psi and shamanism are not pathological, arguing that paranormal experiences are more likely to occur within cultures that accept them than those that are not. He studied the effects of external influences on psi experiences, and collaborated with Michael Persinger, comparing many years of dream telepathy data with sunspot activity records of the same period in order to show that telepathy tends to be less accurate during times of high geomagnetic activity.

Krippner was instrumental in bringing together parapsychologists worldwide and arranging means for them to share books and papers. As professor of  Psychology at Saybrook, Krippner has guided students from America and elsewhere through doctoral programs that include parapsychological studies, helping establish and spread parapsychology globally.

With regard to Krippner’s dream telepathy experiments, psi skeptics complain of experimental flaws and lack of replication.

British psychologist CEM Hansel alleged that the experimenter was with the agent or ‘sender’ (the person attempting to telepathically transmit a particular image to the sleeping subject, or ‘receiver’), while the agent was opening the envelope that contained the target image. If true, this would have been a potentially serious design flaw, since the experimenter was in communication with the subject and might have indavertently provided clues about the target. However, it is incorrect: the protocol required that the subject be asleep before a target was randomly selected and given in a sealed envelope to the agent, who, before opening it, was locked in a sound-attenuated room, sometimes in a different building.4 Therefore, only the agent knew the identity of the target until the subject’s judging was completed.

In fact, some replications have been positive. In 2003, Simon Sherwood and Chris Roe carried out a meta-analysis on both the Maimonides experiments and the 27 studies of dream ESP that had been published since the Maimonides experiments ended. They concluded, ‘When the study effect sizes are combined for the Maimonides and updated post-Maimonides studies, we can see that performance was better than chance with medium and small effect sizes, respectively.’6 An updated meta-analysis by Storm et al, which included all studies carried out to 2016 and was published in the International Journal of Dream Research, reaffirmed that the effect is real, and that ‘dream content can be used to identify target materials correctly and more often than would be expected by chance’.7

A 2012 article in the San Francisco Weekly stated:

Prominent skeptic Ray Hyman praises Krippner’s dream lab studies as ‘interesting work’ and admits ‘there’s no smoking gun to say they don’t have something.’ But he adds, ‘no one has ever duplicated the striking success of the Maimonides Dream Lab.’8

In the same article another sceptic, James Randi, commented:

There are so few things in this field you can depend on, and there are so many people who are prejudiced and biased, but I can depend on Stan. And I don't think he’s biased at all.9

In 2013, Krippner received the American Psychological Association Division 32 [APA] Award for Distinguished Lifetime Contributions to Humanistic Psychology. Other awards from the APA include the Award for Distinguished Contributions to the International Advancement of Psychology (2002), the Division 30 Award for Distinguished Contributions to Professional Hypnosis (2002), Senior Contributor Award (Division 17, Counseling Psychology) (2000), and the Division 32 Charlotte and Karl Buhler Award (Division 32, Humanistic Psychology) (1992). Krippner also received the Society for Clinical and Experimental Hypnosis Human Treasure Award (2013), the International Association for the Study of Dreams (IASD) Lifetime Achievement Award (2006), the Parapsychological Association’s Outstanding Career Award (1998), the Dr JB Rhine Award for Life-Time Achievement in Parapsychology (2002), the Pathfinder Award from the [Association for Humanistic Psychology] (1998), and the University of Georgia Bicentennial Award (1985).

Stanley Krippner has authored or co-authored 33 books and edited or co-edited 29 more. He has written hundreds of papers, articles, book chapters, reviews and commentaries, in parapsychology and other fields. Books and papers on parapsychology are listed below.

Full listings of his publications, interviews, conference presentations and other contributions in all fields may be found on his website here.

Krippner has appeared many times on Jeffrey Mishlove’s TV program New Thinking Allowed. Interviews on a mix of parapsychological and psychological topics can be found here.

Journal of the American Society for Psychical Research

Krippner, S. (2008). Dissemination of the knowledge of parapsychology. Journal of Parapsychology 72, 21.

Journal of the Society for Psychical Research

Krippner, S. (1980). A suggested typology of folk healing and its relevance to parapsychological investigation. Journal of the Society for Psychical Research 50, 491-500.

Krippner, S. (1990). A questionnaire study of experiential reactions to a Brazilian healer. Journal of the Society for Psychical Research 56, 208-15.

Krippner, S. (2004). The dreams and visions of Eva Hellstrom: A Swedish psychic claimant. Journal of the Society for Psychical Research 68, 210-25.

Krippner, S. (1976). Psychotronics and the study of human personality. International Journal of Paraphysics 10, 40-43.

Krippner, S., & Hubbard, C.C. (1973). Clairvoyance and alterations in consciousness evoked by the Electrosone-50 and other devices. Journal of Paraphysics 7, 5-17.

Krippner, S. (1962–1963). An expansion of consciousness and the extensional world. Parapsychology: Indian Journal of Parapsychological Research 4, 167-84.

Krippner, S. (1978). The importance of Rosenthal’s research for parapsychology. Behavioral and Brain Sciences 3, 398-9.

Krippner’s papers are currently held in 87 boxes at the University of West Georgia’s Special Collections, with additions likely. For more information, see here.

Alcock, J. (2003). Give the null hypothesis a chance: Reasons to remain doubtful about the existence of psi. Journal of Consciousness Studies 10, 29-50.