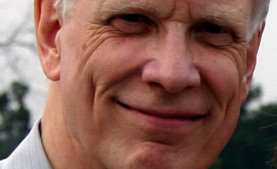 James E Alcock (b 1942) is a Canadian psychology professor, author, amateur magician and career psi-skeptic. His chief interest is the psychology of belief. He is a fellow and member of the Executive Council for the Committee for Skeptical Inquiry (CSI), formerly CSICOP, and sits on the editorial board of its periodical, the Skeptical Inquirer.

James E Alcock was born 24 December 1942 in Central Butte, Saskatchewan, Canada.1 He earned his baccalaureate with honours in physics from McGill University and his doctorate in social psychology from McMaster University. He then took post-doctoral training in clinical psychology and became a practising psychologist in 1974. He joined the faculty of York University in Toronto in 1973 where he continues to work as a psychology professor.2

Alcock has co-authored two influential social psychology textbooks: A Textbook of Social Psychology (6th ed.) with DW Carment and SW Sadava in 2005,3 and An Introduction to Social Psychology: Global Perspectives with Stan Sadava in 2013.4 He is a fellow of the Canadian Psychological Association, has served on several professional psychology boards, and is also an amateur magician and member of the International Brotherhood of Magicians.5

Alcock is married to Karen Hanley. Their son, Erik Alcock, is a musician/songwriter who had two of his songs included on a bestselling album by the American rap artist Eminem.6

Alcock attended the founding conference of the organization formerly known as the Committee for the Scientific Investigation of Claims of the Paranormal (CSICOP), now the Committee for Skeptical Inquiry (CSI).7 He went on to become a fellow of the organization, a member of its executive committee, and a member of the editorial board of its periodical Skeptical Inquirer.8 He has contributed frequently to the publication and is a long-time leader of its Skeptics’ Toolbox four-day workshop series.  He spoke at the World Skeptics Congress in Italy in 20049 and again in 2012, giving an opening speech on the history of the modern skeptical movement.10

In 1999, he was named by a panel of sceptics as one of two dozen outstanding sceptics of the twentieth century.11

He has made occasional media appearances; however, most of his sceptical work is written (see Select Publications below).

Alcock’s critiques of parapsychology have been firmly rebutted by researchers, who say he persistently misrepresents its history and achievements. They are particularly critical of his insistence that  parapsychologists are motivated to confirm metaphysical dualism in order to support their supernatural and religious beliefs, which they argue is demonstrably untrue.12 They criticize his tendency to ‘single out for attention an example of a given error or extravagant claim in parapsychology and imply that it is representative of the entire field’ without establishing that this happens any less in other science. They also complain of his use of rhetorical methods that include ‘innuendo, ad hominem attacks on researchers, biased choice of words and scare quotes’.13

In 2018, American Psychologist published a review by Etzel Cardeña of the experimental evidence for psi phenomena, concluding that this was comparable to the evidence for accepted phenomena in psychology, medicine, and other disciplines.14 The following year the journal’s editors published a rebuttal authored by Alcock and Arthur Reber (which subsequently also appeared in Skeptical Inquirer), in which they declined to engage with the individual experiments, as the results, appearing to contradict long-established scientific principles, must for that reason necessarily be invalid.

Parapsychologists responded that this stance goes against a core tenet of science, and that some eminent physicists have in fact accepted the possibility of psi phenomena.15  They were supported by physicists who pointed out that new theories are required to reconcile relativity with quantum mechanics, and possibly also to explain consciousness, and that these may eventually extend to account for psi phenomena.16

In an article in Skeptical Inquirer, Alcock critiques presentiment experiments published in 2011 in the prestigious Journal of Personality and Social Psychology by Cornell psychologist Daryl Bem.17 Alcock claims to identify methodological flaws, stating ‘Just about everything that could be done wrong in an experiment occurred here’.18  Bem, invited by the magazine to respond, points out that all six of the journals referees and editors who evaluated the paper and who, unlike Alcock, were active researchers in the field, recommended it be published, agreeing on ‘the logic and clarity of its exposition, the soundness of its experimental methods, and the validity of its statistical analyses’.19

Alcock contributed to a critical meta-analysis carried out in 1988 on behalf of a committee of the National Research Council, an American government agency. The subject was tested for psychokinesis using random-number-generators (RNGs), many performed at the Princeton Engineering Anomalies Research (PEAR) laboratory, and experiments on remote viewing. Alcock’s critiques, later published in his 1990 book Science and Supernature, claim to discover methodological flaws which render all positive results invalid.20

Parapsychologist Adrian Parker, in a review of sceptic Paul Kurtz’s book A Skeptic’s Handbook of Parapsychology,23 singles out a chapter by Alcock, writing: ‘This chapter is disappointing in that it consists mainly (18 pages) of a motivational analysis of why parapsychologists do research in this field; then on the last two pages he aptly negates everything he has previously written by agreeing that this is totally irrelevant as to the question under discussion, the existence of paranormal phenomena'.

In a review of Parapsychology: Science or Magic?, parapsychologist Michael Thalbourne takes issue with Alcock’s insistence on absolute replicability of psi experiments; his dismissal of successful probability studies; and a ‘tedious and unfair’ tendency to include parapsychology with non-parapsychological anomalous claims such as creationism, the Bermuda Triangle, Satanism— ‘as if they were all in the same category scientifically and all equally dangerous to society’.24  Thalbourne further contradicts Alcock’s suggestion that successful psi-results are only obtained by researchers who believe in psi, citing as an example a successful experiment by a sceptical experimenter.25

Belief: What It Means to Believe and Why Our Convictions Are So Compelling (2018). Amherst, New York, USA: Prometheus Books.

The propensity to believe (1996). In The Flight From Reason, ed. by N. Levitt et al. New York: New York Academy of Sciences.

Believe It or Not: Can We Always Make a Choice? Center for Inquiry, lecture given at CSICon Las Vegas on 28 October 2016.

Alcock, J. (2011). Back from the future: Parapsychology and the Bem affair. Skeptical Inquirer, March/April 2011.

Bem, D.J. (2011a). Feeling the future: Experimental evidence for anomalous retroactive influences on cognition and affect. Journal of Personality and Social Psychology 100/3, 407-25.

FFreeThinker (2012). A brief history of the skeptical movement (speech by James Alcock at the World Skeptics Congress, 2012. Video published on YouTube 25 May 2012.

Palmer, J. (1985). An evaluative report on the current status of parapsychology. Paper prepared for the United States Army Research Institute for the Behavioral and Social Sciences.

Williams, B.J. (2019). Reassessing the impossible: A critical commentary on Reber and Alcock’s “Why Parapsychological Claims Cannot Be True”. Journal of Scientific Exploration 33/4, 599-616.