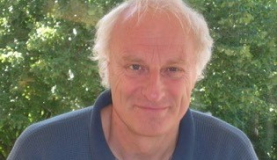 Adrian Parker is an Anglo-Swedish clinical psychologist, parapsychologist and author based at Sweden's University of Gothenburg. In the 1970s he was one of  the first psi researchers to use the ganzfeld telepathy technique. He is the current president of the Society for Psychical Research.

Adrian Parker is Emeritus Professor of Psychology at Sweden’s University of Gothenburg. He was a recipient of the Perrott-Warrick Studentship in parapsychology from Trinity College, Cambridge, researching skilled lucid dreamers. After qualifying as a clinical psychologist from the Tavistock Clinic, London, Parker gained a PhD from the University of Edinburgh, the first UK doctorate on psi. In the 1970s, he was among the first researchers to use the ganzfeld telepathy technique. He then wrote the book States of Mind (1975) about his main research areas: altered states of consciousness and psi.

Parker worked in Sweden on his medical and clinical activities for some years before obtaining major research funding from the Swedish Riksbank to further develop the ganzfeld technique – which became known as the 'real time ganzfeld'.

In May 2021, Parker was elected president of the Society for Psychical Research, having been programme chairperson organizing its international conference since 2016.

Parker carried out five ganzfeld studies at Gothenburg University before 2000. Scoring was highly significant at 36% where 25% is expected by chance (p = 0.001). Relationships between identifiable variables and significant scoring were noted, including personality, belief and magical ideation. Receiver confidence ratings correlated significantly with hit rate: the greater confidence felt by a participant in choice of target, the more likely it was to be correct.1

Parker ran an automated ganzfeld experiment in which the receiver’s mentation is automatically stored to a digital audio file, enabling synchronized playback of the verbal report with the videos. This facilitates evaluation: specific events in a video can be associated with changes in the receiver’s mentation, indicating real time telepathy. The system was tested on 64 pairs of volunteers who exchanged roles as sender and receiver for a total of 128 trials. Scoring, rated by an independent judge, was slightly below chance level at 23% (p = 0.386). In half the trials the receivers evaluated their sessions also, and this resulted in a statistically significant below chance hit rate of 14% (p = 0.050). However, close correspondences between real-time mentations and video-clips were frequently noted.2

Parker aimed to optimize ESP scoring by combining the successful ganzfeld technique with the use of identical twins as subjects, who previous research suggests often share a psychic bond. Fourteen pairs of identical twins took it in turns to act as receiver and sender in a real-time ganzfeld session. The first study gave a 36% hit rate, where 25% is expected by chance. Although highly significant, this level of scoring is in line with special populations such as musicians and fell short of what might have been expected from a group that has shown a particularly high level of psychic bonding.

Parker and Paulsson explored dream states, employing the reflection-intention (RI) technique to enhance recall of lucid dreams (the state in which the sleeping person is aware she is dreaming and can control the content). Twenty participants recorded their dreams before, during and after undergoing the RI technique. Overall results indicated a significant increase in both lucid and normal dream recall (p = 0.05), although the small sample size and absence of controls such as blinding discouraged strong conclusions.3

Informal demonstrations of twin telepathy have frequently been carried out in television documentaries. Parker and Jensen carried out experiments using a methodologically tighter protocol in which one twin was exposed to five randomly presented mild shocks while the other was monitored for electrodermal activity, blood pressure, breathing, and bodily movements. Overall results, scored by a polygraph expert, failed to reach significance (p = 0.7), but one pair of twins provided significant evidence for information transference (p = 0.03). When the results were scored by an independent judge the effect appeared even stronger (p = 0.0003).4

Parker and colleagues attempted a variation of ‘priming’ precognition experiments carried out by Daryl Bem. They hypothesized that humans reacting unconsciously to emotionally threatening stimuli might habituate to these if they subsequently proved harmless. A study with fifty participants found a significant habituation effect, but only for negatively loaded targets. No significant effect was found for pictures that they would later be exposed to compared to those they were not exposed to.6

Parker has researched a type of experimenter effect, in which any psychic ability demonstrated in psi experiments is attributed not to the subjects taking part but rather to the investigators. A review of the literature yielded strong evidence of such an effect with regard to the most successful research: in many cases successful experimenters demonstrated psychic ability outside the lab or in experiments carried out by others.7

A review was made by Parker of contemporary theories concerning the nature of hypnosis. The second part of the review concerning studies on hypnosis and psi found widespread methodological weaknesses and failure to replicate. He argued for following more successful research avenues such as dissociation and schizotypy and for selecting participants for likely psi ability rather than using subjects from the general population.8

Parker has focused on what can be learned from historical cases in psychical research. With Annekatrin Puhle, he critically reviewed the Ingeborg Dahl case, exposing its weaknesses as evidence for survival.9 With Elisabeth Warwood, he presented evidence for the identity of the much-debated spiritualist medium Madame D’Esperance.10 Archival photos from the Sven Hedlund Collection in the Gothenburg University Library, along with other sources, revealed methods she used to get her sitters to experience illusory meetings with dead relatives. Recently he wrote with Annekatrin Puhle an article on the importance of the physician Axel Munthe for psychical research.

Psychokinesis and the Mind-Body Problem

Parker contributed a chapter in Mysterious Minds: The neurobiology of psychics and other extraordinary people (2009) in which he reviewed experimental findings and evidential cases for psychokinesis at both macro and micro levels. He argues that these provide support for approaches to consciousness advanced by Frederic Myers, William James and William McDougall, taking a standpoint midway between dualism and panspychism. In particular, McDougall’s concept of the will is seen as having increasing relevance as a quantum decision-making process.

Some publications with Swedish critics are only available in Swedish. Parker has maintained debates with critics such as Nils Wiklund and James Alcock, contributing a chapter in the critical anthology Psi Wars (2003).11 He also published an essay review of Debating Psychic Experiences edited by Krippner and Friedman, seeking a resolution of contested issues.12

Jensen, C., Parker, A. (2012). Entangled In The Womb? – A Pilot Study on the Possible Physiological Connectedness Between Identical Twins with Different Embryonic Backgrounds. Explore 8/6, 339-347.

Parker, A. (2000). A review of the Ganzfeld work at Gothenburg University. Journal of the Society for Psychical Research 64, 1-15.

Parker, A. (2001). What can psychology and parapsychology tell us about near-death experiences? Journal of the Society for Psychical Research 65, 225-240.

Parker, A. (2003b). We ask does psi exist? But is this the right question and do we really want an answer anyway. Psi Wars (eds. J. Alcock, J. Burns & A. Freeman). Exeter, UK: Imprint Academic. Special issue of Journal of Consciousness Studies.

Parker, A. (2014). Revealing psi secrets: Successful experimenters seem to succeed by using their own psi. Journal of Parapsychology 78/1, 39-85.

Parker, A. (2015). The jungle of hypnotic psi, part 1: Research on hypnosis relevant to psi.  https://www.researchgate.net/publication/277955203_The_jungle_of_hypnotic_PSI_Part_1_Research_on_hypnosis_relevant_to_PSI

Parker, A., Persson, A. & Haller, A. (2000). Using qualitative Ganzfeld research for theory development: top down processes in psi-mediation. Journal of the Society for Psychical Research 64, 65-81.

Parker, A. & Warwood, E. (2016). Revealing the real Madam D'Esperance: A historical and psychological investigation, Journal of the Society for Scientific Exploration 30, 233-256.https://www.gu.se/english/research/publication?publicationId=259122