Psychokinetic phenomena was experienced in 1956 by a family living in Battersea, London. The most complete record was made by psychical researcher Harold Chibbett. His papers eventually passed to Shirley Hitching, who as a teenager had been the focus of the events, and were used in her 2013 book The Poltergeist Prince of London, co-written  by James Clark.1

The disturbances occurred at 63 Wycliffe Road in Battersea, a west-central district of London. The occupants were the Hitchings family: Wally, a train driver, his wife Catherine and their 16-year-old daughter Shirley, Wally’s mother Ethel, and a young male relative, Mark (not his real name).

In late January 1956, a silver-coloured key appeared on Shirley’s bed, which no one could identify, though her father tried it in every lock in the house. He left it in the kitchen and the next morning it was found again on Shirley’s bed.

Rapping noises began to be heard in late January 1956, keeping the family up at night, and then during the day, mostly where and when Shirley was present. The noises increased in volume to the point where they could be heard from the street, attracting local attention. Disturbances occurred around Shirley at work, obliging her to take two weeks off. In an incident on 18 February, a glove that Shirley had dropped flew up and hit her father in the face.

Visiting reporters witnessed incidents such as chairs and slippers being thrown and Shirley’s wristwatch detaching itself from her wrist. Wally was quoted saying

Shirley said the bedclothes were being pulled under her so we got hold of them and felt that they were being tugged by force. While this was going on we saw that Shirley was being lifted out of her bed. She was rigid and about six inches above the bed when we lifted her out and stood her on the floor.2

The rapping noises appeared to have an intelligent source that communicated by a rudimentary alphabet code, claiming to be a deceased boy named Donald with whom Shirley had played as a child.3 The communications now also appeared in handwritten notes, apparently not in Shirley’s hand.

A reporter, Joyce Lewis, slept in the same bed as Shirley one night and witnessed the girl being clawed and pulled out of the bed.

Shortly after the publication of a sceptical news article the incidents took a darker turn, including threats to set the house on fire. These appeared to be substantiated by the appearance of a lit match flying through the air and bedclothes being set on fire. Wally sustained a bad burn on one hand.

Harold Chibbett, a paranormal investigator, began an investigation in early March.  He obtained striking verifications of facts ‘Donald’ gave about an eighteenth century English theatre production, but then learned that a play containing all this information had been broadcast on the same day. He failed in further attempts to verify ‘Donald’s’ story, which included a claim to have been Louis XVII, son of the executed French King Louis XVI.

In 1957 a new spirit purportedly emerged, claiming to have been the movie star James Dean. ‘Donald’ now insisted that Shirley become a movie star herself.

Having moved back in and then out again to evade to fire threats, Shirley’s grandmother Ethel died of a stroke.

Shirley started working as a clerical assistant for a stationery firm. In 1959, she started art school for theatrical costuming, but left after the required volunteer work proved to be too demanding in combination with her job. She married in 1961. By now, ‘Donald’s’ manifestations were beginning to fade and by 1968 they had ceased altogether.

The 1956 Battersea poltergeist gained renewed coverage in British tabloid newspapers following the publication of the book by Hitchings and Clark.4 A popular BBC Radio 4 podcast on the case by Danny Robins ran from January to April 2021. The trailer can be viewed here and episodes downloaded here.

Scepticism was expressed in some contemporary media coverage, as exemplified by a story in the 15 March 1956 issue of the Weekend Mail with the headline ‘Spook Was In Girl’s Big Toe!’

British ghost hunter Andrew Green is mentioned in the Guinness Book of World Records for having received the only known letter from a supposed poltergeist (‘Donald’), which he believed was written by Shirley herself.6 He noted that, shortly prior to every tapped response to a question, Shirley appeared to squeeze her eyes shut for a second beforehand, ‘as if summoning up “the force”’.7 Green concluded it was ‘some sort of external manifestation of Shirley’s psyche psychology’, or recurrent spontaneous psychokinesis (RSPK), involving no external spirit.8

At one point, ‘Donald’ claimed that Louis XVII had been rescued from prison and another boy executed in his place. This was decisively refuted in 2001, when scientists compared DNA from the prince’s remains to that of living descendants of Marie Antoinette and found a likely match.9

Tom Ruffles, reviewing Hitchings and Clark’s book for the Society for Psychical Research, finds that ‘Donald’ ‘does not hang together as a credible personality’, pointing out that ‘Donald’s’ obsessions with the glamour of French royalty and male movie stars have a teenage-girlish feel to them. ‘Donald’s’ demands always seemed to work to Shirley’s advantage, Ruffles notes: she was given a room of her own, prevented from taking boring jobs and enabled to stay home playing with dolls and costumes. Her grandmother Ethel’s iron rule over the household was broken, most finally by her death, which was possibly in part caused by poltergeist-related stress. In addition, Shirley received extensive public attention, including an appearance on BBC television.

It may be a massive injustice to point the finger at Shirley, but, using that handy razor, it seems more likely that she was actively – and consciously – involved in perpetuating the situation that brought misery and massive inconvenience to her relatives than that Donald was the surviving consciousness of a member of the French royal family.10

Otterson, J. (2021). ‘Battersea Poltergeist’ to be adapted as scripted, unscripted series by Blumhouse TV and Maniac Productions. Variety (25 May).

Ruffles, T. (2016). The Poltergeist Prince of London: The Remarkable True Story of the Battersea Poltergeist, by Shirley Hitchings and James Clark [Review]. Society for Psychical Research (14 May). [Web page.] 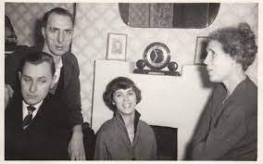 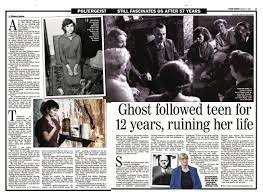