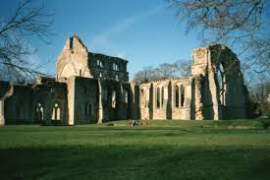 Beaulieu is a small village in Hampshire, England, the site of a ruined Cisterican abbey where ghostly sightings have frequently been reported.

Beaulieu Abbey was originally founded in 1203 by King John as a Cistercian foundation. Its importance was reflected in the size of its buildings and the community attached to it. It succumbed to the Dissolution by Henry VIII in 1538, and a mansion was built on the site by Thomas Wriothesley, Earl of Southampton, incorporating some of the abbey’s original buildings. His daughter Elizabeth married Ralph, the 3rd Baron Montagu, and the house remained in the family until the present day.

Paranormal phenomena have been reported at the abbey for over a hundred years. The Rev Robert Frazer Powles, Vicar of Beaulieu from 1886 to 1939, believed himself to be in regular contact with the ‘ghostly monks’, to the extent of being able to name them individually.1 He maintained that they attended services in the church, clad in white or brown robes and were accompanied by the smell of incense, especially in the Palace House.

[It] had been going on for quite a while before I became conscious of it ... It was the sound of many voices in repetitive singing, which faded and strengthened like the sound from a primitive wireless. At first I thought it was a wireless in the servants’ hall. But the sound wasn’t coming from there. I couldn’t tell you where it was coming from. 2

She later learned that the melody was a well-known Gregorian chant.  She heard it on a number of occasions and sometimes in the company of other people. Guglielmo Marconi, the radio pioneer and a friend of her father, with whom she discussed her experiences, found the idea of ‘playing back of sounds from the past’ comparable to the rings that grow outwards on the surface of water when disturbed by a pebble.3

Lord Montagu himself says he has witnessed neither the apparitions of the monks or their chanting. However, he has alluded to a haunting said to have been caused by a murder in the abbey in the nineteenth century that involved a butler and a maid.4

In 1959, Michael Sedgwick, the curator of the motor museum housed in the grounds, claimed also to have heard distinctive chanting. He initially believed it to be a radio, but could not identify the source. He experienced these sounds on a second occasion. They were also heard by the wife of the film director Fred Zimmerman, during the filming of A Man for All Seasons at the house.5

Other sightings have included a ‘blue’ or ‘grey’ lady walking through walls and making sounds in the private apartments. She is believed to be the ghost of the Countess of Beaulieu, Lady Isabella, who died in 1786. Visitors to the main house claim also to have seen her, and she was reportedly caught on film in the Palace House after visitors had departed. A member of staff (Hannah Broughton) was photographing the building when she saw ‘a ball of light’ dancing around, that at one point metamorphosed into an ‘enchanting’ figure wearing a cloak.6

In another case, information said to have been conveyed by an apparition led to the discovery of a coffin hidden beneath another coffin in the ruins of the Abbey Church. It contained the bones of a man with ‘a hole in his skull, and a crown’.7 According to a press report, Arthur Conan Doyle investigated this case with the help of a medium.8

Numerous investigations have been held at Beaulieu Abbey, both for research and for commercial entertainment. The Hampshire Ghost Club has held vigils there to which they have invited the public; it reported that a trigger object (a coin) moved during the course of an investigation, and that a table-turning experiment in November 2011 produced paranormal movements. A serious investigation by veteran members of the Ghost Club in January 1994 revealed no anomalous phenomena. An episode of the television programme Most Haunted was recorded at the Abbey on November 31, 2004, in front of an audience of five hundred guests.