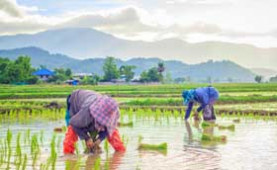 As as a young child in Thailand in the 1960s, Bongkuch Promsin remembered the life of Chamrat Pooh Kio, a boy from a Laotian farming family who was murdered at age eighteen. He spoke Thai with a Laotian accent, used Laotian words and was observed to converse in Laotian with friends of Chamrat.

Chamrat Pooh Kio was born in 1936 in Hua Tanon, central Thailand. The population on the north side of Hua Tanon includes large numbers of people from northeastern Thailand and Laos, whose forebears migrated to Thailand's fertile central valley. Chamrat's family was one of those of Laotian stock.

Chamrat left school after the fourth class and thereafter helped his family in farming and other work. He was murdered in 1954 aged eighteen, by which time he had been given a field and two cattle of his own. Chamrat was by nature placid and timid, and interested in religion. He had a regular girlfriend named Thien Boon Sim. One of the two murderers induced Chamrat to accompany him to a religious fair; there they stabbed him, dragged the body to a nearby field and abandoned it, having stripped it of a neck chain and wristwatch.

Bongkuch Promsin was born in 1962, the tenth of eleven children of Thai parents. The family lived near the town of Tha Tako, about nine kilometres to the west of Hua Tanon. His father was the headmaster of a local school. Aged about one year and eight months, Bongkuch began talking about a previous life, often in the moments after waking from sleep, repeating ‘this is not my home’. Aged two years, he gave more details, saying he had been called Chamrat, and describing various possessions. He also said he had been murdered by two men while attending a fair in Hua Tanon, the town where he had lived.

Bongkuch’s father had acquaintances in Hua Tanon, but neither parent had heard of a person or family corresponding to the child’s statements. Eventually word of them reached the family of Chamrat Pooh Kio. The family made two visits to the Promsin family in 1964 and verified nearly all Bongkuch’s statements as true for the life and death of Chamrat.

Two local newspapers published reports of the case in 1965. Three physicians in the locality followed this up with their own investigation and wrote a report. In 1966, Ian Stevenson, assisted by Francis Story, spent three days in the locality interviewing informants, and made follow-up visits in 1969, 1974 and 1980. Besides Bongkuch himself, Stevenson interviewed a total of sixteen people, including members of both families, friends, neighbours and police officials. He wrote up his report for the fourth volume of his Cases of the Reincarnation Type series, published in 1983.1

Living just ten kilometres apart, the two families paths might have crossed. However, each denied any knowledge of the other prior to the development of the case. The Bongkuch family did not know of the murder of Chamrat, which occurred eight years previously and might have been little noticed in a district where at this time as many as forty murders took place every year.

Bongkuch made a total of 34 statements relating to Chamrat’s life and circumstances, of which all but ten were made before the two families met. Some, for instance those relating to the way he was murdered, could not be verified. Others were general or applicable to any young man, for instance that he owned a knife. Correct statements included the fact that his name was Chamrat, that he lived at Hua Tanon and that he was Laotian.

Bongkuch seems also to have recognised Chamrat’s younger sister, his older stepbrother and his girlfriend Thien, although some of the witness testimony is discordant on this point.

Unlike the subjects in other similar cases, Bongkuch did not often speak spontaneously about the previous life, and did so mainly when going to sleep or awakening. An exception was when he was seen beating a post with a stick and repeating angrily ‘Bach Ban and Bach Maa, I am going to kill you’ (ie, naming the two police suspects).

The earliest incident occurred when he woke and said he wanted to go home; later he woke and called to his mother, telling her he had dreamed of his other father and mother. On one occasion he woke and told her he was not her son but was grown-up.

Bongkuch’s statements were often stimulated by seeing something that reminded him of his past life. When visiting the Pooh Kio family at Hua Tanon, his family noticed him looking intently at the roof of the house. The Pooh Kios later stated that the roof had been built by Chamrat himself, and that the family had only just moved into the new house on the day he was killed.

Bongkuch showed great assurance about his memories. On one occasion, when Chamrat’s mother was describing the clothes that Chamrat had been wearing when he was murdered, he interrupted her to correct the details. These could not be completely verified, but observers were struck by his certainty. (Bongkuch was aged two-and-a-half at the time.)

Like subjects of other similar cases, Bongkuch, between the ages of two and four, strongly insisted that his parents take him to the family of the previous personality. During a car journey that happened to pass through Hua Tanon, Bangkuch demanded to get out there, and cried when they did not stop. A similar incident occurred on the return journey, when Bongkuch again wanted to stop at Hua Tanon to see his ‘father and mother’.

Chamrat’s mother Siri Nuan died in 1965 when Bongkuch was three years old, the year after the two families first made contact. Chamrat’s father died two years later. On both occasions Bongkuch demanded to be taken immediately to visit the family, and wept when he arrived there.

As an infant, Bongkuch showed a vengeful attitude regarding Chamrat’s murder. On Stevenson’s first visit he said he wanted a real gun so that he could kill ‘those two men’, and added: ‘I am going to kill them when I grow up.’ He also expressed fear that they were going to kill him. By 1969, he expressed this anger only when he was going to sleep.

Bongkuch occasionally experienced episodes when he behaved as if he believed himself to be an adult. At such times he might say he was eighteen, that he wished to be shaved and that he intended soon to become a monk. He was also sexually forward with grown girls, attempting to fondle their breasts. In other respects he showed the modesty typical of adult Thai males.

Bongkuch showed a number of traits consistent with his belief that he was of Laotian origin. He craved foods such as sticky rice, noodles and namphrik with fermented fish, which are popular among Laotians but not with Thais. Reproached for this, he replied: ‘I am not a Thai. I am Laotian.’ Bongkuch ate in the Laotian manner with his hands, as Chamrat’s family did, while the rest of Bongkuch’s family ate in the traditional Thai manner with a spoon.

Xenoglossy refers to the use of language carried over from a previous life, but unlearned in the present life. Chamrat's family spoke Laotian, not Thai, and his language skills carried over into his life as Bongkuch.

As an infant Bongkuch startled his mother by referring to certain fruits and vegetables with words that were unfamiliar to her and which turned out to be Laotian. For instance, he referred to eggplant/aubergine as bugkeua instead of the Thai word makeua, guava as bugsida instead of varang, papaya as bughoong instead of malagor. His family were pure Thais, like almost all the residents of their village, and the infant would have had no opportunity of picking up these words. There is some evidence that Bongkuch could speak Laotian with Laotian-speaking people, however.

Chamrat’s family accepted that Bongkuch was Chamrat reborn. Bongkuch’s father claimed he had learned indirectly of a scheme by Chamrat’s father to ‘buy Bongkuch back’ with an offer of 20,000 baht ($1,000) which they planned to raise from the sale of land. However, Bongkuch’s father said he would have had unhesitatingly refused such a proposal. Unlike the parents in other such cases, Bongkuch’s parents were enthusiastic about their child’s memories, possibly deriving satisfaction from their support of Buddhist teachings and the attention they brought.

Bongkuch’s memories had begun to fade when Stevenson made his second visit in 1969. In 1971, he was said to be gradually forgetting the previous life, and had stopped talking about getting revenge. By 1974 when he was twelve, he no long spontaneously spoke about it, partly because he was being teased for his Laotian behaviour by his siblings. But he retained some of his pronounced dietary preferences, such as sticky rice.

As an educated man, Bongkuch’s father was in a better position than many parents in such cases to observe and recall accurately. Stevenson found no significant discrepancy between the accounts of both parents, whom he interviewed separately. Two older siblings and a neighbour provided corroborating testimony. Stevenson found no indication that Bongkuch’s parents had exploited his statements or behaviour, whether for fame or money. There was no obvious motive for a Thai family to invent memories on behalf of their son of having been Laotian, which had the effect of making him a misfit. It might also have exposed them to the risk of retaliation from the murderers of Chamrat, who were never brought to justice and remained in the area.

Stevenson argues against the possibility of cryptomnesia in this case. He found no evidence that the families had had any direct contact before Bongkuch made most of the statements. The gap of ten years between Chamrat’s death and Bongkuch’s first utterances meant it was unlikely the incident would still be the subject of conversations that Bongkuch might have heard, even supposing he could have come into contact with such persons as an infant without his parents being aware of it.