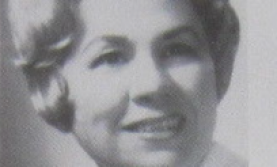 Virginia Burns Tighe (1923-1995) was a Chicago resident who under regression hypnosis offered surprisingly accurate details of life in Ireland in the nineteenth century. The details were published by the regressionist Morey Bernstein 1956 in a bestselling book The Search for Bridey Murphy, in which Tighe is referred to as Ruth Simmons. This was the first major reincarnation claim in the West in modern times, and the focus of intense media interest and controversy.

Virginia Burns Tighe (also known as Virginia Mae Morrow) was born 27 April 1923 in Madison, Wisconsin, USA. Following the separation of her parents she lived with an aunt in Chicago, where she attended school and later studied at Northwestern University. Aged twenty, she married an American soldier who was killed a year later. Subsequently she moved to Denver, Colorado, married a businessman, Hugh Brian Tighe, and had three children. The family later moved to Pueblo, Colorado. She was 29 at the time of the first Bridey Murphy regression.1

Tighe was shy of publicity, once commenting, ‘If I had known what was going to happen I would never have lain down on the couch’.2 She never sought financial gain from her experiences, continuing as a home maker. She eventually separated from Hugh Tighe, marrying Richard Morrow and raising two stepchildren. She died in 1995, aged 72, leaving ten grandchildren.3

In Pueblo, the Tighes became acquainted with Morey Bernstein, a businessman and experienced amateur hypnotist. Bernstein became interested in reincarnation after learning about the psychic healer Edgar Cayce, and studied a number of investigated reincarnation cases. He decided to try regressing a subject to times prior to birth, choosing Tighe who he found had an ability to reach a deep trance. He hypnotized her six times over a period of ten months starting November 1952, recording and transcribing each session. The transcripts form the core of his 1956 book The Search for Bridey Murphy.4

In the first session, Morey regressed Tighe to a time prior to her current life. She began speaking with an Irish accent, saying she’d scratched paint off a metal bed in anger at age four. Morey then questioned her about matters that he hoped might be verified through historical records, receiving the following replies:

In subsequent sessions, each witnessed by around half a dozen people, she repeated much of this information unchanged. She also provided further details such as:

Tighe sang a children’s song, recited a pre-meal blessing, described a day in her life she particularly liked, and drew a map of the location of the Murphy house in relation to the church in Cork.

When Tighe (as Bridey) said she knew a dance called the Morning Jig, Bernstein decided to ask her to perform it when awake. She hesitated but then, he writes:

Suddenly her whole expression changed; her body became vibrantly alive; her feet were flying in a cute little dance. There was a nimble jump, and then the dance seemingly ended with a routine which involved pressing her hand to her mouth in a mock yawn. Bridey then reverted to Virginia and had no idea what she had just done.5

Shortly after the third session, a friend of Bernstein researched details that Tighe had given as Bridey. He verified the existence of the Belfast News-Letter, Queen’s University, The Sorrows of Deirdre and the details of the Cuchulain story. A location that she mentioned called ‘Bayling’s Crossing’ could not be found on any map, but was known to a friend of the Bernsteins who had visited Ireland and had bicycled through it many times. St Theresa’s Church was not in the Belfast phone book, but the facts of its existence and its Roman Catholic denomination were confirmed by the British Information Service.

An English author who listened to the relevant recording said that a ‘brate’ or cup that was wished upon was actually a ‘quait’. A thesaurus confirmed that the word ‘tup’ was correctly used.

Verification efforts in Ireland were arranged following the final session and were carried out by an Irish law firm, librarians and other investigators independent of Morey. It was found that no registers of births, marriages or deaths were maintained in the area before 1864, and it became apparent that a full investigation would be a larger undertaking than previously thought. However, Bernstein’s book had been scheduled for publication in fall 1955, so it was decided that it would include only those verifications that could be found by the early part of that year. These included the existence in Cork of

The research also established that

No answers were received from St Theresa’s church, and there had not been sufficient time to search for Brian’s articles in the News-Letter or for university records of Brian’s colleagues at Queen’s.

The regressions were first published in three parts under the title ‘The Strange Search for Bridey Murphy’ in Empire, the Sunday magazine of the Denver Post, in September of 1954. This was followed by ‘More About Bridey’ in the same publication on 5 December.

Bernstein’s The Search for Bridey Murphy followed in January 1956; a second edition with added verifications was published in 1965. At Tighe’s request her name was given as ‘Ruth Simmons’. The Chicago Daily News, which was publishing the book as a serial, sent its London reporter to Ireland for three days to verify additional details, to no avail. However, William J Barker, a reporter at the Denver Post, spent three weeks there and wrote a twelve-page supplement entitled ‘The Truth About Bridey Murphy’ on 11 March 1956, giving details of verifications he had been able to confirm.

The Search for Bridey Murphy became a bestseller almost upon publication, spending 26 weeks on the New York Times bestseller list with two hundred thousand copies sold in two months. It was eventually published in thirty languages in 34 countries. Books on hypnosis in general saw a 25-fold increase in sales.

Later in 1956, Paramount Studios translated Bernstein’s book into a motion picture of the same title, starring Teresa Wright as Tighe, Louis Hayward as Bernstein, and four different actresses as Bridey Murphy at different ages.6 The film can be viewed on YouTube here.

According to the New York Times, ‘Bridey Murphy became a 1950s phenomenon rivaling the Hula-Hoop. There were Bridey Murphy parties (‘come as you were’) and Bridey Murphy jokes (parents greeting newborns with ‘Welcome back’)’. The case triggered strong interest in reincarnation and hypnotic regression.7

The sudden emergence of the reincarnation hypothesis into public attention triggered impassioned attacks from science and religious skeptics.8

Life magazine took an adversarial position with a two-part article published on 19 March 1956, the first part addressing details Tighe had given, the second presenting the views of two psychiatrists. The Denver Post fought back with an article on 17 June. On 25 June, Life pronounced the case debunked and closed. Debunking articles were published in May and June in the Chicago American, San Francisco Examiner and New York Journal American, all owned by Randolph Hearst. The controversy continued in print for some years. Today the episode is widely believed to have been debunked.9

CJ Ducasse, an American philosopher who published a major study on psi research, noted that regression details which the Life article claimed were inaccurate were in fact confirmed by other researchers:

The Chicago American based its attack on the claim of cryptomnesia, that is, that Tighe had actually recalled events that took place during her own childhood, deriving information on Ireland from people she knew. However, the article sometimes departed from truth, for instance claiming the memory of a second brother who died as an infant was based on the death of Tighe’s own brother, when she had no brother. The story also implied a minister who had been quoted about Tighe knew her as a child, which was not the case.

The Chicago American claimed Tighe had an Irish aunt who’d regaled her with tales of Ireland. However, the aunt, Mrs Marie Burns, was born in New York and spent most of her life in Chicago; Tighe said she was eighteen when she came to know her.

The Chicago American also claimed that a Mrs Bridie Murphy Corkell had lived across the street from a house in which Tighe had lived as a child. However, Mrs Corkell refused to speak to the Denver Post, which as a result was unable to verify that her maiden name was Murphy. However, she was revealed to be the mother of the editor of the Sunday edition of the Chicago American at the time the articles were published.

Regarding the comments of psychiatrists, Stevenson noted that they tended to base their arguments on the assumption that Tighe must have acquired the information by normal means, which Ducasse points out is ‘not scientific procedure’.11

In his discussion of the case, Ducasse concludes that, while it does not prove that Tighe is the reincarnation of Bridey Murphy, since her existence was not confirmed historically, it does provide evidence that paranormal knowledge of obscure aspects of nineteenth-century Ireland was given under hypnosis.

Reincarnation researcher James G Matlock states that Tighe’s apparent ability to accurately remember details of a nineteenth-century Irish past life, but not her name or the names of others, is a pattern found in numerous regression cases, which he calls the ‘Bridey Murphy effect’.12

Bernstein’s recording of the first session with Tighe was made into a vinyl record, from which the audio is now available as YouTube video:

The Search for Bridey Murphy Experiment No.1, Pt.1

The Search for Bridey Murphy Experiment No.1, Pt.2

Virginia Tighe appears on the game show To Tell the Truth on 4 April 1966.

Ducasse, C.J. (1961). Ch. 25: The Case of ‘The Search for Bridey Murphy’, in A Critical Examination of the Belief in a Life After Death. Springfield, Illinois, USA: Charles C Thomas. [Online version has no page numbers.] 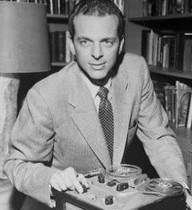