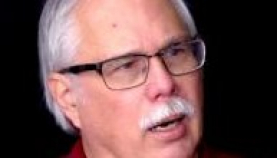 James G Matlock (b 1954) is an American anthropologist and leading reincarnation researcher. He has adopted a comprehensive, multicultural and interdisciplinary approach to reincarnation studies, and has advanced a theory on how it happens, the ‘processual soul theory’.

James Matlock was born 1 June 1954 in Hanover, New Hampshire, USA, the son of American diplomat Jack F Matlock Jr and his wife Rebecca, the eldest of five children. His father’s employment necessitated many international moves: Matlock lived as a child in five countries in addition to his native America: Austria, West Germany, the Soviet Union, Ghana and Tanzania. He estimates that he has visited more than thirty nations.1

Matlock earned an English BA from Emory University in 1977. He almost acquired a second BA in psychology, before being discouraged by the behaviourism and materialism he was being taught.  His first ambition was to be a creative writer; he recalls dictating stories to his mother before he could write.2  Unable to progress at fiction he visited his local library in Arlington, Virginia, in search of ideas for non-fiction writing and encountered books about reincarnation, a topic he had previously been intrigued by.

Matlock began collecting past-life regression accounts, recording each in detail on an index card.  He noticed books by Ian Stevenson in the library stacks, but left them until he had finished his analysis of the regression accounts. When he turned to Stevenson he was impressed by the scientific rigour of work carried out in his field research on spontaneous cases, with its emphasis on careful investigation and documentation of evidence, and verification of claimed past-life memories. Matlock decided to adopt a similarly scientific approach. He became involved with parapsychology, subscribing to journals and attending conferences.3

In 1983, Matlock began post-graduate work in library science at the University of Maryland, concentrating in archives. He received his MLS in 1985 and was offered the job of Librarian and Archivist with the American Society for Psychical Research (ASPR) in New York. In 1989, he was commissioned to organize the collection of JB Rhine’s Parapsychology Laboratory at Duke University in Durham, North Carolina.

For his library science work Matlock wrote a survey of archival collections in parapsychology, which was later published.4  While working as ASPR librarian and archivist, he began writing papers on the history of parapsychology and on reincarnation.5  He published the introduction to his inventory of Rhine’s Parapsychology Laboratory Records in 1991.6

Becoming dissatisfied with a career as an archivist, Matlock began studying for a master’s degree in anthropology at Hunter College of the City University of New York.  He received his PhD at Southern Illinois University at Carbondale in 2002 and in 2004 went to the Rhine Research Center in Durham, North Carolina, for two years.

By this time Matlock was married and had a daughter, Cristina.  At the age of three she began saying she remembered a past life. He discussed her memories with her as she became older; this gave him the opportunity to test some of his ideas, and he credits these exchanges as an important influence on his thinking.7

At Hunter College Matlock quickly learned that tribal peoples worldwide believed in reincarnation, which in some cases informed their social customs.  He arranged to make this the topic of all his term papers as well as his MA thesis.8 In 1990 he published a paper about reincarnation, naming and inheritance patterns among the Tlingit and Kwakuitl Indians,9 along with others taking an anthropological approach, including an index of reincarnation beliefs among North American tribal societies co-authored with anthropologist and reincarnation researcher Antonia Mills.10

In 2011, Matlock was invited to write a historical review of Stevenson’s classic work Twenty Cases Suggestive of Reincarnation for the Journal of Scientific Exploration,12 and to teach a reincarnation course in a proposed graduate program in parapsychology at Atlantic University. The program did not come about, but Matlock completed development of the course nonetheless and began teaching it online in 2014 under the title ‘Signs of Reincarnation’.13

In 2014, Matlock founded the only Facebook group devoted to discussion reincarnation using the scientific approach, also titled ‘Signs of Reincarnation’, which he continues to run. It has become the largest reincarnation group on Facebook with more than 30,000 members as of this writing.

In 2016, he published a book on children’s reincarnation cases in collaboration with psychologist and parapsychologist Erlendur Haraldsson, entitled I Saw A Light and Came Here: Children's Experiences of Reincarnation.  He took part in a written debate with skeptical authors conducted by the Journal of Parapsychology in a special book review section edited by John Palmer in 2016,14 (the first major publication on survival theory undertaken by this journal). Since 2017, Matlock has contributed many articles to the Psi Encyclopedia on reincarnation and other topics (see under Works, below). Increasingly in recent years he has undertaken investigations of individual reincarnation cases.

Matlock transformed his ‘Signs of Reincarnation’ course lectures into a book, introducing it with a strong child case he himself investigated and adding other new material, and published it in June 2019 under the title Signs of Reincarnation: Exploring Beliefs, Cases, and Theory. He considers this the culmination of his work so far.15

Matlock retains the goal of many others in parapsychology: to convince scientists outside the field to recognize its validity and learn about its research results. Feeling that a theory of reincarnation was crucial for such acceptance, he proposed what he calls the ‘processual soul theory’, based largely on the child case data from Stevenson and other researchers, and developed within his ‘Signs of Reincarnation’ course and book.

The theory holds that what survives death is the ‘mind’, ‘soul’, ‘psyche’ or ‘stream of consciousness’, terms which Matlock uses interchangeably. It is comprised of both of what Frederic WH Myers called the supraliminal mind (or waking consciousness) and subliminal mind (subconscious). Information of all types – memories of facts and experiences, skills, habits, preferences, emotions and residues of physical injuries, which can then manifest upon reincarnation as birthmarks that resemble scars – are held permanently in the subliminal mind. The subliminal mind customizes each new body by psychokinetic actions affecting the genome, tissues, brain and physiological aspects, while the supraliminal mind undergoes a ‘reset’ upon coming into association with each new body, losing the ability to retrieve remembered information from prior to the start of the new life. Material from the subconscious may continue to influence behaviour, however, and from time to time may rise into conscious awareness as past-life memories.

Processual soul theory rejects retributive karma as an active mechanism, though Matlock acknowledges what he calls 'processual karma', the carryover of psychological dispositions and conflicts from one life to the next. The theory rejects also the possibility that reincarnation can occur between species that cannot interbreed, arguing that consciousness has evolved along with the physical body. Neither does it support New Age ideas of ‘soul groups’, detailed life planning and mandatory spiritual learning or development, evidence for which Matlock does not see in the cases he and other researchers have studied. However, it understands reincarnation to play a role in species adaptation and hence evolution.16

Many of Matlock's more important articles are listed in the Literature section, below. For a complete list of his publications, see here. For a partial list of his book reviews, see here.

Matlock writes an occasional blog on reincarnation-related topics. He has also authored numerous articles for the Psi Encyclopedia, as listed on his author page, here. Key items include:

Matlock recorded a series of twelve video interviews with Jeffrey Mishlove, based on Matlock’s ‘Signs of Reincarnation’ course. They were released in 2017 and 2018 on Mishlove’s ‘New Thinking Allowed’ YouTube channel:

Birthmarks and Physical Signs of Reincarnation

The Interval between Death and Rebirth

The Psychology of Past Life Memory

Reincarnation in the Ancient World

The Process of Reincarnation

He also sat for an interview for Parapsychology Foundation's 'Face to Face' series on 20 November 2019 and made a video,  What Evidence do We have for Reincarnation?, for their ‘Psi Bytes’ series on 7 June 2018.

In addition, the Rhine Research Center has posted a video of a talk he gave on 12 July 2019 (membership required for access).

Matlock's twelve videos for New Thinking Allowed have been converted to audio and they along with podcasts of other interviews he has conducted have been collected in a folder for download from here.

Podcasts of interviews Matlock has done include the following:

Signs of Reincarnation - The Evidence-Based Research and Limitations of Science for The Dream World, 22 July 2021

Ramjam interview with Russ Townsend about the scientific study of spontaneous past life memories, October 2020.

Past Lives Podcast Ep 71 with Simon Bown on his book Signs of Reincarnation: Exploring Beliefs, Cases, and Theory, 7 July 2019.

Past Lives Podcast Ep 54 with Simon Bown on reincarnation and children that remember past lives, 10 March 2019.

Matlock, J.G. (2016a). The myth of mortality: Comments on Martin and Augustine’s The Myth of an Afterlife. In Special book review section: Do we survive death? A philosophical examination, ed. by J. Palmer, 190-203. Journal of Parapsychology 80, 169-264.

Matlock, J.G. (1991). Records of the Parapsychology Laboratory: An inventory of the collection in the Duke University Library. Journal of Parapsychology 55, 301-14.

Matlock, J.G. (1990a). Of names and signs: Reincarnation, inheritance and social structure on the Northwest Coast. Anthropology of Consciousness 1/3-4, 9-18.