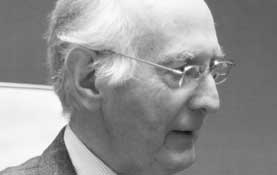 Erlendur Haraldsson (b 1931) is an Icelandic academic psychologist and psi researcher, who has published extensively on topics such as past life memories and survival encounters.

Erlendur was born near Reykjavik in Iceland in November 1931. He prefers to be called Erlendur, as Icelanders usually have no family names (they are listed in the telephone directory by their first names and are further identified by the Christian name of their fathers).

In his early youth Erlendur had a transformative experience that he described in an interview:

When I was around 15, I became like reborn to myself, and became aware of some inner reality that was also mysteriously external, and so immensely greater than anything I had experienced or been aware of before. It started suddenly in heavy rain during the middle of the day, near some banks of pebbles on the seashore that lit up as the sun suddenly shone and reflected on them. Then I had the experience of being filled with light that was immensely delightful and beyond words. After a while this faded away but a vivid trace of it remained with me and would sometimes – especially in my youth – sweep over me again. After that there was never a doubt that there existed a superior/supernatural reality that was sometimes closer and sometimes further away from my normal self.1

At university Erlendur studied philosophy, a subject in which he had long been interested. In addition to the academic philosophers he studied unorthodox figures such as Martinus, Paul Brunton, PD Ouspensky, also theosophical writings and Evans-Wentz’s translations of Tibetan texts. His philosophy studies spanned more than four years at the universities of Copenhagen, Edinburgh and Freiburg. In Freiburg he also attended the lectures of Professor Hans Bender on parapsychology, being impressed by Bender’s empirical approach and the significant amount of research that had been done in that field.

After a year and a half at the University of Freiburg he returned to work in Iceland, mostly as a journalist.

Early in 1962 he went to the Freie Universität Berlin to continue his studies, switching to psychology. The Berlin wall had just been built, and the city was a major place of friction between the superpowers. His newspaper colleagues wanted first hand news from Berlin and soon he found it more interesting to follow events there than to study. He gained access to the Berliner Pressekonferenz where he could listen to Willy Brandt, the mayor of West Berlin and later Germany’s chancellor. He also attended press conferences of famous directors and film stars at the Berlin Film Festival.

The Freie Universität required foreign students to attend a German language course. There Erlendur met students from Kurdistan, particularly those from the Iraqi and Iranian regions. (Kurds are minorities in four countries – Turkey, Iran, Iraq and Syria.) He came to like the Kurds and developed a keen interest in their politics. At the time, a civil war was raging in Iraq between Kurds fighting for autonomy and the government in Baghdad. Erlendur became a freelance writer and travelled widely through the Middle East, among other things writing reports on the Iraqi Kurd rebels. particularly their struggle for autonomy in Iraq. There followed travels through Iran, Pakistan and to India where he stayed for a year, writing his first book, on Kurdish political history.

Erlendur had corresponded with the pioneering psi experimentalist JB Rhine occasionally over the years, and in 1969, when he had completed his psychology degree, Rhine welcomed him to his Institute of Parapsychology at Durham, NC,  where he stayed for a year.  There he conducted experiments on physiological measurements of ESP for his doctoral thesis with Bender. He also conducted an experiment using a random number generator (RNG, Schmidt machine) obtaining significant results with highly selected subjects and with himself as the subject.

Ian Stevenson at the University of Virginia

There followed a year of internship in clinical psychology at the University of Virginia in Charlottesville, where he came to know Dr Ian Stevenson. This lead to a life-long association and the publication of three joint papers on the mediumship of Hafsteinn Björnsson, and later to many years of involvement in the study of children claiming memories of a previous life (see below).

In 1972, Erlendur completed his PhD in psychology with Bender at the University of Freiburg. That year he joined Karlis Osis at the American Society for Psychical Research and collaborated with him in a large-scale study of deathbed visions in India and the US. The work resulted in a book, At the Hour of Death, which appeared in many languages and editions.2 (See Deathbed Visions)

1974, Erlendur joined the department of psychology at the University of Iceland. He conducted a major survey on psychical and religious experiences and beliefs. A striking result was that 31% of a large national sample reported encounters with someone who had died. (This was confirmed by the European Value Survey conducted several years later in most countries of Western Europe, which revealed that one-fourth of the population believed they had had an encounter with someone who had died.)  Erlendur’s research led to the publication of papers3 and a book, The Departed Among the Living.4

While Karlis Osis and Erlendur were researching deathbed visions in Indian hospitals, they learned of the religious leader Sathya Sai Baba, who was reputed to produce miraculous phenomena. They therefore made two visits to South India where he lived. They failed to convince him to take part in experiments but made some very puzzling observations and heard of many more.5 Erlendur made an extensive study of the subject during follow-up visits, leading to the publication of several papers and a book, Modern Miracles: Sathya Sai Baba, A Modern Day Prophet.

Encouraged by Ian Stevenson, Erlendur started in the late 1980s to investigate cases of the reincarnation type, first in Sri Lanka (64 cases) and later in Lebanon (30 cases). He published many papers on these investigations and three psychological studies that followed.  Three documentaries were made of these cases, by the BBC and Channel Four in Britain, and by Storyhouse Productions in Washington DC.

Erlendur has published about one hundred papers in peer-reviewed journals and contributed numerous book chapters. Of his eight books, seven describe some aspect of the paranormal or psychical research; five have appeared in English. He has lectured worldwide. He has received two major awards: the Myers Memorial Award from the Society for Psychical Research, and an Outstanding Career Award from the Parapsychological Association.

Further information can be found on Erlendur’s homepage

Haraldsson, E. and Osis, K. (1977). The appearance and disappearance of objects in the presence of Sri Sathya Sai Baba. Journal of the American Society for Psychical Research 71, 33-43.

Erlendur Haraldsson (2012). The Departed Among the Living: An Investigative Study of Afterlife Encounters. USA and UK: White Crow Books.

Osis, K. and Haraldsson, E. (1977a). Deathbed observations by physicians and nurses: A cross-cultural survey. Journal of the American Society for Psychical Research 71, 237-259.