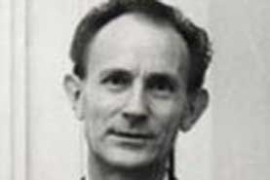 Karlis Osis (1917-1997) was a leading figure in parapsychology in the second half of the twentieth century. He is noted specially for his research on deathbed visions and out-of-body experiences but he also conducted important experimental tests of ESP under a variety of conditions.

Karlis Osis was born in Riga, Latvia, on 26 December 1917 and grew up in a rural part of that country. His interest in psi was piqued by experiences that occurred to him and his family when he was young.

Just before he began high school, he came down with tuberculosis, which in those days before penicillin was often a death sentence. He had no choice but to lie in bed and rest and it was then that he had his first profound psychic experience. As he later described it:

It was dusk in my room when it happened. All of a sudden a tremendous wave of joy, of such an unusual quality, came over me. I had not heard of anything like it before. The room seemed to fill with white light; not something by which one can read, but ‘light’ is the closest word I can find to describe it – living light – not only in the room but also in me, filling me up to my fingertips. Then the door opened and a relative announced, ‘Auntie just died’. My experience and her death were surely simultaneous.1

This experience set Osis ‘onto the road of research. Belief was not enough; I had to know’, he later wrote.2

There were other experiences also. His grandfather had an unusual dream, in which he put boots on the feet of the Latvian president. The dream greatly perplexed him, but it turned out to be a symbolic foreshadowing of the president’s visit to their area two days later.

On his visit, the president recognized Osis’s grandfather as someone he had met earlier in his career, when he had taught new agricultural techniques to farmers in the region. Seeing how well they had applied his instruction, he got out of his car to greet Osis’s grandfather, then returned two weeks later with half his cabinet and a press entourage. The story, along with a photograph of Osis’s grandfather with the president, made the newspaper's front page. Although the president wore regular shoes, not boots, the precognitive aspect of the dream impressed Osis as well as his grandfather.3

Osis barely avoided being conscripted by the German army when they occupied Latvia from 1941 to 1944 during World War II. He fled Latvia at the close of the war, because the Soviet Union had annexed his country as the Latvian SSR. After difficult travels through war-ravaged Europe, he found a safe haven in a refugee camp in the American part of the Allied Occupation Zone in southern Germany.4

Osis enrolled at the University of Munich. There he encountered The Reach of the Mind by JB Rhine, an account of research with card guessing and dice throwing at the Parapsychology Laboratory at Duke University in the United States. Intrigued, he had decks of ESP cards manufactured by a blueprint company and experimented with his fellow students. The statistically significant results they obtained convinced Osis of the validity of Rhine’s research. His doctoral thesis on theories of ESP  was accepted in 1950.5

Osis married in 1951 and applied to the American displaced persons immigration program. He and his new wife were accepted and sent to Tacoma, Washington, where Osis was assigned to work at a sawmill.6

Osis’s English was then so poor that he decided to experiment with animals other than humans. He placed some grain at one end of a long table, then released hens in the middle of the table and willed them to go either towards or away from the grain. He chose left if a black card came up in a well-shuffled deck, right if a white card came up. At the end of the experiment, he checked his results, and found that the hens had gone in the direction he had willed often enough to give him ‘moderately significant scores’ in the willed direction.7

After leaving Rhine, Osis went to the Parapsychology Foundation in New York, where he served as Director of Research until 1962.11  During this period, he collaborated with Montague Ullman and Douglas Dean on a study of ESP in dreams, helping to develop a 'free response' methodology that contrasted with the ‘forced-choice’ card guessing experiments Rhine used and which until then had dominated  experimental research in parapsychology.12

In 1962, Osis moved across town to the American Society for Psychical Research (ASPR), at that time a leader in American psi research strategies alternative to those favoured by Rhine. The ASPR was supported by Chester Carlson, founder of the Xerox Corporation. Osis was made Chester Carlson Research Fellow and the ASPR’s Director of Research.13

At the ASPR, Osis conducted some his most important studies, some experimental, but increasingly also questionnaire and field research on spontaneous experiences. He was greatly interested in questions of survival, of ‘other-worldly’ experiences and altered states of consciousness. For him, the ‘other world’ was never far away, and this is reflected in his studies of mediums, apparitions,  deathbed visions, and out-of-body experiences.

Osis’s many friends were found not only amongst parapsychologists, but almost equally amongst leading scholars of consciousness and religious experiences, such as Aldous Huxley, Walter Huston Clark, and others of the early researchers of psychedelic substances. Osis was a welcome guest at their conferences. He cherished the ‘wider view’ and parapsychology was for him ‘my window to something more’.14

Osis was a founding member of the Parapsychological Association (established in 1957) and its fourth president in 1961-62. He regularly attended PA conventions and presented numerous papers at them.15

Osis became a naturalized American citizen in 1959.16 He died on his eightieth birthday, 26 December 1997, and was survived by his wife and their three children.17 Several of his friends and colleagues contributed tributes to a special issue of the Journal of the American Society for Psychical Research.18

Osis was an innovative experimenter who made contributions to several areas of psi research. Besides his studies of ESP in animals, while at Rhine’s Parapsychology Laboratory and at the ASPR he studied the impacts of distance on ESP, finding, contrary to expectation, that results fell off with distance.19 He also studied precognition,20 the relation of ESP to creativity,21 and examined whether ESP was enhanced by meditation.22 His work with Montague Ullmann and Douglas Dean led to the studies of ESP in dreams at Maimonides Hospital in the 1970s23 and to Ganzfeld protocols widely employed in parapsychology today.24 While he was with Rhine, Osis also examined the relationship between ESP and psychokinesis (PK), testing Rhine's theory that these two aspects of psi operated together.25

Over the years, Osis’s research interests shifted towards postmortem survival and he carried out studies of poltergeists and with mediums.26 He may be best known for his questionnaire and interview studies of visions reported to nurses and physicians by patients near death or dying (deathbed visions).

Osis conducted his first study of deathbed visions while at the Parapsychology Foundation and wrote up his results for the PF’s monograph series.27 Later, when he was at the ASPR, he and Erlendur Haraldsson conducted a similar study in India, supplying a cross-cultural comparison. Osis and Haraldsson reported their research in At the Hour of Death, a book which has become a classic and remains in print.28

While Osis and Haraldsson were in India, they visited Sathya Sai Baba, the Indian spiritual leader noted for materializing objects out of the air, bilocation, and other psychic feats. Although they were unable to persuade him to participate in controlled testing, they were witness to some extraordinary events and wrote two journal papers about their observations.29

Osis identified these experiences with Sai Baba as those that had most challenged his ‘boggle threshold’.30 Pressed to explain why he would not submit to scientific investigation of his abilities, Sai Baba materialized a gold ring with a photo of himself embedded in it and presented it to Osis, saying, ‘That is my experiment’. The next time Osis and Haraldsson visited him, he caused the photo miraculously to vanish, leaving the rest of the ring intact.

Osis and Haraldsson presented a paper at a meeting of the Parapsychological Association on OBEs in connection with Sai Baba and another Indian swami, Dadaji.31 Osis also investigated OBEs in a series of experiments at the ASPR, working with psychics Alex Tanous and Ingo Swann, who claimed to be able to go out of body at will and to observe and interact with things at the distant locations to which they travelled.32 In one study, Swann’s EEG readings were sampled both during periods when he was trying to go out-of-body and when he was not. The mean EEG amplitude was found to be higher during the OB periods.33

In another experiment, Tanous, lying in a darkened, sound-attenuated room, was asked to go out-of-body and view the image displayed in a specially-constructed eighteen-inch cube suspended from the ceiling. Sensitive strain-gauge sensors were placed in front of the viewing window. In 197 trials over twenty sessions, Tanous called the image correctly 114 times and incorrectly 93 times The strain gauge was affected on the same trials as the ‘hits’ were made. Osis interpreted these results as supporting Rhine’s contention that ESP and PK go together, as well as of the possibility for consciousness to separate from the body.34

At the Hour of Death (1977, with Erlendur Haraldsson). New York: Avon Books.

At the Hour of Death: A New Look at Evidence for Life after Death (3rd ed.) (1997, with Erlendur Haraldsson). [Revised ed. of At the Hour of Death, Avon Books, New York.] Norwalk, Connecticut, USA: Hastings House. [Reprinted 2012 by White Crow Books, Hove, UK.]

Osis's more important articles are listed in the Literature section, below. A comprehensive bibliography of his works,35 published in the Journal of the American Society for Psychical Research in 1998, may be viewed here.

Haraldsson, E., & Osis, K. (1977). The appearance and disappearance of objects in the presence of Sri Sathya Sai Baba. Journal of the American Society for Psychical Research 71, 33-43.

Osis, K. (1978). Out-of-body research at the American Society for Psychical Research. In Mind beyond the Body: The Mystery of ESP Projection, ed. by D. Scott Rogo. New York: Penguin Books.

Osis, K. (1987). The paranormal: My window to something more. In Men and Women in Parapsychology: Personal Reflections, ed. by R. Pilkington, 120-36. Jefferson, North Carolina, USA: McFarland.

Osis, K., & McCormick, D. (1980). Kinetic effects at the ostensible location of an out-of-body projection during perceptual testing. Journal of the American Society for Psychical Research 74, 319-30.

Osis, K., & McCormick, D. (1982). A poltergeist case without an indentifiable living agent. Journal of the American Society for Psychical Research 76, 23-51.