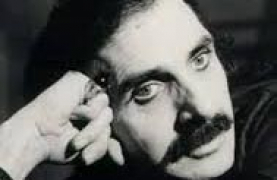 Alexander Tanous (1926-1990) was a noted New England psychic and parapsychologist.  He was a lecturer in parapsychology at the University of Southern Maine, a research participant/assistant for twenty years at the American Society for Psychical Research, and an international speaker in the media and in universities and colleges on parapsychology and well-being.

Alex Scandah Tanous was born on 26 November, 1926 in Van Buren, Maine, USA, to Lebanese parents Ann Alice Shalala and Thomas Tanous (Kettaneh), the eldest of eight brothers. His father was a friend of the Lebanese writer Kahil Gibran, author of The Prophet,1 who once predicted: ‘You will have a son, a man of exceptional gifts, of great abilities – but also a man of great sorrows.’

A number of curious incidents in his early life are documented in Tanous’s autobiography Beyond Coincidence.2 Touching a person would sometimes cause him to experience spontaneous precognitive visions.  In one instance, shaking the hand of his father’s friend, he asked ‘Sir, are you ready to die?’ and told the man he would be dead within twenty-four hours. His father scolded him, and the man laughed it off, but died the following day of a sudden heart attack.

Tanous discovered he could enter an out-of-body state one day when he was playing at jumping off the stairs. After one jump, he looked back up the stairs and saw an image of himself at the top staring back and smiling.  He named this double ‘Alex 2’. Similarly, he saw people around him who, when he described them to his parents and family friends, turned out to be deceased familiar members – a phenomenon he later discussed in his book Is Your Child Psychic?3

The most notable incident occurred in July 1937 when Tanous was selling newspapers with his brother Nolan, suddenly feeling that something terrible had happened to his father. They ran home and found he had suffered a serious accident, of which he died six weeks later.

Tanous’s psychic abilities sometimes created friction with the local community. However, he was more concerned about the reaction of religious teachers at his school: he had intended to become a priest, and was mindful that psychic abilities were considered evil, but found it impossible to suppress his frequent visions and premonitions. Although some priests felt he should have kept them to himself none ever criticized him for his abilities; one said Tanous was ‘a hundred years ahead of his time’.

Despite these reservations Tanous continued to entertain his fellow classmates with psychic readings. He also discovered an ability to absorb information by placing a book under his pillow at night, which he said helped him successfully complete his exams. He was often a straight ‘A’ student. He graduated from the former Van Buren Boys High School in 1944 and went on to serve in the military, where he found opportunities for making music. Subsequently he published songs, some of which achieved some success.

On his return from national service in 1953, he returned to education.  In 1957, he completed a Bachelor’s degree (BA) in history and government through Boston College, a Master’s degree (MA) in philosophy in 1961 from Boston College’s graduate school, a Master’s degree (MA) in theology in 1964 from Fordham University, a Doctorate of Divinity in 1965 from the College of Divine Metaphysics in Glendora, California, and a further Master’s degree (MS.Ed) in counselling and guidance in 1973 from the University of Southern Maine.  He was also a certified school psychologist for the State of Massachusetts.

When Tanous returned to higher education, he began to focus on his psychic abilities.  He continued to have out-of-body experiences in which he said he was able to travel to distant locations and report what he saw there.4 Cases of bilocation were reported, his double being seen at a distance from his real self.5 In one instance, Tanous woke in his home in New York having dreamed of visiting a friend in Canada, which he immediately wrote down. Subsequently he heard from the friend, who that same night had received an unexpected visit from Tanous. As he described the event, Tanous had knocked on the door apologizing for the lateness of the hour and explaining that he thought he would look in since he was in the area. The two spoke for a while, the friend’s wife listening from upstairs, and then Tanous left. However the friend did not hear Tanous’s car leaving, and when he opened the door he found no sign either of Tanous, or of a car, or any footsteps in the snow leading to or away from the house.  The events were later investigated and confirmed with signed affidavits.6

Over a period of twenty years Tanous offered himself as a research subject for the out-of-body state, working with Karlis Osis, an investigator for the American Society for Psychical Research.7 Tanous and Osis believed that successful out-of-body research might provide new evidence for the survival of death.

Accordingly, Osis and Donna McMormick8 carried out an experiment to try to detect activity by Tanous at times when he claimed to be ‘out of the body’ and at a distance from it. The experiment took place in a perception laboratory, where Tanous lay on cushions in a darkened room and begin to relax. Four rooms away was situated an optical illusion device, a box that contained a spinning disc divided into four quadrants, four colours and five line drawings.  The device randomly selected a quadrant, colour and symbol at which to stop spinning, which however could only be seen by an observer standing by the device and looking through a spy hole.  Tanous’s task, having ‘left the body’, was to look through the hole and state, from his physical body in the other room via an intercom to Osis, what was being displayed. At the end of the trial the device’s selections would be decoded to see whether Tanous’s observations were correct above the level of chance. In addition, a strain-gauge was placed next to the optical device to see if it activated during the experiment, and whether the periods of activation coincided with significant hits.

Both elements of the experiment were successful. The number of hits was found to be statistically significant and there was strain-gauge activation during periods when Tanous produced a sequence of correct hits.

Osis and McCormick defended their study against critical comment. To the suggestion that the positive reading of the strain-gauge was due to their inability to correctly use and read the instrument,9 they pointed out that Osis had used strain-gauges numerous times for research, and had earlier tested pilot participants before experimenting with Tanous, none of whom produced strain-gauge activation.10

Susan Blackmore argued that the researchers might have achieved a statistically significant result only by erroneously accepting a single item as a hit (a quadrant, a colour, a symbol).11 Osis and McCormick clarified that their calculation was in fact based on a combination of hits (one item correct, two items correct, all three items correct).  They added that the pilot test participants could not reach anywhere near the hit rate achieved by Tanous.12

Parapsychologists pointed out that if a paranormal explanation is accepted, it is still impossible to determine whether the experiment provided evidence for an ‘astral body’, the individual being genuinely ‘out of the body’ at a distant location – which could be construed as supporting the idea of survival of death – or whether the effects were merely caused by psi activity. In the latter formulation, correct perception of the optical information might have been achieved by Tanous by ESP at a distance, while the strain-gauge activation might have been a psychokinetic effect created by Tanous or even by the researchers.13 14

Osis and Tanous believed that survival could also be demonstrated through haunting phenomena, which they accordingly investigated on behalf of the American Society for Psychical Research.15 They were the first researchers, alongside Jerry Solvin (of the Psychical Research Foundation16), to investigate the Amityville case, concluding straight away that there was no substance to the claims of haunting.  Tanous stumbled on a publishing contract kept by the Lutz family, the house’s occupants, outlining a requirement to keep the story going in order to boost book and film royalties.  Tanous also refuted highly-publicized claims by clairvoyant Lorraine Warren that she sensed a presence within the property, having sensed nothing there himself.

Tanous claimed to project light images from his eyes onto walls.17

He described an incidence of this when he was visiting a family, projecting the head and shoulders of a man that moved across the wall, for which he gained a signed affidavit from the witnesses.18 Tanous was further tested for this at the ASPR19 and by Charles Honorton and Alan Vaughan at the Maimonides Medical Center.  In the latter case, the two researchers saw the images projected, and could find no conventional explanation, but surmised that it was a telepathic hallucination rather than an objective formation of light.20

Also scattered throughout the literature are accounts of Tanous’s healing abilities and involvement with the police in the sourcing of missing people.

Between 1965-67, Tanous taught theology at Manhattan College and at St John’s University, both in New York City.

Throughout the 1980s, Tanous taught classes on psychic phenomena under the heading ‘parapsychology’, focusing in particular on his particular interests of healing, dreams and survival. It was the first elective module of its kind to be taught with credit and is said to have attracted some thousands of students.

Tanous gave guided study group tours of Egypt and Israel for those interested in history and spiritual development. He guest lectured at St John’s University and other universities towards the end of the 1980s. He became a popular figure in Japan, where his talks on well-being and psychic phenomena were in great demand.

Tanous died in 1990 from a sudden heart attack following treatment for cancer. In March of that year he had founded the Alex Tanous Foundation for Scientific Research,21 with the aim of preserving his work and encouraging the continuation of his teachings through the offer of grants and scholarships. The foundation focuses on interests and topics to which Tanous devoted his working life:

Three months after his death, he published a third book entitled Dreams, Symbols and Psychic Power,22 relating to the classes on dream interpretation he taught as the University of Southern Maine.  In 2013, an unpublished manuscript entitled Conversations with Ghosts was finally edited and published with the assistance of Callum E Cooper.

Today, further archival research is being conducted, with unpublished writings by Tanous – concerning clinical parapsychology, healing, ufology, and the Bermuda Triangle – being edited and published as he intended.

Osis, K., & McCormick, D. (1980). Kinetic effects at the ostensible location of an out-of-body projection during perception testing.  Journal of the American Society for Psychical Research, 74, 319-329.