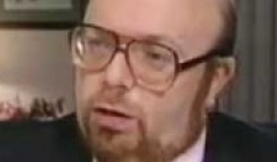 Charles Honorton (1946-92) was an American parapsychologist who achieved notable successes in his psi experiments in the 1970s and 1980s, and helped pioneer the ganzfeld sensory deprivation technique as a method of ESP testing. His work was cut short by his early death from a heart attack in 1992.

Charles Honorton became interested in consciousness and the paranormal as a small child. In his teens he corresponded with Joseph Banks Rhine, and spent his summer months at Rhine’s parapsychology laboratory at Duke University. He collaborated with Stanley Krippner and Montague Ullman in their dream telepathy experiments at the Maimonides Medical Center, becoming director of the Division of Parapsychology and Psychophysics there. He later pioneered the ganzfeld ESP experimental approach for which he is best known.

In 1979, Honorton founded the Psychophysical Research Laboratories (PRL) in Princeton, New Jersey. Following a successful series of automated ganzfeld studies he moved to the University of Edinburgh to pursue a PhD degree in 1991. While there, in November the following year he suffered a fatal heart attack.

Honorton’s earliest ganzfeld experiments were conducted at the Maimonides Medical Centre where Ullman and Krippner had been carrying out successful research on dream telepathy.1  The success of their work demonstrated the strong link between ESP and altered states of consciousness. Sleep laboratories are prohibitively expensive to run; Honorton was one of the first psi researchers to recognize how a similar state of disassociation might be cheaply generated in the laboratory for the purpose of eliciting ESP effects. He pioneered the use of the ganzfeld (total field), an approach adopted by German psychologists in the 1930s to investigate the hallucinatory effects of sensory deprivation. Typically, the subject’s eyes are covered with halved ping pong balls bathed in red light while headphones transmit white noise.  (See Ganzfeld)

In Honorton’s Maimonides experiments, the sender viewed a View-Master (stereoscopic toy) reel that had been randomly selected from a large number of reels, and attempted to mentally send to the receiver its visual and thematic elements. The receiver, located in an isolation room and having been put into the ganzfeld state, was asked to report all thoughts and images that came to mind. The experimenter, unaware of which target View-Master reel was being used, carefully monitored the receiver’s mentation via an intercom. At the end of the sending period, the receiver, having been returned to ordinary consciousness, was presented with four View-Master reels and attempted to identify which of them was the target based on his or her sensory impressions. The overall results provided clear evidence of ESP (p = 0.0005). Close matches were seen between targets and receiver mentation, often of an extremely striking quality.2

In later studies, experimental subjects performed while being filmed by different TV crews. The receivers correctly selected the target in six of seven sessions (p = 0.0013), suggesting that the pressured environments might have been psi-conducive. Honorton repeated the experiment with 17 visiting scientists and journalists contributing one session each, again with significant results (p = 0.025).4

Measuring Psi in the Ganzfeld

In 1975 Honorton proposed a more nuanced way of assessing psi ability in the ganzfeld. This involved coding each target picture as a unique combination of 10 binary numbers based on the presence (1) or absence (0)  of 10 possible content-categories (colour, activity, mythical characters, animals, human characters, artefacts, food, body parts, architecture, nature scenes) and coding the receiver’s mentation using the same scheme. A picture with colour, activity and natural scenes would be coded as ‘1000000011’. Honorton believed this method would be  better able to capture the full richness of a telepathy session than the simple hit or miss approach.  Since each session would involve ten independent guesses, with a chance expectation of five, a statistically measurable result could be obtained even within a single session. Statistical independence required 1024 possible picture targets to be selected and coded for, a challenge in the 1970s.

In an exploratory ganzfeld study involving binary code target material, the mentations of thirty sender-receiver pairs were coded and compared to the picture coding with significant results (p = 0.018).5

In parallel, Honorton and Smith undertook an investigation of the sender’s role in the ganzfeld. Twenty pairs of subjects contributed two sessions each. In one, the target was presented to the sender for ten minutes; in the other it was presented for 1 millisecond, sufficient for it to be registered only subliminally. The sender was asked to articulate mentations in the same way as the receiver. At the end of the session, both sender and receiver encoded their mentation using the 10-digit binary categorizations. Overall psi scoring was significant (p = 0 .015), a result that oddly matched the senders’ retrieval rate (p = 0.016).6  Also of interest was that the subliminal target accounted for most of the statistical significance. However, the approach did not increase effect sizes and being labour-intensive was abandoned.

In 1985, Honorton published a meta-analysis revealing a  highly significant overall effect.7  The finding was criticized by Ray Hyman, a psychologist and psi sceptic, who blamed poor methodology for the apparently impressive statistical results. Honorton and Hyman then published a joint statement agreeing on a new protocol that would eliminate the possibility of fraud and flaws. This led to the development of the automatic ganzfeld, or autoganzfeld, by Honorton and colleagues at the Psychophysical Research Laboratory (PRL) in which sequences and outcomes were entirely controlled by a computer. Eleven studies carried out in these methodologically tight conditions produced a highly significant hit rate of 34% (p = 0.001).

Honorton investigated ESP with Malcolm Bessent, the psychic subject of previous successful laboratory studies, comparing his clairvoyant and precognitive abilities. Bessent was presented with four distinct images, of which one was the target and the other three decoys. Two hypotheses were tested: that Bessent would demonstrate significant hitting in the precognitive target mode and that his precognitive performance would be superior to his performance on real-time targets. Both of these hypotheses were supported, with significant hitting in the precognition condition (p = 0.005) and scoring at chance in the clairvoyant condition. Bessent appeared able to distinguish between precognition and clairvoyance trials whose presentations were identical.8

A 1989 review of the precognition database (309 experiments) carried out by Honorton and Dianne Ferrari, found a highly significant result (10 x 10-9) that could not be attributed either to methodological or statistical flaws, including the file-drawer effect.9

In another meta-analysis, Honorton, Ferrari and Bem found highly significant evidence for a correlation between ESP and extraversion, in both forced-choice and free-response studies. A weakness in the forced-choice studies was that personality tests of subjects were conducted following the ESP testing, and so could have been influenced by good or bad psi performance, but this did not apply to the free response work.10

In an early study, Honorton tested a gifted subject, Felicia Parise, reporting that he’d observed her causing an object to move by psychokinesis.11 However, his main interest was micro-PK: he experimented with random number generators (RNG), building on  work by Helmut Schmidt in this area. A successful 1972 experiment12 was followed by a RNG study that demonstrated the influence of experimenter approach on outcomes.13  Thirty six participants were assigned either to an experimenter acting in a supportive or outgoing manner, or to one acting cold and aloof. Participants in the ‘positive interaction’ group scored significantly above chance while those in the ‘negative interaction’ group scored significantly below chance.

In other RNG work, Honorton and May14 tested six individuals who were experienced meditators together with four non-meditators acting as controls. They were asked to aim high and then to aim low. Five of the ten participants (four of them meditators) obtained significantly more hits in the high-aim than the low-aim condition (p = 0 .00006).

In a second study aimed at revealing a link between meditation and psychokinesis, Honorton examined RNG outputs for correlations with the brain activity of a meditation instructor when this was showing psi-conducive theta or alpha readings.15  The instructor was encouraged to relax, but not to attempt to influence the device. Overall deviation was significant (p = 0.058). When the instructor was given continuous feedback, a significant difference between high- and low-aim trials was obtained (p =  0 .0054), appearing to confirm that meditation is a state conductive to PK. In stark contrast, in a follow-up study with ten yoga practitioners16 significant results were obtained prior to meditation (p = 0.005) but not following meditation.

In yet another meditation-PK study, Honorton and Tremmell sampled the RNG while participants were engaged in an EEG-alpha biofeedback task, unaware of the machine’s presence (this study can be seen as the earliest version of the implicit field-PK work carried out by Roger Nelson and others, eventually leading to the Global Consciousness Project). RNG data were automatically sampled whenever the participant met pre-established alpha (8-13 Hz) brainwave criteria. In the first study involving ten participants, these sampled RNG samples revealed significant departures from expected levels of variance. In a second experiment, involving seven participants, Honorton and Tremmel once again found significant results in the alpha-EEG samples during the feedback periods, but chance results during non-alpha EEG sampled RNG periods.17

Honorton, C. (1987). Precognition and real-time ESP performance in a computer task with an exceptional subject. Journal of Parapsychology 51, 291-320.

Honorton, C., Drucker, S. A. & Hermon, H. (1973). Shifts in subjective state and ESP under conditions of partial sensory deprivation: A preliminary study. Journal of the American Society for Psychical Research 67, 191-196.

Honorton, C. & Schechter, E. I. (1985). Relationship between type and ESP performance in a perceptual isolation (ganzfeld) setting. Paper presented at the Sixth Biennial Conference of the Association for Psychological Type, Evanston, IL.