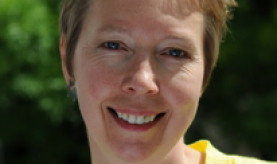 Caroline Watt is a Scottish psychologist and second holder of the Koestler Chair of Parapsychology at the University of Edinburgh. She has made contributions to understanding psi from both a proponent and sceptic angle, with an emphasis on improving methodological rigour.

Caroline Watt graduated with a Masters degree in psychology from the University of St Andrews in 1984. In 1986 she started work as a research assistant with the first Koestler Professor, Robert Morris, and was a founding member of the Koestler Parapsychology Unit (KPU), based in the University’s psychology department. She obtained a PhD in 1993 under Morris’s supervision.

Watt continued at the KPU until 2006 as a research fellow, then took up an appointment as senior lecturer in psychology at the University of Edinburgh. In 2010, she won the Perrott-Warrick Senior Researcher fellowship, and in 2016 was appointed Koestler Chair of Parapsychology, supervising postgraduate students and teaching, including an online parapsychology course.

Together with psychologist and psi-sceptic Richard Wiseman, Watt has focused attention on the need for improved reporting standards in the behavioural sciences. Although mainstream psychologists are only now beginning to address these issues, the European Journal of Parapsychology pioneered the option of journal-based pre-registration of experiments in 1978. To judge the impact on outcomes, Watt and Wiseman compared experimental findings for pre-registered versus non pre-registered studies, finding a clear decrease in the number of significant studies when authors adopted the former model.1 Elsewhere, Watt and Kennedy describe their creation2 of an online registry of psi studies at the Koestler Parapsychology Unit, which now has more than 50 pre-registered studies.3 Based on their experiences running the KPU Registry, Watt and Kennedy4 have advised psychologists how to improve study registration practices in psychology.

Just as study registration can be used to improve the conduct and reporting of individual studies, the same principle can be applied to the analysis of groups of studies. The statistical technique of meta-analysis as it is usually applied (retrospectively) has had only limited success in resolving debates about psi. Often debate centres on whether researcher bias has influenced the criteria for conducting the meta-analysis. Watt and Kennedy propose a registration-based prospective meta-analysis for psi research, in which the criteria for studies to be included in a meta-analysis are decided in advance of the study results being known. In order to prevent bias, studies must be registered before data collection begins (pre-registration). Such a meta-analysis would be of greater evidential value if it returned a positive outcome. Watt has recently started such an initiative with the ganzfeld telepathy protocol, whose first pre-registered experiment was statistically significant. 5

Watt and Wiseman reviewed studies that test the claim that learning magic tricks can offer therapeutic benefit and increase well-being in certain clinical populations. They found that most of the studies revealed beneficial outcomes, but most were of poor methodological quality, with small numbers of participants and a lack of control groups.  The review offers guidance on improving methodological quality.6

Watt and Wiseman tested the assertion by practitioners of Neuro-Linguistic Programming (NLP) that certain eye-movements are indicators of lying. The eye movements of lying subjects were recorded but these did not match those expected from NLP.  In a follow-up study the eye movements of both liars and truth-tellers in high profile press conferences were coded blindly by independent judges. No significant differences were found between liars and truth-tellers. Overall, the claims of NLP did not hold up to scrutiny.7

Watt and Easter investigated the role of expectancy effects in a distant healing experiment, testing whether healing outcomes were affected either by a person’s belief in healing or their knowledge of which group (healing or control) they were placed in or. Sixty participants were recruited from a rheumatology outpatient clinic and randomly allocated to either the control or healing group. Awareness of being a recipient of distant healing was found to be associated with an improvement in health, whereas participants unaware of what group they were allocated showed no improvement. Pre-existing belief in healing had no effect on outcomes. The dominant influence on health was knowledge of group allocation.8

Studies have shown that a remotely located person is able to influence, at a distance, the ability of a person to focus attention on a simple task.9 Watt and Ramakers carried out an extension experiment in which a ‘helpee’ focuses attention on a candle and presses a button whenever she feels distracted, while a ‘helper’ focuses attention at randomly determined intervals on improving the concentration of the helpee, resulting in fewer button presses. Nine believers in psi and five disbelievers were trained to conduct an experimental session and then conducted 36 psi trials each. Overall, there were fewer button presses compared to the control sessions (p = 0.04) indicating evidence for distant influence on attention. Additionally, there was a clear cut experimenter effect: psi believer experimenters were more successful than disbeliever experimenters at eliciting a distant influence effect from participants.10

In order to measure the impact of experimenter approach on distant influence effects, eighty participants were greeted by an experimenter who gave either psi-supportive or negative suggestions before a remote facilitation of attention focusing task. No overall remote facilitation of focusing effect was found, and there was also no measurable impact of psi positive or negative suggestions on psi performance. There was a statistically significant effect of suggestion on a variety of psychological factors but not on the psi task itself.12

Watt and Wiseman enlisted thousands of Twitter users to try to remote view a randomly chosen target being visited and ‘transmitted’ by an experimenter. The first half of the experiment involved non-blinded judging by the participants themselves, who unsurprisingly rated the known target as corresponding the most with their remote viewings; the greater their belief, the greater the rated correspondences. When blind judging was applied the results fell exactly at chance and the relationship between belief in remote viewing and psi scoring disappeared.13

Belief and expectation are important factors in psi outcomes. Watt arranged for 60 volunteers to take part in a study designed to explore the relationship between belief in luck and performance at two games of chance: the UK National Lottery and dice throwing. As predicted, belief in good luck correlated positively with expected success in lottery (p = 0.02) and dice throwing (p = 0.01). Participants who believed that they would be lucky at the lottery performed significantly better than those who didn’t (p = 0.013).14

What makes a good psi target?

The issue of optimal target selection is still not settled within the parapsychological community. To investigate this, Watt carried out forced-choice studies in which the targets were pictures, either emotionally reactive or neutral, that varied in complexity. Participants tried to use ESP to guess whether each target was emotional or neutral. Overall scoring across three studies revealed no difference between emotional and neutral pictures, but there was a non-significant trend towards greater psi identification of complex picture targets.15

Watt pursued a programme of dream precognition research with the support of the Perrott-Warrick Senior Researcher Fellowship. Dream ESP studies have become less successful since home testing replaced the use of sleep laboratory studies since the 1970s. Some have attributed this to the lack of EEG monitoring and recording of mentation. To test this view, Watt arranged for 20 participants, selected for prior precognitive dream experience, to sleep in a laboratory, and encouraged them to dream about a target picture that they would later view. An independent judge rated the dreams against the target and decoys. Watt found no evidence for dream precognition, suggesting that the hypothesis was unsupported. Further work aimed solely at understanding the psychological underpinnings of precognitive dreaming found no support for the assertion by sceptics that they are produced by implicit processing.16 However, evidence was found that selective recall and propensity to find correspondences between dream mentation and real-world events could act to exaggerate the frequency of perceived spontaneous precognitive dream experiences.17 Watt also found that the method by which spontaneous precognitive dream reports were collected could bias the reported characteristics. Retrospectively-reported precognitive dreams tended to be rated as more vivid and emotionally intense than prospectively recorded precognitive dreams18

Watt, C.A. & Morris, R.L. (1995). The relationships among performance on a prototype indicator of perceptual defence/vigilance, personality, and extrasensory perception. Personality and Individual Differences 19, 635-648.

Watt, C., Valášek, M., Cawthron, S. & Almanza, A. (2015). In the eye of the beholder: Uncovering the characteristics of prospectively reported spontaneous precognitive dreams. Journal of the Society for Psychical Research 79, 18-33.