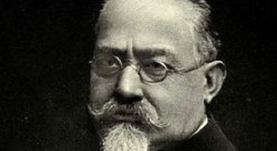 Cesare Lombroso (1835-1909) was an Italian criminologist, doctor and psychiatrist who devised a system of identifying criminality in individuals. He was an active and influential early researcher of claimed paranormal phenomena, notably with regard to the Italian medium Eusapia Palladino

Ezechia Marco Lombroso was born in Verona on 6 November 1835 into a wealthy Jewish family. He studied widely at several universities in Europe before completing a medical degree at the University of Pavia in 1858. In 1859 he worked as an army surgeon, which provided him with his first experiences of the clinically insane. This led him to develop physical measurements to predict criminality in soldiers.

During the following years he worked in an asylum in Pesaro and took up posts at the University of Turin as a professor of medicine and hygiene, psychiatry and finally, in 1906, criminal anthropology. It was in this field that he became firmly established, arguing that criminal behaviour was a throwback to an earlier evolutionary form of behaviour, was inheritable, and could be discovered in the shape of a person’s head.1 His most important book on this subject L’Uomo Delinquent was published in 1876 and was widely translated. Also notable was his book Genio e Follia, which proposed that genius is an evolutionarily form of insanity emanating from the same psychobiological root as other mental illnesses.2

Lombroso's experiments with hypnotism met with limited success but aroused his interest in abnormal mental phenomena.3  He joined the Society for Psychical Research (SPR) in the early 1890s and subsequently contributed articles to the Archivio di Psichiatria on mediumship, hauntings, telepathy, psychic photography, premonitions and other related subjects.4

In 1891, Lombroso joined a group of notable Italian academics investigating the mediumship of Eusapia Palladino, a Neapolitan medium reputed to produce powerful phenomena.5  He attended further sittings in the following year in Milan, at which Charles Richet was present, and again in Genoa in 1901-1902, and Turin in 1907. In his 1909 book After Death – What? he strongly endorsed the genuineness of Palladino’s phenomena and stressed the scientific nature of the investigations, pointing to the use of measuring instruments and the study of her physiology and mental health. Formerly a convinced atheist, he now accepted the spirit hypothesis as an explanation for some of her phenomena.6 Given his international reputation, his endorsement encouraged other scientists to take an interest in Palladino. 7

Lombroso also contributed to the literature of hauntings.8  One incident concerned a poltergeist-type case in a Turin tavern, where objects were being thrown apparently without cause.  Lombroso made a visit and witnessed wine bottles crashing to the floor and breaking of their own volition. He checked for evidence of fraudulent activity but found none. The departure of a thirteen-year-old employee eventually brought an end to the disturbances.9

A brief obituary in the British Medical Journal, republished by the SPR in its journal, credited Lombroso with having been a ‘pioneer in a new region of scientific thought’, and added, ‘though much of his work was fantastic and inaccurate, he gave a stimulus to other investigators, which will probably lead to fruitful results’.10

For lists of Lombroso’s works on criminology see here.

After Death - What? Spiritistic Phenomena and their Interpretation (1909). Boston: Small, Maynard & Co.

Alvarado, C. (1993). Gifted subjects’ contributions to psychical research: The case of Eusapia Palladino. Journal of the Society for Psychical Research 59, 269-92.

Lombroso, C. (1909a). After Death - What? Spiritistic Phenomena and their Interpretation. Boston: Small, Maynard & Co.