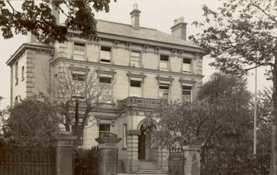 The Cheltenham Ghost was one of the earliest cases investigated by the Society for Psychical Research, concerning reports of a persistent apparition in a house in Cheltenham, a town in the west of England, occupied by the Despard family. (Scroll to the bottom of the page to read the original report)

Between 1882 and 1886, the figure of a tall woman dressed in black, habitually holding a handkerchief to her face was seen on a number of occasions by several people, who sometimes also claimed to hear her footsteps as she passed. The principal witness was Rosina Despard, then a nineteen-year old girl, resident in the house. At the request of the SPR’s Frederic Myers, Rosina subsequently provided a written report describing the frequent sightings of the figure by herself and other members of the household, whose own statements are also given.

The house, ‘Garden Reach’, was situated in Pitville Circus Road. It was built in 1860 and occupied by a couple named Swinhoe. When the wife died, he took to drinking, as did his second wife Imogen. This relationship was tumultuous: Imogen left him shortly before he died, in 1876, and herself died two years later.  The apparition was tentatively identified by Rosina as Imogen Swinhoe from a photograph.

After a second occupancy, the house was rented to Captain FW Despard, who moved in with his invalid wife and six children. It was left vacant for some time after the family’s departure in 1893, then being used as a school and a nunnery before being converted into flats.

In her account, Rosina Despard mentions having seen the apparition for the first time in June 1882, some three months after the family moved in, and a total of some six times over the following two years. She describes the first encounter as follows:

I had gone up to my room, but was not yet in bed, when I heard someone at the door, and went to it, thinking it might be my mother. On opening the door, I saw no one; but on going a few steps along the passage, I saw the figure of a tall lady, dressed in black, standing at the head of the stairs. After a few moments she descended the stairs, and I followed for a short distance, feeling curious what it could be. I had only a small piece of candle, and it suddenly burnt itself out; and being unable to see more, I went back to my room. The figure was that of a tall lady, dressed in black of a soft woollen material, judging from the slight sound in moving. The face was hidden in a handkerchief held in the right hand. This is all I noticed then; but on further occasions, when I was able to observe her more closely, I saw the upper part of the left side of the forehead, and a little of the hair above. Her left hand was nearly hidden by her sleeve and a fold of her dress. As she held it down a portion of a widow's cuff was visible on both wrists, so that the whole impression was that of a lady in widow's weeds. There was no cap on the head but a general effect of blackness suggests a bonnet, with long veil or a hood.’ 1

She spoke to the figure on 29 January 1884 and received recognition but no vocal response – just a ‘slight gasp’. On a subsequent occasion she thought that the figure wanted to reply to her, but found itself unable to. The figure did not displace light threads she placed across its habitual path; nor was she able to touch it. On one occasion she cornered it, but it vanished.  Deliberate attempts to watch out for the figure never succeeded.  Her attempts to photograph it failed because of the need for long exposures in poor light.

In July and August 1884, the figure was seen with increasing frequency, and by a number of witnesses. Sightings became less frequent in 1887 and faded altogether by 1889, after which none had been recorded by the time the Despards left in 1892.

On behalf of the Society for Psychical Research, Frederic Myers visited the household at intervals from 1886. He was impressed with Rosina’s testimony and with the corroborating statements by other witnesses, considering the case to be one of the ‘most remarkable and best authenticated instances of ‘haunting’ on record’2 He described Rosina as ‘a lady of scientific training, now preparing to be a physician,3 and judged her family to be ‘unusually free from superstitious fears’.

Over the years, the case has attracted considerable comment from investigators of haunting phenomena.4   GNM Tyrrell, author of a much-quoted analysis of such phenomena (Apparitions, 1943), viewed the Cheltenham apparition as a ‘brooding reminiscence’ playing out actions from the time when she was alive.5 The sounds of footsteps, he suggested, might involve poltergeist activity originated by living persons. Psychologist Alan Gauld called it the ‘most famous ghost of all’ and ‘without doubt the most curious case of its kind ever printed’.6 Andrew Mackenzie described evidence that the haunting, far from fading after a few years, continued for another century. In a thorough review in 2011 Bryan Williams of the Psychical Research Foundation, emphasised the multi-faceted nature of the case, combining collective apparitional experience; possible place memory; ESP on the part of the observers; and immateriality combined with a solid appearance.7

To protect the Despards' privacy the report refers to them by the name 'Morton', for which reason the episode is often referred to in the literature as the ‘Morton Case’.