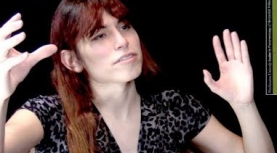 Dani Caputi is an American atomospheric science researcher who has investigated consciousness-related effects in micro-meteorological processes.

Dani Caputi received a PhD in atmospheric science in 2019 at the University of California, and is a co-founder of PEACE Inc. In her doctoral program she has combined a deep interest in parapsychology with her atmospheric research by investigating consciousness-related effects in micro-meteorological processes. Recently, Caputi has expanded these consciousness studies to include effects of mass attention on random number generator behaviour associated with festivals and online music streaming. Caputi cultivates philosophical discourse on consciousness, which she views as a unifying factor between these lines of research.

Caputi has presented a model1 describing three essential problems of phenomenal consciousness: alleged psi abilities, the hard problem, and the selection problem, and speculating that the nature of randomness might be critical. To further probe these conjectures, Caputi ran two experiments. In the first, participants attempted to influence turbulent wind fluctuations measured by a sonic anemometer in Davis, CA. In the second, a random event generator (TrueRNG) was placed on an aircraft. Analysis of the data found that the TrueRNG output was significantly more ordered when flying through regions of convective turbulence (p = 0.0002). The data from the weather influence research was inconclusive. Caputi concluded that, overall, these data suggest a deep connection between quantum randomness, turbulence and consciousness.

The second type of mind-matter interaction research involves probing for mass consciousness effects. In this experiment2  Caputi, along with Leo Madrid and Nathan Bietz from PEACE Inc, arranged for two large mirrored light emitting diode (LED) panels controlled by a random number generator based on electron-tunnelling to be the focal point of the Apparitions 2019 music festival in Rosarito, Mexico. The panels consisted of 18 independent light nodes programmed to change colour according to the RNG input every 3.8 seconds. It was hypothesized that the degree of colour synchronicity between the lights – technically termed autocorrelation – would be associated with both the number of festival goers and/or times at which headliner DJs were performing. This is because the degree of autocorrelation is dictated by the output of the true RNG and is potentially amenable to collective conscious influence.

Analysis of the data revealed a significant relationship with audience size (p = 0.013). Additionally, the maximum autocorrelation observed within a 15-minute sliding window were positively correlated with crowd size (p = 0.011). The effect size of 0.06 exceeded about 90% of other intention-based RNG studies. Caputi concludes that the results of this study suggests a promising research method for obtaining reliable and consistent mind-matter interaction effects, allowing longstanding questions about the role of consciousness in the physical world to be resolved through future data collection with light-immersive crowd feedback.

A third line of mind-matter interaction research investigates music as a vehicle for micro-PK expression. In this research, melodic tones are generated by a random number generator and a shift in key is caused when the RNG displays a degree of coherence (behaves less randomly). Under purely normal circumstances such shifts in modulations, as Caputi terms them, would be expected once every four minutes, but if consciousness is able to affect RNG operation this frequency would be expected to increase. In preliminary testing over the internet the effect is small but significant (p = 0.05).3

Caputi states that all of her parapsychological research has been conducted with the goal of increasing effect sizes and consistency of mind-matter interactions. In the atmospheric domain, she theorizes that turbulence can amplify initially small mental perturbations in the air that can eventually create large disturbances that are often reported in Shamanic literature (such as rain dances having the desired effect). From work at PEACE Inc that includes light and music-augmented RNG feedback, she theorizes that such immersive feedback will also drive up effect sizes. Larger effect sizes, she states, will allow differing physical theories of psi (such as Decision Augmentation Theory) to be tested more rigorously. She also proposes that a panpsychist framework may glue together the three problems of phenomenal consciousness (above).