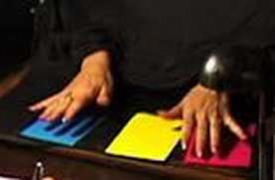 The phenomenon commonly known as dermo-optical perception (DOP) refers to the apparent ability to discern the colour of a stimulus object purely on the basis of touch, that is, without any visual access to the object. To the extent that one cannot literally ‘see’ with the fingertips the term perhaps is inapt. In part for this reason, the phenomenon also has variously been dubbed aphotic digital colour sensing, nonvisual colour perception, paroptic vision, cutaneous perception of colour, and eyeless sight;1 however, for convenience the popular term DOP will be used here.

This entry is a slightly revised version of a section of a paper by Irwin in the Australian Journal of Parapsychology and is reproduced here with the permission of the editor.2

Cases of apparent DOP have long been reported; for example, a case in the seventeenth century was described by the scientist Robert Boyle and by the novelist Jonathan Swift.3  Indeed, in the mid-1960s Liddle noted that over fifty cases had been recorded in some 140 years and eight different countries4. Apart from the pioneering work of Jules Romains5 the modern experimental study of DOP appears to date from the early 1960s.6 A Russian woman, Rosa Kuleshova, was reported by a neuropathologist Dr Goldberg to be able to discern colours simply by ‘feeling’ them, and eventually she was tested formally by researchers in the Laboratory of Psychology at the Nizhny Tagil Pedagogical [teachers’ training] Institute7 and later at the Biophysics Institute of the Soviet Academy in Moscow.8

Accounts of these observations were reported in the popular press in the West, and soon many people came forward to assert that they, too, had the ability of DOP. Some of these claimants proved to be frauds and some subsequently confessed to fraudulent activity.9 Thus, there were some grounds for the assertion by the inveterate debunker Martin Gardner that ‘successful’ DOP performance could be attributed wholly to the experimenter’s use of poorly fitting blindfolds and a ‘peek down the nose’ by participants.10 The generality of Gardner’s account nevertheless was vigorously challenged11 although sceptical commentators still cite Gardner’s explanation as definitive.12

Since the mid-1960s a number of people have been tested for DOP under increasingly rigorous experimental conditions. For example, participants have been screened from the coloured objects, allowed to touch them only through elasticised sleeves, and have had their head enclosed in a box. Notwithstanding some null findings,13 some participants have shown accurate tactile identification of colours well beyond that expected by chance.14 On these grounds practical applications of DOP for blind people have even been mooted15 but to date these proposals have not progressed substantially. 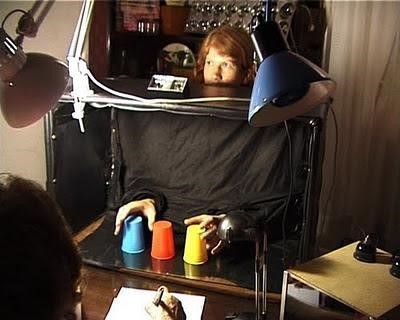 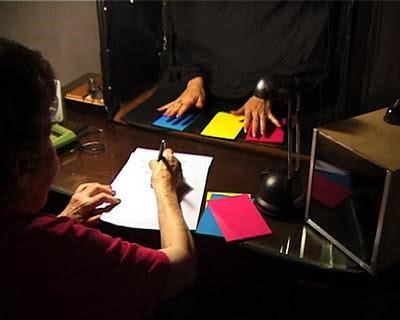 Although a growing number of psychologists now concede there is a phenomenon here to be explained,16 there remains a lack of consensus on the actual nature of DOP. Successful DOP performance has been observed even when participants are kept in complete darkness,17 so it would seem the effect is not mediated by radiation within the normal visible spectrum.18 Some commentators19 have noted, however, that coloured objects may vary in their infra-red emissions and thus it is possible people may learn to use thermal sensors in the fingers to distinguish different colours by touch; indeed, some experimental evidence has been educed in support of this viewpoint.20

A popular alternative view, according to Berger and Berger21 is that the phenomenon has an extrasensory basis. The Bergers add, however, that an experiment by Nash22 appears to rule out an extrasensory account. In Nash’s study, DOP performance was significant when participants could touch the coloured stimulus card but not when the card was covered with a thick sheet of glass. Nash held that if esp was involved, performance would have been significant also in the plate-glass condition. This rejection of the extrasensory account nevertheless relies on a null result for its substantiation. Indeed, Nash’s findings may be accommodated under an appeal to some anomalous characteristic of experimental extrasensory perception (ESP) such as the parapsychological experimenter effect or the differential effect.23 Thus, the evidence against an extrasensory theory of the phenomenon is perhaps equivocal. In addition, DOP has also been found even when the target objects are enclosed in a cardboard or aluminium-foil envelope and the participants can only lay their hand above the envelope;24 for all practical purposes cardboard and aluminium would normally prevent the passage of infra-red radiation.25

There are some grounds, therefore, for proposing that DOP is a paranormal phenomenon akin to ESP, and it may well be the case that the procedure of DOP tests is essentially psi-conducive, albeit to an exceptionally potent degree, it would seem.

Irwin, H.J. (2015). Thinking style and the formation of paranormal belief and disbelief. Australian Journal of Parapsychology 15, 121-39.

Larner, A.J. (2006). A possible account of synaesthesia dating from the seventeenth century. Journal of the History of the Neurosciences 15, 245-49.