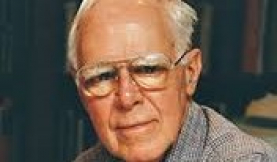 Martin Gardner (1914–2010) was a American writer and critic of paranormal claims. His targets included parapsychology, alternative health treatments, religion-based pseudoscience and cult movements. He co-founded the Committee for Scientific Investigation of Claims for the Paranormal (now the Committee for Skeptical Inquiry) and is considered a leading figure of the modern sceptical movement.

Martin Gardner was born 21 October in Tulsa, Oklahoma, USA. His father, James Henry Gardner, a geologist and independent oil producer, taught him basic science and set up a small laboratory for him.1 He became interested in magic in elementary school.

Gardner’s main interests in high school were mathematics and physics. He planned to earn a physics degree at the California Institute of Technology, but entrance required two years at a liberal arts college, so instead he studied philosophy at the University of Chicago, earning a baccalaureate. During the end of the Depression period he worked as a social caseworker for the Chicago Relief Administration, then studied on a scholarship at the Chicago Theological Seminary.

Gardner decided to become a writer and worked briefly as a reporter in Tulsa. He then returned to the University of Chicago to work in its press relations office, mostly writing science research press releases. He also edited Comment, the university’s literary magazine, and was part of the Chicago magicians’ community. During World War II he served in the Navy for four years, mostly in writing and public relations jobs; after his service he began selling short stories, then moved to New York City and worked for eight years for a children’s magazine. In 1956 he published an article in Scientific American; this led to a regular column entitled Mathematical Games, which he wrote for 25 years.

Gardner authored many books, most of them on popular mathematics, puzzles, games and brain teasers (a full bibliography may be found here) as well as columns, articles and reviews in popular publications. He never performed magic publicly, but invented tricks and wrote extensively on the topic. He continued writing until his death at the age of 95.

Gardner’s mother was a devout Methodist; he viewed his father, nominally a Christian, as a pantheist. In his teens he was attracted to atheism by Thomas Paine’s Age of Reason, but in his final high school year he embraced what he calls ‘a crude form of Protestant fundamentalism’,2 attending the First Presbyterian Church in Tulsa. He had a short flirtation with Seventh-Day Adventism after a book by Adventist geologist George McReady Price convinced him the world was 10,000 years old and another book convinced him that the Second Coming was imminent. He again lost his faith after reading an exposé on the massive plagiarism committed by a co-founder of the sect in writing its scripture. In university, he decided he could not call himself a Christian when he did not believe that Jesus was God incarnate or that the miracles described in the Bible were possible.

Gardner eventually settled on philosophical theism. ‘I managed to retain faith in a personal God and a hope for an afterlife’,3 he wrote, but added that he was certain that there were no proofs for either and that his beliefs in them were emotionally based. He considered that the puzzle of how the brain produces consciousness is ultimately insoluble.

Gardner first came across articles criticizing pseudoscience in Hugo Gernsback’s magazine Science and Invention. His first article on the topic, ‘The Hermit Scientist’, was published in the Antioch Review in 1950, and tackled Scientology, UFOs, George McCready Price’s creationist geology, Wilhelm Reich’s orgone therapy and others.4

Upon reading ‘The Hermit Scientist’, a high-school friend and literary agent suggested Gardner expand it into a book. In the Name of Science was published by Putnam in 1952. It attracted little notice until it was republished by Dover in 1957 with the title Fads and Fallacies in the Name of Science, when it became one of the company’s top sellers. The book attacked UFOs, dowsing, Atlantis, Lemuria, naturopathy, chiropractic, Edgar Cayce and other unconventional healers, vegetarianism, organic farming, anthrosophy, psychodrama, palmistry, graphology, JB Rhine, Upton Sinclair, unconventional sexual theories, the Bridey Murphy reincarnation case, and many other topics.

In 1975, Gardner wrote a short satirical book under the pseudonym ‘Uriah Fuller’ entitled Confessions of a Psychic, poking fun at the celebrity psychic Uri Geller. In 1976, he co-founded the Committee for the Scientific Investigation of Claims of the Paranormal (now the Committee for Skeptical Inquiry, CSI) with Paul Kurtz, James Randi and Marcello Truzzi.5

In 1983, Gardner started writing a regular column for CSICOP’s magazine, the Skeptical Inquirer, entitled ‘Notes of a Psi-Watcher’ and later retitled ‘Notes of a Fringe-Watcher’, continuing to contribute until 2002. These columns, alongside similar essays and reviews written for other publications such as the New York Times, New York Review of Books and Discover, were collected into a series of books, several of them published by Prometheus Books. He also edited The Wreck of the Titanic Foretold? (1986), a collection of writings that apparently portend the ship’s sinking, accompanied by critical notes.

Gardner wrote one paper for the Journal of the Society for Psychical Research, responding to Swiss psychic Silvio Meyer’s claim to have created a permanent paranormal object (PPO) by passing a foil frame into the centre of a sheet of paper by a slit which he then ‘healed’. Gardner gave instructions for constructing an object with the same property by making the paper from a mixture of paper fibres and water.6

How Not to Test a Psychic: Ten Years of Remarkable Experiments with Pavel Stepanek (1989). Amherst, New York, USA: Prometheus.

On the Wild Side: The Big Bang, ESP, the Beast 666, Levitation, Rainmaking, Trance-Channeling, Seances and Ghosts, and More (1992). Amherst, New York, USA: Prometheus.

Did Adam and Eve Have Navels? Discourses on Reflexology, Numerology, Urine Therapy, and Other Dubious Subjects (2000). New York: Norton.

Gardner is regarded by psi-sceptics as a founder of the modern sceptical movement, some tracing its origins to his 1952 book Fads and Fallacies In the Name of Science. Michael Shermer credits his writings with pushing the sceptical movement to the forefront of public consciousness.7 Biologist and author Stephen Jay Gould called him ‘the single brightest beacon defending rationality and good science against the mysticism and anti-intellectualism that surrounds us.8

Gardner is considered one of ‘ten outstanding skeptics’ in an article in Skeptical Inquirer, in a list which also includes Harry Houdini, Bertrand Russell and Albert Einstein. He is one of 27 scientists, scholars, writers and investigators honoured in 2011 in the CSI’s Pantheon of Skeptics.

Gardner’s attacks on parapsychology have been characterized by practitioners as ‘laden with insults, innuendos and emotionally-toned phrases’.9 JL Randall writes: ‘I should feel much more confidence in Gardner's criticisms if he would (a) confine himself to a properly objective scientific analysis of the experiments, and (b) submit his conclusions for publication in the scientific literature, rather than propagandist periodicals such as The Humanist.’10 Nancy Zingrone writes that most of his work ‘contains statements in which the parapsychological community is battered rhetorically by a brandishment of idealized scientific norms and misconceptions of scientific practice in prose that fairly drips with moral indignation.’11

Gardner is criticized for deliberately confusing serious and popular parapsychology as a means of discrediting the former. ‘Gardner draws comparisons, for example, between the psychic DD Home and the illusionist Uri Geller; between Geller’s naïve investigators and Jule Eisenbud; between Peter Phillips … and Robert Morris; between William Crookes and Arthur Conan Doyle.’12

In a review of Gardner’s book-length critique of psychic Pavel Stepanek, John Beloff pointed out that for an individual to submit to scientific scrutiny over many years with the intention merely of duping investigators would amount to psychopathic behaviour, yet he exhibited no independent evidence of this. Beloff added:

It seems the author simply cannot restrain himself from lashing out recklessly at various paranormal claims which he regards as having been exploded but which in fact are still wide open to discussion … even before Gardner entered the fray, the data from this case was no longer necessary to establish the case for ESP. One can only suppose, therefore, that the reason why Gardner went to all the trouble of writing this book was not so much to demolish Stepanek as to discredit parapsychologists.13

In another review of the same book, parapsychologist Jürgen Keil writes, ‘The whole purpose of his book is to misrepresent a period of careful research’.14 Keil makes a strong supporting case for Stepanek, in the course of which he exposes factual errors by Gardner.

Milan Ryzl, the main experimenter with Stepanek, revealed that Gardner had written to Stepanek suggesting that Stepanek ‘write an article or give an interview in which he would reveal how he cheated’. Gardner offered to help publicize such a report and, further, to produce a documentary film ‘that would make him at once internationally famous and at the same time enable him to receive substantial honoraria’.15

In a paper on the role of magicians in parapsychological research,16 WE Cox reports a discussion with Gardner about Uri Geller’s psychokinetic effect on his keys and watch.

My replies re the watch yielded only presumptuous reactions. His ‘proposed non-psi hypothesis’ was patently simplistic … This watch was both double-backed and sealed. Not a single conceivable normal cause has been cited (Gardner’s does not qualify, being ad hominem) in the decade since it occurred.17

George P Hansen observed that, where psi research was concerned, Gardner attacked individuals who claimed to possess psychic gifts rather than the ordinary people who were the subjects in most psi testing. Hansen further pointed out that Gardner lacked an advanced degree and was not trained in experimental science and noted that since his writings were mostly published in books and magazines rather than peer-reviewed academic journals, they contained significant statistical errors.

Exploring Gardner’s motives, Hansen cites the essay ‘Science: Why I Am Not a Paranormalist’18 in which Gardner admits to fear of telepathy and clairvoyance as a danger to personal privacy, and of psychokinesis as carrying the threat of harm. Hansen sees a religious motive also, suggesting that Gardner’s objection to parapsychological research relates to a wish to maintain a border between science and the divine, which he consisdered should not be tested, being a matter of faith: in his eyes, parapsychologists are committing a sin.19

For further criticisms by Gardner and rebuttals by others, see:

Beloff, J. (1990). Review of Gardner, Martin, How Not to Test a Psychic: Ten Years of Remarkable Experiments with Pavel Stepanek. Journal of the Society for Psychical Research 56, 171-5.

Keil, J. (1990). How a skeptic misrepresents the research with Stepanek: A review of Martin Gardner’s How Not To Test A Psychic. Journal of Parapsychology 54, 151-67.

Shermer, M. (1997). A Skeptical Manifesto. In Why People Believe Weird Things: Pseudoscience, Superstition, and Other Confusions of Our Time. USA: W.H. Freeman.