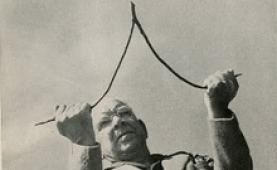 Henry Gross (1895–1979) was an American game warden and dowser who used his ability to locate water for landowners. Anecdotal claims regarding Gross were publicized by writer Kenneth Roberts in three books which reached a wide public but also aroused controversy. Tests for psychic ability carried out by parapsychologists proved mostly negative. His most notable achievement was said to be the location of freshwater sources on the island of Bermuda, contradicting a prevailing belief that fresh groundwater was impossible to find there.

Details of Henry Gross’s early life and dowsing activity are given by journalist and historical novelist Kenneth Roberts in three books.1 Gross was born in Lawrence, Massachusetts, USA; his family moved to North Salem, New Hampshire, when he was three. At the age of twelve, he befriended an elderly stonemason, John Dustin, and observed him dowsing, using a Y-shaped stick that he had cut from a tree. He asked to try and found that the stick turned in his hands forcefully over a spot beneath which water lay.

When his school needed a well, he asked permission to try to locate a suitable source and was proved successful when the spot he indicated was dug. Aged eighteen, he performed a similar feat for a neighbour. Word of his ability spread, and he began dowsing in his spare time while working as a game warden.

Kenneth Roberts was one such neighbour, owning a farm in Kennebunkport, Maine. He asked Gross in 1947 to help him determine where to dig a well to provide water for fighting the forest fires which had proliferated in the region as a result of a drought. Using a maple twig, Gross identified a location that proved to be a good source. Impressed, Roberts encouraged Gross to experiment in order to develop his ability further. Gross did so and discovered that he could dowse for a specific substance by first touching it with the tip of the rod, suggesting that the rod detected some sort of wave energy emanating from it. He also believed he could divine the answers to questions by observing the movement of the rod as each question was asked.

By 1949, Gross claimed he could now tell how far a vein of water was from where he was standing and how deep in the ground, how much flowed and in which direction, and whether it was potable. He also claimed to be able to dowse remotely, requiring only the location and name of the landowner. His reputation grew to such an extent that the local Soil Conservation Service recommended to landowners that they should consult him before attempting to dig a well.2

In the winter of 1949–50, Gross successfully indicated several sources for new wells in Bermuda, a particularly challenging environment (see below). He claimed to have identified water sources in distant locales by map-dowsing, including Nassau in the Bahamas, the island of Capri and the Sahara Desert, but few of these were verified by digging.

Gross continued to dowse in the northeastern United States during his retirement, due to overwhelming demand. Political journalist Sam Smith recalls, during his teens, a visit to his household by Gross, who was accompanied by Roberts and another of their neighbours, the actress Bette Davis: ‘Whether by chance or by skill, Gross found a number of well sites that we would use for decades.’3

To supplement Gross’s income and protect him from being taken advantage of, Roberts set up a corporation for him named Water Unlimited.

Familiar with the Caribbean island of Bermuda from frequently writing his novels there, Roberts was aware that the island was thought to have no fresh groundwater for drinking, only brackish water; the only sources were rainwater, gathered mainly from the roofs of buildings, and bottled imports. Roberts confirmed this notion and its official status in publications by geologist Addison E Berrill and Bermuda’s director of public works, Walter Brownell Hayward. Roberts had heard of one well that had been dug in 1849, but was now dry.

After learning all this from Roberts, Gross spontaneously carried out a remote ‘map dowse’, from which he concluded that good drinking water was available in three locations on the island, with a fourth source polluted. He sketched them on a map and provided instructions for finding them.

When severe drought in the winter of 1949–50 imperilled Bermuda’s water supply, Roberts decided to act on Gross’s information, appealing to two well-connected friends, Sir Stanley Spurling and Sir Howard Trott, to procure workmen and equipment. Gross was flown to the island on 5 December 1949, and exploratory dowsing identified locations that matched those on his earlier map, although characteristics such as depth and flow differed.

Despite a front-page report in a local newspaper generating controversy and delays in finding labour, equipment and power sources for drilling, the four men persisted in having four wells dug. Three did indeed produce potable water and one brackish. One of the freshwater wells provided 44 gallons per minute for a period of 72 hours, attracting locals with containers and water-trucks, and generating more front-page newspaper articles.

Two of the wells resulting from Gross’s work proved long-lasting. Mark Rowe, then head hydrogeologist for Bermuda Water Works, is quoted in a 2004 article as saying that of the three freshwater wells, two were still ‘very productive’ while the water in the other had gone brackish. The article notes that of some 3,000 private wells in Bermuda, it is legal to drink the water from only these two.4

Gross participated in tests of psychic ability supervised by parapsychologist Gardner Murphy and others on behalf of Life magazine. He was asked to try to discern between hidden jars containing sand or water and envelopes that were either empty or contained a 25-cent coin. He did not succeed, and the study was not published.

Gross was one of two dowsers studied by parapsychologist JB Rhine.5 Water was run intermittently through two pipes on Roberts’ property and the dowsers were challenged to ascertain when it was present. According to Rhine, Gross was confident he could do this. The results for both were significantly below chance in purely-random runs, and somewhat higher than chance in runs where the state (water or no water) was held the same for multiple consecutive times.

In both sets of runs, both dowsers displayed the typical decline effect found in psychic experiments, scoring higher towards the start and lower toward the end of the run. Rhine notes that neither dowser was given feedback about their successes, a practice in psi research that was later decried by parapsychologist Charles Tart as likely to extinguish positive outcomes in repetitive experiments.6

Rhine noted that misses well below chance require a connection between subject and object no less than hits well above chance, while also ruling out normal means of knowledge, as the subject would presumably use them to score above chance. Noting the abundant indications that psi abilities are easily inhibited, he speculated that the dowsers may have been unconsciously opposed to testing or had been discomforted by an unfamiliar and artificial challenge.

Rhine recommended further research using a combination of field observation and controlled experiments, but this was not carried out.

In the early 1960s, psychiatrist BE Schwarz tested Gross with electroencephalography while he dowsed for water outside the laboratory and for hidden objects in the laboratory. Schwarz noted no measurable changes other than increased eye movement and muscle artifact. Using polygraph-style testing he found that Gross’s heart rate and blood pressure increased while his respiration became irregular, consistent with a significant expenditure of energy. Anecdotally, Schwarz recorded notable dowsing successes during this testing.7

In a study conducted by electrical engineers, Gross’s skin potential was measured. The results during map-dowsing were inconclusive, but when Gross walked over a vein of water a change of one hundred millivolts was noted, compared with a change of less than ten millivolts when non-dowsers did likewise.8

Roberts was ridiculed for his claims regarding Gross in newspapers, magazines, books and even by his own friends. He was said to believe that Gross had ‘rhabdomantic powers which, if only recognized and utilized, would flood the earth with life-giving waters and cause the deserts to blossom like the rose’.9  One Thomas Riddick opined that his ‘illogical and unscientific conjecture may do real harm’.10

An attempt by Gross to locate water sources in Tikal, Guatemala, in 1957 appears to have failed, according to authors EZ Vogt and Ray Hyman: Gross had predicted water would be found at 499½ feet, but none was found even at 520 feet.11

Sceptical author Martin Gardner questioned Gross’s ability at length in a chapter on dowsing in Fads and Fallacies in the Name of Science.12 He accepted that Gross was neither a charlatan or hoaxer: ‘He seems simple and sincere, completely baffled by his peculiar ability but at the same time intensely interested’. On the other hand, Gardner continued, ‘there is everything to suggest that Gross, without conscious awareness, is transmitting his thoughts to the dowsing rod or pendulum by unconscious muscular movements’. Apparent successes could be explained by Gross having learned from his work as a game warden to identify clues about the presence of water from environmental indications, Gardner wrote. He further claimed that successes could seem more remarkable than they really were as ‘water fairly close to the surface is far more plentiful than one might think, and the odds of finding it at shallow depth, at a spot picked at random, are in many regions very high.’13

Against the claim of subconscious muscular action, initially put forward by JB Rhine, Roberts claimed that not only were no movements discerned in Gross’s arms or hands when the rod dipped, but that he had ‘brought a rod to life’ in Roberts’s own hand, holding one arm of the Y-shaped rod while Roberts held the other. This phenomenon also apparently happened with family members of Horace Levinson, a scientist and friend of Roberts.

He appeared on the game show To Tell the Truth on 22 October 1961. The episode can be seen here and his appearance begins at 15:04. It includes a dowsing demonstration with Gross holding one arm of the rod and a member of the panel grasping it tightly in an unsuccessful attempt to keep it still, starting at 21:36.

Kenneth Roberts’s papers, including many concerning dowsing and Henry Gross, may be found in a collection held by Dartmouth University.14 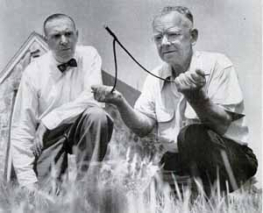