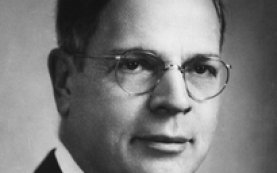 Murphy believed that the findings of parapsychologists had much to teach about psychology, and vice versa, and that researchers in each field should pay attention to the other.

Gardner Murphy was born on July 8, 1895 in Chillicothe, Ohio, USA. His father was an Episcopalian minister, his mother a graduate of Vassar University. He spent much of his boyhood in New England.1

Murphy credited his maternal grandfather and his parents with having opened his mind to parapsychology; they felt there was ‘something in it’ and had read the literature. Aged sixteen, he read William Barrett’s 1911 book Psychical Research, which he found in his grandfather’s library.2

Murphy then entered military service with the American Expeditionary Forces in 1917, and served in France as a member of the Yale Medical Corps until July 1919.  He read extensively on parapsychology, encouraged by leaders at the Society for Psychical Research (SPR) in London and at the American Society for Psychical Research (ASPR).3 He particularly admired the works of SPR pioneers FWH Myers and Eleanor Sidgwick4 and was also inspired by the work of the American philosopher and parapsychologist William James.

In 1921, Murphy resumed graduate work at Columbia University while working as a psychology lecturer, and was awarded his doctorate in 1923.  From 1922 to 1925, he served as the Hodgson Fellow in Psychology at Harvard, working with LT Troland at research on telepathy and survival, for which he took part in sittings with the Boston medium Leonora Piper.5

While supervising masters and doctoral candidates at Columbia, Murphy began writing the books that would cement his reputation as a prominent voice in psychology, notably in personality, social and cognitive psychology. Several of his books have been used as textbooks throughout the United States.

Murphy returned to parapsychology in 1934 after a long illness, visiting Dr JB Rhine at the Parapsychology Laboratory at Duke University and meeting many of Rhine’s associates.

In 1940, Murphy moved from Columbia to the City College of New York to head its psychology department, also conducting research on the role of emotion and feeling in perception and memory.  In 1941, he began collaborating with Laura Dale of the American Society for Psychical Research, and the following year taught a summer course on psychical research at Harvard. One student was Dr Gertrude R Schmeidler, who was inspired to embark on a research career in parapsychology, which included collaborative work with Murphy.6

In 1950, Murphy and his wife Lois (née  Barclay), also a psychologist, travelled to India to work as United Nations Educational, Scientific and Cultural Organization (UNESCO) consultants to the Indian Ministry of Education.

In 1952, Murphy left the City College to become director of research at the Menninger Foundation in Topeka, Kansas.  Upon retiring from this position in 1968, he moved to Washington DC, and taught psychology at George Washington University as a visiting professor until 1973.

Murphy was awarded the Butler Medal by Columbia University 1932, and the Gold Medal of the American Psychological Association (APA) in 1972. He received honorary doctorates from the University of the City of New York in 1975 and the University of Hamburg in 1976.

After a protracted illness, Gardner Murphy died of cardiac arrest on March 18, 1979 in Washington, D.C., aged 83.

Murphy was praised a vastly knowledgeable scientist and also as a kind and considerate man, loved by those who knew him.  Parapsychologist Charles Tart wrote: ‘In our wide-ranging discussions, I was constantly amazed at the breadth and depth of Gardner’s knowledge… he could grapple in detail with the nuts-and-bolts details of problems, right in there with technical specialists, and then step back and relate the problems to a wider perspective…’9  The quality and nature of his teaching was celebrated by former student Eugene Hartley in a book of essays commemorating Murphy’s thought and interests. Murphy was consistently voted ‘best-liked teacher’ by seniors at the City College, Hartley writes, in part because: ‘[his] respect for human integrity and worth is revealed in all his dealings with his students… students are people and people are accorded an unfailing courtesy’.10

In his memory, the ASPR established the Annual Gardner Murphy Memorial Lecture Series, choosing a deserving scientist to receive an award and present his or her work each year.11  The Gardner Murphy Research Institute in Washington DC was also named in his honour.

In addition to his early investigations of mediumship and experiments with telepathy, Murphy tested such questions as the impact of ESP experimental subjects’ belief in their own abilities on their scores.12  He followed every development in parapsychology, as is evidenced by his many books and papers describing the state of the field; he also wrote about its history.13

Murphy laid out parameters for parapsychological science in an entry for the Encyclopedia of Psychology in 1946 that remains relevant today:

The most prominent concern of psychical research today may be said to be (a) the study of those psychological and physiological conditions under which paranormal phenomena, spontaneous or experimental, appear; (b) the devising of special experiments which will give maximum opportunity for these special conditions to manifest themselves; (c) the resulting development of a consistent repeatable technique; (d) the discovery by all these means of the laws or principles underlying the phenomena; (e) the eventual construction of a system of knowledge which will bind these principles together, so that all of the various types of paranormal phenomena will make a meaningful whole, internally coherent and in meaningful and intelligible contact with the general laws of psychology.14

Murphy saw psychology and parapsychology as sister fields, and maintained that each has received – and should continue to receive –  major contributions from the other.  For instance, in a presidential address to the SPR given on June 8, 1949,15 he explores the questions of

He gives advice for productive collaboration between the two fields:

I would suggest the experiment of looking upon personality as the same subject matter whether it happens to be studied by psychologists or by psychical researchers; that we regard the paranormal as emerging from lawful and ultimately intelligible factors operative within normal personalities; that we regard psychical research and general psychology as interpenetrating and at times fusing, and always sharing outlooks and methods; and finally, since all psychological phenomena are to some degree individualized, that we make the most of all of those methods by which individuality may be studied with a view of trying to understand individual paranormal gifts…17

Murphy believed that the existence of telepathy and clairvoyance had been amply established by spontaneous cases and laboratory evidence. He wrestled with the question of survival, impressed by some of the best evidence - he could not deny certain apparitional and mediumistic records showed a strong and consistent intent to communicate on the part of the dead18  - but was never fully convinced that it might not be explained in terms of psi in living minds. He chose to explain Ian Stevenson’s cases of the reincarnation type in terms of the ‘psychons’ theory proposed by British psychical researcher Whately Carington.19

Murphy was steadfast in his insistence that mainstream psychology, and science in general, should pay appropriate attention to rigorous parapsychological science instead of dismissing it.  ‘How far can any science get,’ he asked, ‘by laying down rules as to what can and what cannot happen? ... The scientific challenge to create a kind of field theory sufficiently open to provide a place for the main parapsychological findings still stands’.20

There Is More Beyond: Selected Papers of Gardner Murphy. Jefferson, N.C.: McFarland, 1989.

With Dale, LA. The Challenge of Psychical Research. New York: Harper and Row, 1961. May be read online here.

Murphy, G and Dale, L (1943). Concentration versus Relaxation in Relation to Telepathy. Journal of the American Society for Psychical Research 37, pp 2-16.

Murphy, G (1944). Psychical Phenomena and Human Needs. Removal of Impediments to the Paranormal. Journal of the American Society for Psychical Research 38, pp 2-23.

Murphy, G (1945). An Outline of Survival Evidence. Journal of the American Society for Psychical Research 39, pp 2-34.

Murphy, G (1948). Needed: Instruments for Differentiating between Telepathy and Clairvoyance. Journal of the American Society for Psychical Research 42(2), pp 47-9.

Murphy, G (1957). Triumphs and Defeats in the Study of Mediumship. Journal of the American Society for Psychical Research 51, pp 125-35.

Murphy, G (1966). Research in Creativeness: What Can It Tell Us About Extrasensory Perception? Journal of the American Society for Psychical Research 60, pp 8-22.

The Kansas Historical Society holds an archive of Murphy’s papers dated from c. 1924 to 1987, most from the 1950s and 60s. His interest in parapsychology is well-represented.  See here.

In 1966, Murphy appeared as himself in a television documentary on ESP research, The Baffling World of ESP.  https://www.imdb.com/title/tt4624678/?ref_=nm_flmg_slf_1