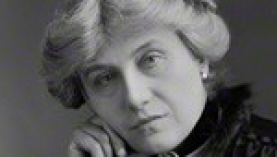 Edith Lyttelton was born in Saint Petersburg, the daughter of a British merchant, and was educated privately. As a young woman in London she moved in aristocratic and political circles, a friend of conservative MPs Arthur Balfour, who was later prime minister, and Alfred Lyttelton, whom she married in 1892.

Following a visit to South Africa she helped establish the Victoria League in 1901, which brought together high-ranking women from different sides of the political divide. Other roles included serving on the executive of the National Union of Women Workers; a founder of the War Refugees Committee; and deputy director of the Women's Branch of the Ministry of Agriculture. She was a substitute delegate in Geneva to the League of Nations in 1923, 1926-1928 and 1931.

Lyttelton wrote seven plays, which included the social dramas The Thumbscrew and Warp and Woof. In addition to her psychical research publications (see below), she wrote books on a variety of subjects, including a biography of her late husband in 1917, a history of the Sinclair family in 1926 (The Sinclair Family) and a description of her travels in the Far East and India in 1933 (Travelling Days).

Lyttelton joined the Society for Psychical Research in 1902. Following the early death of her husband in 1913, she experimented with automatic writing, initially adopting the pseudonym of ‘Mrs King’. Her identity was later revealed in a 1923 article by JG Piddington in the Journal of the Society for Psychical Research.1 Piddington noted in her scripts ‘persistent predictions of the War of 1914 dating back to a time well before any general apprehension had arisen of a serious risk of war between Britain and Germany’.2 Two scripts made in 1914 seemed to predict the sinking of the Lusitania the following year, and references to Munich and Berchtesgaden were later linked with Adolf Hitler.3

Lyttelton became interested in Spiritualism, and this influenced her to publish The Faculty of Communion in 1925.

She was appointed to the SPR council in 1928 and served as president from 1933-34. Her interest in psychical research, she stated, was mainly due to the desire to explain certain personal experiences, and either to confirm or to negate the idea that she possessed mediumistic powers.4 She did not believe that she was taken over by a spirit, but that often in ‘inner mind pictures’ she was in connection with ‘some other place’ and that this sixth sense was worthy of further exploration.5 She maintained that communication with the dead is possible, but not necessarily in a conscious state.

In February 1934, Lyttelton broadcast a talk on dreams and precognition for a BBC series called Enquiry into the Unknown, which was promoted as follows:

Dame Edith Lyttelton will stress the power of the unconscious part of our mind. It has power not only over our bodies. It can gather information of events in the past, or at a distance, or even in the future. She will mention the three kinds of mind within us: mind pictures, or visualisation within our mind; warnings and irresistible impulses. But the main matter of her talk this evening will be confined to the faculty of the mind, namely, the occasional power to know something which is going to happen in the future.6

She asked listeners to send in examples of their own experiences, which she subsequently investigated and published in her book Some Cases of Prediction.7

An extensive collection of her papers can be found in the SPR archives at Cambridge University Library and at the Churchill Archives Centre, Churchill College, Cambridge. Reference Code: GBR/0014/CHAN.

The Childhood of Jesus by G. Cummins (1939). The Spectator cited in Quarterly Transactions of the British College of Psychic Science 17/4, January.