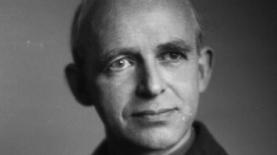 ER Dodds (1893-1979) was Regius Professor of Greek at Oxford University and an expert in classical mythology and philosophy. He had interests in psychical research, writing about mediumship, telepathy and survival, including a much cited paper ‘Why I Do Not Believe in Survival’.

Eric Robertson Dodds was born on 26 July 1893 in County Down, Ireland. He attended St Andrew’s College and Campbell College, Belfast, winning a scholarship to University College, Oxford, where he read classics and ancient philosophy and history. He later lectured in classics at Reading University and was appointed professor of Greek at Birmingham University in 1924.

In 1936 he succeeded Gilbert Murray as Regius Professor of Greek at Oxford University. He published numerous works on classical subjects and an autobiography, Missing Persons, in 1977.1

In Missing Persons, Dodds states that he dabbled in hypnotism, crystal-gazing, telepathy and automatic writing during his years as a student at Oxford University,2 and learned from this to be somewhat sceptical about the value of human testimony. He joined the Society for Psychical Research in 1913 aged twenty, and its governing council in 1927, serving as president from 1961 to 1963. His SPR obituarist writes:

He tackled psi from all sides, comparing Myers’s theory of the Subliminal Self with Freud’s theory of the Subconscious; working experimentally in early days at Oxford with Professor Schiller; learning the art of hypnosis by which he succeeded in evoking telepathic responses in certain subjects; attending experiments on the physical mediums, Willi and Rudi Schneider; and so on.3

Dodds experimented with mental mediums such as Hester Dowden, Geraldine Cummins and Gladys Leonard. From his work with Leonard, he concluded that telepathic communication was a more likely explanation than spirit contact for veridical information given in her statements.4

A paper titled ‘Supernormal phenomena in classical antiquity’5 presents examples of psi phenomena from the literature of ancient Greece and Rome, including instances of telepathy, clairvoyance, precognition, mediumship, and psychokinesis, and refers to the views of key thinkers such as Aristotle and Augustine of Hippo.6

A 1934 paper, Why I Do Not Believe in Survival, summarizes the arguments against postmortem survival and has been frequently cited in discussions of the subject.7 Belief in survival, for Dodds, requires a corresponding belief in pre-existence; however, he considers that since no evidence of adult maturity or of an operative factor in human personality, besides heredity and environment, have been noted by psychologists, this is unlikely, making survival equally so. He states, in agreement with the Cambridge philosopher CD Broad, that no philosophical grounds exist for believing in human immortality.

He goes on to point out that spiritualism is a recent phenomenon. Earlier written records show that communicators failed to give satisfactory evidence of identity: in classical times they were identified by mediums as gods or daemons and by late-medieval witches as demons.

He takes into account evidence of biological continuity between mind and body, for instance in the ageing process, also Broad’s concept of a surviving ‘psychic factor’ as an alternative to personal survival. He approvingly notes arguments in favour of telepathy as an explanation of much survival evidence, referring to communicators who were obviously fictitious, also to weaknesses and inconsistencies of much mediumistic material and to other factors tending to support the telepathy hypothesis. Turning to the Cross-Correspondences, an influential body of mediumistic material appearing to support survival, he questions the claims made for it and attributes evidence of design to the minds of the living.8

A chapter of his autobiography, headed ‘The Universal Question Mark’, emphasizes his generally sceptical outlook with regard to survival. However, a reviewer argued that at least one of Dodds’s proxy sittings with Gladys Leonard produced veridical information that is hard to explain otherwise without invoking ESP of ‘implausible dimensions’.9

The Greeks and the Irrational (1951). Los Angeles: University of California Press.

‘Supernormal’ occurrences in classical antiquity (1932). Journal of the Society for Psychical Research 27, 216-21.

Precognition and psychoanalysis (1934). Journal of the Society for Psychical Research 28, 204-6.

Two concordant experiences coincidental with a death (1962). Journal of the Society for Psychical Research 41, 337-46.

Experimental research at the universities and in the society (1962). Proceedings of the Society for Psychical Research 53, 247-63.

Supernormal phenomena in classical antiquity (1971). Proceedings of the Society for Psychical Research 55, 189-237.

The feasibility of a physical theory of ESP (1967). In Science and ESP, ed. by J.R. Smythies. London: Routledge & Kegan Paul.