Francis Bacon and the Occult 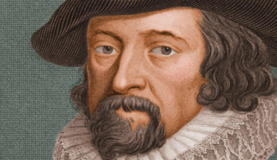 The natural philosopher Francis Bacon (1561-1626), a key figure of the scientific revolution, is widely believed to have been sceptical of psychic phenomena. In fact, his writings show a strong belief in the occult and also in the possibility that its manifestations could be investigated empirically; his reluctance to do so arose more from theological than from scientific considerations.  This article briefly examines his views.

The scientific revolution of the sixteenth and seventeenth centuries – represented by pioneers such as Francis Bacon, Johannes Kepler, Galileo, Robert Boyle and Isaac Newton – is often considered to have liberated humanity from religious oppression and superstition.1 It was at this time, one commentator writes, that modern notions of ‘a sharp distinction between normal and paranormal, between science and pseudoscience, reality and magic’ began to form, and ever since, these boundaries have ‘divided parapsychology from conventional science’.2

However, modern historians no longer argue that the scientific revolution was characterized by a secular or even anti-supernaturalist thrust. For pioneers such as Bacon, Christian theology was never the target, but rather the Aristotelian or scholastic traditions that dominated university culture, whose dogmatic and anti-empirical frameworks they aimed to replace with systematic observation and experiment. Bacon, Galileo, Newton and others not only accepted occult beliefs and practices, but actively investigated alchemy, astrology and biblical prophecy. There is little doubt, too, that occult and mystical beliefs were sometimes integral to their achievements.3

Identifying ‘the general root of superstition’, Bacon lamented that ‘men observe when things hit, and not when they miss, and commit to memory the one, and forget and pass over the other’.4  This is what psychologists now refer to as ‘confirmation bias’, the tendency of the mind to inflate the meaning of perceptions and memory to confirm prior belief. Not surprisingly, Bacon’s cautionary note has been favourably cited by today’s sceptics of the paranormal to imply that he shared their beliefs.5

However, this and similar critiques are often quoted out of context. Historians have shown that Bacon’s ground-breaking philosophy of science drew heavily on occult writers.6 These include ideas by authors of Renaissance ‘natural magic’, such as Giambattista della Porta, Cornelius Agrippa, and Paracelsus, who advocated scientific experimentalism years before Bacon. According to science historian John Henry, Bacon practised some parts of the magical tradition (of which he had started writing a history), and his own philosophy was ‘heavily indebted to magic’.7

Some of Bacon’s occult beliefs would be considered absurd even by the most open-minded parapsychologist today. For instance (like many of his peers), he believed in the medical efficacy of the ‘weapon salve’ – a ritual of sympathetic magic in which healing ointment was applied to the weapon that caused the wound rather than to the wound itself. Another widespread belief shared by Bacon was this:

It is an usual observation, that if the body of one murdered be brought before the murderer, the wounds will bleed afresh. Some do affirm, that the dead body, upon the presence of the murderer, haft opened the eyes; and that there have been such like motions, as well where the parties murdered have been strangled or drowned, as where they have been killed by wounds.8

Bacon also wrote extensively on phenomena that are studied by modern parapsychologists. He believed in ‘fascination’ and ‘imagination’, early terms for what are now called ‘psi phenomena’, which he defined as ‘transmissions and operations from spirit to spirit, without the mediation of the senses’ and the ‘power and act of imagination intensive upon other bodies than the body of the imaginant’.9

He was further open to the view, firmly held by parapsychologists today, that altered states of consciousness – sleep, meditation, trance and ecstasies, and, not least, the process of dying – were conducive to certain parapsychological phenomena. Regarding premonitions, he wrote:

[T]he mind, when it is withdrawn and collected into itself, and not diffused into the organs of the body, hath some extent and latitude of prenotion, which therefore appeareth most in sleep, in extasies, and near death, and more rarely in waking apprehensions; and is induced and furthered by those abstinences and observances which make the mind most to consist in itself.10

Bacon also noted the importance of distinguishing between two different types of ‘divination’: primitive divination – held to originate in the occult capacities of the living mind – and divination by influxion, caused by disembodied spirits.11  This directly anticipates discussions by modern parapsychologists of hypothetical agency of discarnate spirits as opposed to psi among the living.

Still, Bacon was not entirely uncritical of reported parapsychological phenomena. Observing that ‘they require a great deal of examination ere we conclude upon them’, he suggested, for example:

I would have it first thoroughly inquired, whether there be any secret passages of sympathy between persons of near blood; as parents, children, brothers, sisters, nurse-children, husbands, wives, etc. There be many reports in history, that upon the death of persons of such nearness, men have had an inward feeling of it. I myself remember, that being in Paris, and my father dying in London, two or three days before my father’s death, I had a dream, which I told to divers English gentlemen; that my father’s house in the country was plastered all over with black mortar.12

Here, Bacon seems to recommend investigations of telepathic ‘crisis’ cases, whose first systematic explorations would only occur in the late 1800s, over two centuries after his death.13

Some trial also should be made, whether pact or agreement do anything; as if two friends should agree, that such a day in every week, they being in far distant places, should pray one for another; or should put on a ring or tablet one for another’s sake; whether if one of them should break their vow and promise, the other should have any feeling of it in absence.14

He emphasized the importance of replication, proposing that scientific effects should be independently confirmed by other experimenters and observers. Unlike many sceptics today, however, he was able to accept that research involving humans requires a far more nuanced and patient approach than is needed for experiments with physical objects. Regarding his proposed tests of parapsychological effects, for example, he wrote that ‘men are to admonished, that they do not withdraw credit from the operations by transmission of spirits and force of imagination, because the effects fail sometimes’15 – as is commonly the case with contemporary critics.

Bacon described many such experiments at length, but if he ever conducted any of them he never published their results. What is certain is that he dismissed out of hand any idea that occult powers might be applied in order to obtain real world effects – a practice he regarded as ‘unlawful’ in line with Anglican orthodoxy.16

Ultimately, he also rejected any idea of using empirical means to try to establish whether the mind survives death. It’s true that his writings appear somewhat ambiguous in this regard. Addressing questions of the nature of the mind, he seemed to lament the complete absence of attempts to systematically investigate ‘how far it is exempt from laws of matter’ and ‘of the immortality thereof, and many other points’, observing that these things ‘have been not more laboriously inquired than variously reported; so as the travel therein taken, seemeth to have been rather in a maze than in a way’.17

Yet in the same breath he warned fellow natural philosophers to steer clear of such research, writing that although he thought this subject might be more effectively investigated than it had been hitherto,

yet I hold, that in the end it must be bounded by religion, or else it will be subject to deceit and delusion: for as the substance of the soul in the creation was not extracted out of the mass of heaven and earth, by the benediction of a producat, but was immediately inspired from God; so it is not possible that it should be, otherwise than by accident, subject to the laws of heaven and earth, which are the subject of philosophy; and therefore the true knowledge of the nature and state of the soul, must come by the same inspiration that gave the substance.18

To paraphrase: having argued that scientific explorations of the nature of the mind and its state after death were possible in principle, Bacon categorically rejected the idea of actually doing so, insisting that relevant insights must come not by natural but properly supernatural means, that is, through divine inspiration or revelation. A man of his time, his objections were not scientific or methodological, but squarely theological.

Here it’s important to note that by profession Bacon was not a scientist but a high-ranking politician/administrator, with the title Lord Chancellor and Solicitor General of England. In this capacity, he expressed his religious worries about magic by formulating bills for the prosecution of witchcraft:

Where a man conjures, or invocates wicked spirits, it is felony.

Where a man doth use or practise any manner of witchcraft, whereby any person shall be killed, wasted, or lamed in his body, it is felony.

Where a man practiseth any witchcraft, to discover treasure hid, or to discover stolen goods, or to provoke unlawful love, or to impair or hurt any man’s cattle or goods, the second time, having been once before convicted of like offence, it is felony.

Where a man useth the craft of multiplication of gold or silver, it is felony.19

Bacon’s proscription against the invocation of wicked spirits, should not be taken to imply a tolerance of mediumship as practised today. Early modern intellectuals respected biblical authority and considered any attempt to contact the spirit world with profound concern.20 For example, the Cambridge mathematician John Dee had every reason not to publicize his ostensible communications with angels, which he claimed to have received through crystal-gazing: posthumously published, his descriptions were presented as a case study in necromancy and prefaced by a stern warning that, although authentic, they must be considered a ‘Work of Darknesse’, since Dee was obviously deceived by devils.21

As late as the mid-nineteenth century, the great British physicist Michael Faraday seemed plagued by similar religious worries when he debunked ‘table-tilting’, a practice associated with spiritualism. Slight table movements, Faraday showed in a series of brilliant experiments, were not caused by ‘supernatural’ powers, but rather by unconscious muscular motions of the sitters22 – an episode seen as yet another triumph of secular science over paranormal superstitions.23 Privately Faraday, a devout Christian who subscribed to a literal reading of the Bible, revealed the source of his scepticism – that the new craze was the work of ‘unclean spirits’ let lose by Satan to delude man at the end of times, as predicted in the Book of Revelation.24 Challenged to explain cases that his theory could not explain – for instance where tables moved and levitated untouched by human hands – he declined, on the grounds that such phenomena were clearly impossible.25 26

Cantor, G. (1993). Michael Faraday: Sandemanian and Scientist: A Study of Science and Religion in the Nineteenth Century. London: Macmillan.

Casaubon, M. (ed.) (1659). A True & Faithful Relation of What passed for many Yeers Between Dr. John Dee and Some Spirits. London: Maxwell & Garthwait.

De Morgan, A. (1863). Preface to “C. D.” [Elizabeth De Morgan], From Matter to Spirit. The Result of Ten Years’ Experience in Spirit Manifestation. Intended as a Guide to Enquirers (v-xlv). London: Longman & Co.

Sommer, A. (2014). Psychical research in the history and philosophy of science. An introduction and review. Studies in History and Philosophy of Biological and Biomedical Sciences 48, 38-45.