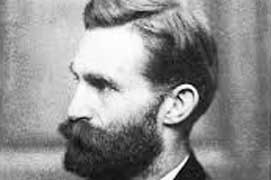 Frank Podmore (1856-1910) played a significant role in the early years of the Society for Psychical Research, initially as an investigator, later as a proponent of mainly non-paranormal interpretations of psi phenomena.

Podmore was born in Elstree, Hertfordshire, the son of Thompson Podmore, an Anglican priest and headmaster of Eastbourne College. He was educated at Haileybury and obtained degrees in classics and science at Pembroke College, Oxford, going on to work for the Post Office, where he remained until his death.

He became interested in psychical phenomena while at Oxford, and was one of the first to join the newly founded Society for Psychical Research (SPR), quickly becoming a leading member elected to its governing Council. He was also a founding member of the Fabian Society, an organization promoting the advancement of democratic socialism. He published a major literary work on the life and belief of Robert Owen1 and numerous books on psychical research.

For two years from 1875 he contributed frequent articles about spiritualism to the journal Human Nature. He attended a séance by the slate-writing medium Henry Slade which he found impressive and he addressed the National Association of Spiritualists in 1880. However, by the 1990s he had become sceptical about many of the claims of psychic phenomena.

Podmore married Eleanore Bramwell in 1891, but the marriage was a failure and they later separated without children. He then lived with his brother Claude, rector of Broughton, near Kettering. He died in 1910 by drowning in a small pond in Malvern in Worcestershire. The death was declared officially to have been accidental; however, some commentators believed it was suicide, after gossip about a homosexual relationship led to him being dismissed from his job.2

Work With the SPR

In the SPR’s early years, Podmore worked with Frederic Myers and Edmund Gurney investigating personal reports of spontaneous phenomena, such as telepathic interactions and apparitions – work that was published in 1886 in two volumes as Phantasms of the Living. He reported on cases of alleged witchcraft, poltergeists, mesmerism, clairvoyance and telepathy, spiritualism and mediumship.

Podmore’s change of view can be seen in the contrast between his 1883 report about a poltergeist case in Worksop in the north of England, which he persuasively described as genuine,3 and a reassessment of the case that he published in 1896, in which he argued it had been staged fraudulently.4  This may have been caused by an unsympathetic review two years earlier of his Apparitions and Thought Transference by HG Wells, to whom it had been sent by the journal Nature. Wells dismissed Podmore’s on-the-spot observations and reasoning out of hand, fearful that support for such claims by psychical researchers would lead to a recrudescence of superstition, and ‘the recognition of ghosts, witchcraft, miracles, and the pretensions of many a shabby-genteel Cagliostro’.5  Historian Brian Inglis suggested Wells’s harsh words, in particular his insistence that educated researchers were being taken for dupes by members of the lower classes, embarrassed Podmore, and effectively set him on a sceptical path, preferring to be seen as ‘a detached, scientific, no-nonsense commentator on psychic affairs’.6

His writings on a wide variety of psychical phenomena now took a decidedly critical tone, particularly with regard to spirit mediums, reinforced by the exposure of several who had previously been regarded by many as genuine.7 He also questioned the validity of some who other researchers had endorsed, as for instance William Crookes had in the case of DD Home.  In this respect he anticipated later critics, proposing ingenious and creative explanations based on fraud, conjuring tricks and witness gullibility to explain a wide range of psychic claims.8

Podmore’s scepticism made him unpopular with spiritualists such as Alfred Russel Wallace, who complained that his method ‘suffered from a fundamental defect: it ignored JS Mill’s dictum that ‘an argument is not answered until it is answered at its best’.9 But his SPR colleagues respected his perseverance and thoroughness. Eleanor Sidgwick wrote after his death:

Mr Podmore’s critical attitude, combined with his wide and thorough acquaintance with facts and theories, actual and historical, concerning the subjects with which the Society deals, was of immense value in our work… The Society will be fortunate, indeed, if it finds another critic equally friendly, learned, painstaking, and accurate, to take Mr Podmore’s place.10

It should also be noted that Podmore, unlike later critics whom in other respects he closely resembles, continued to believe in the reality of telepathy, for instance in the case of Leonora Piper, considering it the minimum that was needed to explain trance phenomena he could not otherwise account for.11 He also believed that ghosts might be hallucinations conveyed from one mind to another.12

Inglis, B. (1977). Natural and Supernatural. Sevenoaks: Hodder and Stoughton Limited.

Podmore, F. (1894). ‘Experiments at Milan with Eusapia Palladino’. Proceedings of the Society for Psychical Research 9, 218-24.

Podmore, F. (1894). Apparitions and Thought-Transference: An examination of the evidence for telepathy. London: Walter Scott, Ltd.