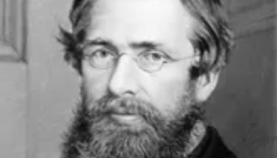 Alfred Russel Wallace (1823-1913), a British naturalist who conceived the theory of evolution through natural selection independently of Charles Darwin, was also a psychical researcher and spiritualist. His views brought him into conflict with his scientific peers, and his endorsement of mediums thought to be fraudulent was also criticized by psychical researchers.

Alfred Russel Wallace was born in Llanbadoc in Wales. After attending Hertford Grammar School, he worked as a builder and surveyor, then taught at the Collegiate School in Leicester. His real interest lay in collecting insect species: from 1854 to 1862, he travelled in Singapore, Malaysia and Indonesia to collect specimens and to study natural history. During this time, he formulated ideas about natural selection which he sent to Charles Darwin in 1858.

On his return to England, he lectured and wrote articles about his discoveries and theories. Numerous honours for his work in the field of natural history included the Royal Medal in 1868, the Gold Medal of the Société de Géographie in1870 and the Order of Merit in 1908. He was appointed president of both the anthropology section of the British Association in 1866 and the Entomological Society of London in 1870 and was elected to the Royal Society in 1893. Several hundred species of plants and animals have been named after him, as well as craters on Mars and the moon. A medallion commemorating his work was unveiled in Westminster Abbey in 1915.

Wallace published more than twenty books and some seven hundred articles, essays, and letters. His interests encompassed the improbability of life on Mars,1 the feasibility of phrenology,2 a distrust of the efficacy of vaccination,3 and a concern for the plight of the working classes.4

Wallace first became interested in occult matters in 1844 when he attended a demonstration of mesmerism by Spencer Hall, having already become intrigued by phrenology.5  Experimenting with his students at Leicester he found he was able to induce mesmerist effects.

Following his return to England in 1862, he began to investigate anomalies such as table-turning and spirit rappings, sitting with notable séance mediums of the day, such as William Eglinton, DD Home and Mrs Guppy, and claiming to have repeatedly witnessed materializations, slate-writing, music from unknown sources, apports, and the like.6  This led him to a belief in the existence of ‘preterhuman intelligences’, some of which, although invisible and intangible, act on matter and influence human minds.7  By 1866 he was a confirmed spiritualist,8 seeking to explain the phenomena he witnessed in scientific, philosophical and theosophical terms rather than as a religious belief.9

However, physical mediumship was widely regarded as fraudulent, even by many psychical researchers, and Wallace’s defence of individuals who were either accused of faking phenomena or caught in the act – including Katie Cook (sister of Florence Cook), Francis Monck, William Eglinton, Henry Slade and the ‘spirit photographer’ Frederick Hudson10 – damaged his reputation.11

In 1869, he was a member of the Dialectical Society which undertook research into these phenomena.

He carried his advocacy of spiritualism to the USA, touring there the between 1886 and 1887, and claiming to have witnessed strong materialization phenomena in Boston, Washington and San Francisco.

Wallace held that the human spirit’s development was a necessary aspect of evolution (a view rejected by Darwin, Thomas Huxley and others of Darwin’s scientific supporters). He was compared with William Crookes in accepting the influence of spirits ‘upon the mind and body of a living human being’.12

He insisted that the psychical phenomena of mediumship did not violate any natural laws, including the law of conservation of energy.

Neither matter nor force would ever be created or annihilated, even though it might appear so to us. In an infinite universe the great reservoir of matter and force must be infinite, and the fact that an ethereal being should be able to exert force ... would be no more a real miracle, than is the perpetual raising of millions of tons of water from the ocean, or the perpetual exertion of animal force upon the earth, both of which we have only recently traced, immediately to the sun, and perhaps remotely to other and varied sources lost in the immensity of the universe. ... All would be still natural. The great laws of nature would still maintain their inviolable supremacy.13

Darwin, Huxley and other of Wallace’s scientific peers were uneasy about his embrace of spiritualism. He was publicly denounced by William Carpenter and other critics of psychical research. He was also attacked by researchers themselves, who feared that his apparent credulity damaged the credibility of their nascent discipline, for instance when he argued that an individual who duplicated paranormal phenomena by normal means must possess mediumistic ability.14

Frederic Myers contradicted his view that ‘that all or almost all supernormal phenomena are due to the action of spirits of the dead’.15 A brief obituary in the journal of the Society for Psychical Research16 praised his work as a naturalist but avoided any reference to his spiritualism activities.

Later commentators have been less harsh, including Wallace among the notables who founded the Society,17 and associating him with Myers and Henry Sidgwick, two of its most important figures.18  Guy Lyon Playfair wrote approvingly of his research activities,19 while MJ Kottler argued that concerning spiritualism ‘Wallace presented a formidable case, based on considerations of utility only, against the action of natural selection alone [author’s italics] in man’s development’.20

The Scientific Aspect of the Supernatural (1866). London: F. Farrah.

Contributions to the Theory of Natural Selection (1870). London: Macmillan & Co.

A Defence of Modern Spiritualism (1874). Boston: Colby and Rich.

The Psycho-Physiological Sciences and their Assailants (et al, 1883). Boston: Colby and Rich.

Darwinism: An Exposition of the Theory of Natural Selection, with Some of Its Applications (1889). London: Macmillan & Co.

On the tendency of species to form varieties; and on the perpetuation of varieties and species by natural means of selection (1858). Zoological Journal of the Linnean Society 3 (20 August): 46–50.

On the physical geography of the Malay Archipelago (1863). The Journal of the Royal Geographical Society of London.

The origin of human races and the antiquity of man deduced from the theory of ‘Natural Selection’ (1864). Journal of the Anthropological Society of London, Vol. 2. 158-87.

A letter of support sent to the Berne International Anti-Vaccination Congress held on 28 September 1883 and following days. https://people.wku.edu/charles.smith/index1.htm

Account of a spiritualistic test ‘Nellie Morris’ (1888). The Journal of the Society for Psychical Research 3, 273-88.

Correspondence: The Arensburg Poltergeist (1899). The Journal of the Society for Psychical Research, 28-9; 93.

See here for a comprehensive list of Wallace’s publications.

Darwin, Charles (1859). On the Origin of Species. London: John Murray.

Wallace, A.R. (1866). The scientific aspect of the supernatural. Cited in ‘The term “supernatural” in writings by nineteenth-century spiritualists and psychical researchers’ by C. Alvarado (2008). Paranormal Review 45.

Wallace, A.R. (1883a). Letter of support sent to the Berne International Anti-Vaccination Congress held on 28 September 1883 and following days.