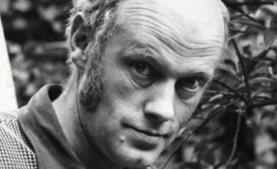 Guy Playfair (1935-2018) was an English journalist and psychical researcher, best-known for his joint investigation of the Enfield poltergeist case and his book about it, This House is Haunted (1980).

Guy Playfair was born on 5 April 1935 in Quetta, India (now in Pakistan), the son of Major General Ian Playfair and novelist Jocelyn Playfair (a member of the Society for Psychical Research). He was educated in Gloucestershire and then read modern languages at Pembroke College, Cambridge where he specialized in Russian. He wrote for the university magazine Granta, translating some of Chekhov’s stories into English for the first time. He played several musical instruments, including a harpsichord he built from a kit, and maintained an interest in classical music in particular.1

After two years of National Service, Playfair worked as a translator for the RAF in Iraq. He later went into journalism, writing for Life magazine and as a freelancer in Rio de Janeiro, Brazil, where he developed an interest in psychical research. In 1973 he joined the Society for Psychical Research and the following year returned to England, devoting the rest of his life to researching and writing articles about psychical phenomena.

Playfair considered Brazil ‘the most psychically-oriented country on earth, where nothing can surprise anybody’ and where making contact with spirits constituted perfectly normal behaviour.2 He was particularly influenced by a serious study of Hernani Guimãraes Andrade, who founded the Brazilian Institute for Psycho-Biophysical Research (IBPP) in 1963.

Despite initial scepticism, Playfair became increasingly intrigued by the phenomena he investigated and was eventually persuaded of their genuineness.  He researched a number of cases of ‘psychic surgery, automatic writing, materializations and poltergeist activity’,3 and experienced a personal healing encounter at the hands of Edivaldo,4 a psychic surgeon local to Rio de Janeiro. His investigations also covered Kardecist Spiritism, in which he claimed a ‘sympathetic interest’.

Playfair’s The Flying Cow (1975) describes psychical research in Brazil, with chapters on Chico Xavier, Mirabelli, Arigo, Edivaldo and others, as well as poltergeist, survival and reincarnation cases. The biological organizing model explored by the researcher Hernani Guimãraes Andrade is also discussed.

Playfair joined the SPR in 1973 and was later elected to its governing Council, a post he held until his death. He wrote extensively about his views and experiences in the SPR journals and magazines, his fluency in Portuguese and Russian giving him access to people and publications normally out of reach for English-speaking scientists. He also supported the College of Psychic Studies, serving on the editorial board of its Light magazine, and was a trustee of the Dragon Trust, whose mission was ‘to explore rumours about the power and properties of ancient, especially prehistoric, “sacred” places and monuments’.5

Playfair formed a friendship with Uri Geller, being sceptical of his claimed powers at first, but becoming increasingly convinced of their genuineness. His numerous interviews with Geller (now lodged in the SPR’s audio archives) became the basis of a biography The Geller Effect .6

Playfair partnered with Maurice Grosse to investigate the 1977–78 Enfield poltergeist case, which has been described as the most fully documented of its kind in the SPR’s history.7  This research lasted almost two years, involving all-night vigils and the production of a large quantity of written documents, also many hours of tape-recordings (recently digitalized). Playfair was convinced by the veracity of the phenomena, some of which he witnessed. Against claims by sceptics, he argued that fraud by the children could account for only a tiny percentage of the events and pointed out that substantial offers of money by newspapers in return for a confession were never accepted. He concluded that poltergeists are not spirits of the dead, but added, ‘I have no problem in treating them as if they were separate entities, which is what they appear to be, and I cannot rule out some kind of discarnate component in their make-up’.8

Playfair’s published account of the events, This House is Haunted (1980), is based on the investigators’ research log (some omissions were clarified by the later publication of tape recording transcripts).9 The book has been the basis of numerous subsequent films and documentaries.

Playfair died on 8 April 2018, which was the same day as a BBC Radio 4 broadcast titled The Reunion, a gathering of individuals directly involved in the Enfield investigation.

Playfair became interested in the possibility of telepathy between twins after hearing from the son of Norris McWhirter about McWhirter’s reaction at the moment his twin brother Ross was fatally shot by the IRA. He subsequently interviewed dozens of people about their experiences and devised experiments to test his hypothesis, publishing successful results in his 2002 book Twin Telepathy: The Psychic Connection.  He speculated that close emotional bonding creates a mutual ‘empathy’ field, and that an explanation might eventually be found in quantum physics concepts of entanglement and non-locality.10

Playfair’s article on Twin Telepathy can be read here.

Playfair participated in ganzfeld telepathy experiments conducted by Melvyn Willin in the 1990s, acting as ‘sender’ along with Maurice Grosse and others.11

Playfair and SPR colleague Montague Keen investigated statements given by Christine Holohan, a medium, with regard to details of the murder of Jacqui Poole, which they concluded offered plausible evidence of survival of death.12

The Cycles of Heaven: Cosmic Forces and What They Are Doing To You (1978, with Scott Hill). New York: St Martin’s Press.

If This Be Magic: The Forgotten Power of Hypnosis (2011). Guildford, UK: White Crow Books.

Correspondence: Anita Gregory and This House is Haunted (1980). Journal of the Society for Psychical Research 50, 538-41.

Koestler, Mann and Schopenhauer: Supporting evidence for a coincidence (1984). Journal of the Society for Psychical Research 52, 377-79.

Enfield revisited: The evaporation of positive evidence (1988, with Maurice Grosse). Journal of the Society for Psychical Research 55, 208-19.

Peixotinho: a latter-day Brazilian Kluski (1993, with John Beloff). Journal of the Society for Psychical Research 59, 204-6.

A possibly unique case of psychic detection (with Montague Keen) (2004). Journal of the Society for Psychical Research 68/1, 1-12.

The return of Katherine Bates: an evaluation of a claimed autobiography (2005). Journal of the Society for Psychical Research 69/3, 121-27.

Playfair also published a regular ‘Mediawatch’ column in the Paranormal Review, in which he discussed the media’s treatment of paranormal-related topics.

Fryer, J.  (2018). He was a respected scientist and  'born sceptic' … so just how did a Cambridge-educated son of a General become Britain's grandest ghostbuster? Daily Mail. [Web post, 13 May.]