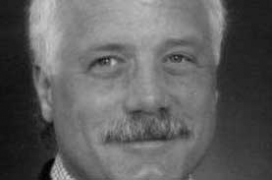 Induced After-Death Communication Therapy is a bereavement therapy designed and practiced by Allan L Botkin. It is based on the use of EMDR, a psychotherapeutic technique sometimes used to treat post-traumatic stress, here extended to facilitate healing visions of deceased loved ones. The treatment method is described in Botkin’s 2005/2014 book Induced After-Death Communication, on which this article is based.

Please note: This article is for information purposes only, and should not be taken as endorsement or recommendation of IADC as a commercially-available therapy.

Eye Movement Desensitization and Reprocessing (EMDR) is a procedure pioneered by Dr Francine Shapiro in the late 1980s for the treatment of post-traumatic stress. The patient is asked to focus on a disturbing thought, sensation, feeling or image, while simultaneously following with her eyes rhythmic horizontal left-right hand movements made by the therapist, keeping her head still. EMDR is claimed by practitioners to achieve quick psychological breakthroughs. It remains controversial and the underlying mechanism is unknown, although it is speculated that the rapid eye movements help to induce a quasi-sleep state in which the brain can rapidly process and integrate information.1 The result, Botkin believes, is that patients who undergo EMDR are able to treat a trauma memory in a more abstract and detached manner.

Botkin trained in EMDR while working at a Chicago clinic that treated war veterans suffering from PTSD. He was amazed at the outcomes, sometimes seeing changes in patients after a single session that normally would take years. In 1992, Botkin and a medical colleague HJ Lipke published some findings,2 notably on the value of focusing the treatment on sadness, as the core emotion in bereavement, which also helps assuage secondary emotions such as anger and guilt.

Botkin says he discovered the basis of his IADC therapy while treating a particular patient. Sam was a veteran who had suffered for 28 years from grief over the death of Le, an orphaned ten-year-old Vietnamese girl to whom he had become emotionally attached. As Sam, feeling overwhelming pain, made the left-right eye movements, he felt the distress level diminish, and then started to smile through his tears. He later stated:

When I closed my eyes, I saw Le as a beautiful woman with long black hair in a white gown surrounded by a radiant light. She seemed genuinely happier and more content than anyone I have ever known … She thanked me for taking care of her before she died. I said, ‘I love you, Le,’ and she said ‘I love you too, Sam,’ and she put her arms around me and embraced me. Then she faded away.3

Sam was effectively cured of his grief. Botkin assumed he had had experienced a hallucination, but was struck by the patient’s conviction that it was Le’s genuine presence, and had never previous seen a hallucination have such a positive effect.

A similar experience occurred in an EMDR treatment the following day with another Vietnam veteran. At its conclusion the patient stated that he had encountered and been reassured by a close friend who had been killed in battle. During three weeks of EMDR treatments a total of six patients had said they were visited by deceased loved ones, and that this had caused them to experience high levels of relief.

Looking through his notes, Botkin realized he’d used a slightly different technique with these patients: a set of eye movements unaccompanied by specific instructions as the patient’s grief was subsiding toward the end of the session. He decided to try purposely to induce an after-death communication using this technique, and succeeded with a patient who was visited by his daughter, who had died at age thirteen of a heart attack.

Botkin named the new technique Induced After-Death Communication (IADC) Therapy and started to use it routinely. He claims to have induced a communication of this type in the grief treatment of 98% of PTSD patients and 75% of other patients. His follow-ups indicated that the improvements were long term. He says that EMDR practitioners he subsequently trained were also able to induce these experiences, and with similar excellent outcomes.

Botkin’s method was followed by other practitioners, who agreed that the visions experienced by patients have certain consistent characteristics:

Communicators appear very willing to communicate, concerned to convince the patient as to their own well-being and to offer reassurances about death and dying. However, they do not always say what the patient wants to hear. Nor is the individual who appears necessarily the one with whom the patient had hoped to make contact.

Communicators appear as they did in life, although healthier and younger if they died in old age, and older if they died very young. Their personality is generally unchanged, with the exception that abusive persons now appear compassionate and remorseful. They may advise about the patients’ problems, often recommending forgiveness; they may also forgive the patient or ask for forgiveness in turn. They often give touches or hugs that are felt as real, and may sometimes ask for a message to be passed on to another living person.

Botkin further notes that the experience can involve more than one deceased person. He summarizes cases in which up to 100 deceased personalities participated, including victims of the terrorist attacks on the World Trade Centre on 11 September 2001.

Botkin provides some cases in which information given by the communicator is later verified as accurate. For instance, he cites at length a magazine article written by a cognitive neuroscientist about an IADC experience during which, among other things, she saw her deceased friend playing with a dog that apparently belonged to his (living) sister. She had not been aware at this time that the sister owned a dog. When she checked, she learned this that was the case, and that the dog was the breed she saw in her vision.4

A second case involved a patient who encountered his deceased adoptive father, and heard him say, ‘Forgive me for being so cold when we adopted you’. He was puzzled by this, as he could only remember his father being warm and loving. His mother later told him his father had had difficulty accepting the newly-adopted baby and refused at first to hold it, a situation that resolved after a few months.5

In a third case, the patient hoped his deceased friend would have a message for his widow, and was given an image of two hands clasping. This meant nothing to him, but was immediately recognized by the widow, who wept and said that the night before she had dreamed of holding hands with her late husband.6

Botkin further describes the case of a man who was consumed by guilt for 25 years from having accidentally killed a young family of three in a car crash. During his experience the family appeared, telling him they were happy in their present state and that they forgave him. He observed that the twelve-year-old daughter had short red hair and freckles, and that the father was delighted to be able at last to move freely. Until this time the patient had known nothing about the family, and had avoided even looking at photographs of them. Now he learned that the daughter’s appearance in his vision matched the reality, and that the father had been confined to a wheelchair by multiple sclerosis.7

Botkin states that certain conditions on the part of the patient are required for a successful IADC. Patients must be willing to fully access the depth of their sadness through EMDR, for which some are not ready. They must also show receptivity to anything that can happen as the core sadness begins to diminish, allowing the experience to develop but not striving to make it happen: high or rigid expectations will tend to block it. (Botkin speculates that the higher success rate in the veterans’ clinic might have been due to patients being unaware they would have an IADC and having no prior expectations.) In order to work, the procedure must also be followed precisely.

Conversely, Botkin says, some elements are not necessary:

Botkin summarizes three failures: a man who repressed his emotions with over-intellectualizing, and disrupted the induction with too much thinking; a woman who had been unwillingly pressured into therapy by her family, and who experienced memories not of bereavement but of abuse in childhood; and a veteran who found reliving the deaths of his comrades too painful to bear.

Botkin learned by chance that an IADC can be shared. He was performing the therapy observed by a psychologist, who himself was performing the eye movement in order to relax. This induced in the psychologist a vision of a swampy area including a pond bordered by reeds and a willow tree. Identical imagery was reported by the patient, originating from his memory of his deceased uncle’s farm. The three participants (Botkin, patient and psychologist) repeated the process with the same result. Botkin and the psychologist later experimented with eight other patients, producing similar results: the psychologist would write out his own experience prior to the patient verbally reporting it, and the accounts largely matched. Other practitioners told of similar experiences.

Botkin learned by experiment that this sharing only occurs with observers who have personal experience of IADC and who know something about the patient’s issues. He concurs with a fellow practitioner who wrote: ‘I firmly believe that the energy of an IADC is linked to the power of love. The stronger the empathy of the therapist, the greater the likelihood of tapping into an IADC’.8

Botkin notes several characteristics of IADCs that, he argues, distinguish them from subjective hallucinations:

Similarities with the near-death experience include

In comparison with spontaneous ADCs, Botkin notes that IADCs tend to be richer and more elaborate. The controlled environment provided by the involvement of a therapist tends to lead to a more complete resolution of the patient’s emotional issues. He also notes that an IADC can be followed by a spontaneous ADC that provides further information and relief.

IADC therapy has grown rapidly. Botkin opened an institute devoted to IADC training, research and therapy in Germany in 2011. In 2014 when Botkin’s book, first published in 2005, was republished, hundreds of trained IADC therapists were offering their services around the world.  Botkin predicts that IADC ‘will greatly impact mainstream grief work in the future’.10

More information can be found at the website http://induced-adc.com.

Videos of Botkin and his patients’ comments on IADC can be seen here. 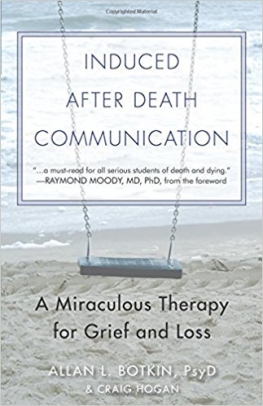