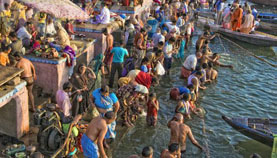 The case of the young son of a lawyer in India who, at three years of age, began making statements that recalled a previous life as the pampered son of a corrupt Brahmin official in a distant city.

Varanasi (formerly Benares) in north-east India is a destination for pilgrims, the most important of such places along the banks of the River Ganges. Thousands visit it every year to bathe in the holy waters of the river, using ghats (piers with steps for the purpose of bathing).  The ghats are run by pandas, Brahmins whose job it is to help the pilgrims in exchange for a fee, but who during this period often exploited them for money. One particularly wealthy and important panda was named Babu Pandey, whose young son Jai Gopal died in 1922.

In 1926, K Sahay, a lawyer by profession, was nursing his sick wife at home when his son Jagdish Chandra, then three years and three months old, unexpectly asked him to get a motor car. (Cars were rare in India in the 1920s, although the boy would have seen visitors arriving in them). When his father demurred, Jagdish Chandra remarked that he could get ‘his’ car from the house of Babuji. In response to queries he replied that Babuji lived in Benares and was ‘his father’, giving further details about a previous life.

K Sahay then wrote to the Leader, a well-known English-language paper of northern India, as follows:

My son, Jagdish Chandra, gives the story of his previous life in a very connected form. He gives his father’s name as Babuji Pandey, place of residence Benares, describes the house of Babuji in Benares, and makes particular mention of a big gate, a sitting room, and an underground room with an iron safe fixed in one of the walls.

He also describes the courtyard in which Babuji sits in the evening. He describes that Babuji and the people who collect there drink bhang [an intoxicating drink]. Babuji has malish [massage] on his body and paints his face with powder or earth before his bath on washing his face in the morning. He describes two motor cars and one phaeton with a pair [of horses] and says that Babuji had two sons and one wife and all have died. Babuji is all alone. He also described many private and family matters.

I have no friends or relatives at Benares; my wife has never been there. I never heard before of Babuji.

I invite all gentleman who may feel interested to ascertain the truth of the story given by the boy in a scientific spirit.

K Sahay also listed seven persons who had talked with Jagdish Chandra about his memories.

K Sahay wrote again to the paper the following week to say he had received letters from people unknown to him in Benares identifying ‘Babuji’ as Babu Pandey, otherwise known as Pandit Mathura Prasad Pandey. One correspondent said he realised straight away that Jagdish was talking about Babu Pandey, who had been a client of his for some years, and that, after having contacted Babu, he was in a position to confirm that almost all of the details provided by Jagdish Chandra were true.

K Sahay took steps to ensure that as much as possible about the case could be verified before any contact was made with the family in Benares. To this end, he took advice from lawyer colleagues and asked them to witness the statements, while corroborations were handled by correspondence rather than personal contact. He then took his son to Benares to meet the family.

On this occasion Jagdish Chandra made some recognitions of family members, and correctly indicated the way to Babu Pandey’s house through a maze of side-streets, apparently unaided. He pointed out his aunt. On a subsequent day he went to meet Babu Pandey himself, who however did not speak or make any comment.  On this occasion he also visited the Dash Ashwamadh Ghat (bathing pier), which he recognized from a distance; he also recognized a panda there, and appeared as to be very familiar with the place. He declined a betel that was offered him by the panda, saying he could not accept one from a person of lower status to himself. He also recognized other important landmarks.

In 1927, K Sahay published a detailed report of the case as a booklet. In 1961, Professor Ian Stevenson interviewed Jagdish Chandra and members of his family, also members of the family in Benares. Stevenson carried out more interviews in four follow-up visits between 1964 and 1973.

A total of 51 statements by Jagdish Chandra are recorded, of which 36 were written down before verification was attempted, and at least 24 were verified before the two families met; a further 11 could not be verified. Jagdish Chandra, interviewed by Stevenson and in a report written by himself, described additional details that he said he had remembered about the previous life when he was a child. Some of these were subsequently verified.

Many children in such cases make statements sporadically, often in response to an observation or incident. Jagdish Chandra’s memories were triggered by his first sight of an automobile, after which he made most of his statements about the previous life within a few days. Additional memories were stimulated during the visit to Benares. Some memories, for instance that they went swimming in the Ganges daily, and that he wore a loin cloth, were likely, but could not be verified. The most specific memories related to Babu Pandey and his wife, whom Jagdish Chandra called ‘aunt’.

Some of the details included:

Jagdish Chandra demonstrated behaviours that would have been unusual for a child, especially one in a family of the Kayastha caste, but normal for one remembering the life of a Brahmin. For instance he insisted on being allowed to eat before other members of the family (it was the custom to invite Brahmins to start the meal first, and orthodox Brahmins expect such deference when eating with members of other castes). He refused to eat with non-Hindus, or to eat anything that had been prepared by them. He also showed an emphatically hostile attitude towards all men with beards. This would have related to the dislike of Muslims on the part of orthodox Brahmins.

With regard to diet, he was fond of sweets, especially rabri – a favourite of Brahmins and especially of pandas in Benares – and showed an appropriate dislike of salty foods, garlic, onions, eggs and meat.

Jagdish Chandra’s memories were jogged by a single stimulus, of seeing a car. Jai Gopal seems to have been pampered by his father, and made to understand his high station as the son of a senior Brahmin official. Jagdish later said that Jai Gopal’s mother had confirmed to him that whenever the boy wanted to go for a drive, a car was sent for and he was driven around. Jagdish Chandra himself recalled as a small child having had an intense longing for a car, and it was this that seems to have stimulated the flow of memories of the previous life. The attachment to cars persisted into later life.

Jagdish Chandra felt rebuffed and hurt by the lack of interest shown in him by Babu’s family. However he continued to be interested, and visited again when he was 14 (although he did not enter the house or meet anyone) and again when he was 26. By this time Babu Pandey had died, and Babu Pandey’s two wives, of which one was Jai Gopal’s mother, and Jai Gopal’s two younger sisters, welcomed him affectionately. Afterwards he continued to visit the family frequently, and was welcomed.

Babu Pandey proved uncooperative during Jagdish Chandra’s visit to his house. One reason may have been a fear that Jagdish Chandra’s family might use the claim of his being his son reborn to extract money from him. This would have been unlikely, however, as K Sahay was a well-to-do lawyer and considered to be of high moral character. A more likely reason might have been that Jagdish Chandra revealed criminal incidents in Babu’s past. One of these was later described to Stevenson as the murder of a pilgrim for his money and the disposal of the body in a disused well. Babu’s concern would have been compounded by the interest taken in the case by the local magistrate. To have accepted Jagdish’s claim would have been to risk Jagdish Chandra publicly revealing the murder; to refuse to accept it, despite the impressive accuracy of his details, might have invited suspicion leading to further investigation and discovery of the crime.  Hence his decision to remain silent.

Stevenson also learned from the younger sisters of Jai Gopal that Pandey was Jai Gopal’s father as well as theirs, a fact they would presumably have learned from their mother and perhaps from Babu Pandey himself (he died around 1933-4).

Stevenson suggests that the status of Jagdish Chandra’s father, an educated man and a lawyer, argues against an interpretation of this case as a fraudlent contrivance. The fact that K Sahay published details of the case, and allowed colleagues to interrogate his son, before seeking verification would have made the deceit all the harder to maintain. It is difficult also to conceive that a member of the Kayastha caste would drill his child in the habits and manners of Brahmins.

The great distance between the two locations (some 500 kilometers), the separation of the two families by caste, and the close surveillance of Jagdish Chandra as a young child – all argue against the possibility that he might have picked up the detailed information he learned about Babu Pandey and his family without someone being aware of this.

Jagdish Chandra’s elder brother told Stevenson that the boy talked less of the previous life after his first visit to Benares and by the age of seven had stopped speaking spontaneously about it. In follow-up visits by Stevenson, Jagdish himself said that his memories remained clear, and they had not faded.