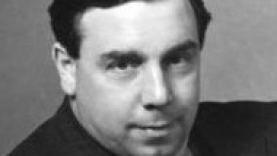 JB Priestley (1894-1984) was an English novelist and playwright. Many of his works were constructed around the concept of time and precognition, topics of particular interest in the domain of psychical research.

John Boynton Priestley was born on 13 September 1894 in Manningham, near Bradford in Yorkshire. He attended Belle Vue Grammar School, leaving at sixteen to work as a junior clerk at a local wool firm. In his spare time he published articles in local and London newspapers.

He was badly wounded fighting in France in 1916 and spent many months in hospital. After the war he attended Trinity College, Cambridge. He subsequently became established as an essayist, critic and novelist. During World War II he achieved national fame broadcasting patriotic sentiments on a regular BBC Sunday evening broadcast.

In 1941 Priestly played an important role organizing and supporting the London Philharmonic Orchestra. After the war he wrote the libretto to The Olympians, an opera by Arthur Bliss. The following year he co-founded the Socialist Common Wealth Party and stood unsuccessfully as an Independent in the 1945 general election. He was a founding member of the Campaign for Nuclear Disarmament in 1958.

Several of his novels and plays were adapted for film and television.

Precognition, Time and the Paranormal

Priestley joined the Society for Psychical Research (SPR) in 1946. He was deeply interested in psychical research, about which he was knowledgeable. He wrote that Phantasms of the Living, a voluminous anthology and analysis by SPR researcher of spontaneous experiences (telepathy, apparitions, precognitions, and the like), was ‘the first and perhaps the best book of its kind.1

In one of a series of studies published in The London Charivari (Punch), Priestley discussed opposing attitudes to the supernatural. He was critical of the belief among scientists that anything that could not be measured deserved to  be ignored,2 and considered total scepticism as ‘stupid bigotry’ and ‘unscientific’.3

Priestley was particularly interested in the research of time and precognition. His three so-called ‘time plays’ – Dangerous Corner (1932), Time and the Conways (1937) and An Inspector Calls (1945) – are based on ideas he first encountered in JW Dunne’s An Experiment with Time. He appealed to viewers of the BBC programme Monitor to write to him about their own precognitive experiences and received more than a thousand replies, publishing the results in his  book Man and Time (1964). Most involved dreams, but some also referred to waking premonitions. He was unable to accept either that time is a phenomenon that immediately passes away or a ‘block universe’ that exists eternally and is perceived as an illusion, so he thought of these rather in terms of the future influencing the past. (The book is discussed in a review in the Journal of Psychical Research by psychologist and parapsychologist John Beloff.4)

In his 1972 book Over the Long High Wall Priestly built further on JW Dunne’s ideas. Again, rejecting the view of the future either as ‘an utter blank’ or ‘already completely there’, he felt that precognitive dreams ‘may bring about an intervention which transforms a rigid fixed future into a malleable one’,5 while emphasizing the absurdity of trying to categorize our unimaginably gigantic, complicated and mysterious universe.

For a detailed catalogue of Priestley’s books and plays see https://jbpriestley.co.uk. His papers can be found at the Harry Ransom Center at the University of Texas at Austin.

The SPR archives held at Cambridge University Library contains a collection of his letters mainly pertaining to psychical research and related matters.

The initial shock (1963) in Margins of the mind: Six studies of the paranormal. The London Charivari (Punch), December.

Peake, A. (2018). Time and The Rose Garden: Encountering the magical in the life and works of J.B. Priestley. Alresford, Hants, UK: O-Books/John Hunt.

Price, K. Testimonies of precognition and encounters with psychiatry in letters to J.B. Priestley (2014). Studies in History and Philosophy of Biological and Biomedical sciences 48, 103-11.

Hawkes, J. (1963). The wandering soul in ‘Margins of the mind: Six studies of the paranormal’. The London Charivari (Punch), 18 December.

Priestley, J.B. (1963). The initial shock in ‘Margins of the mind: Six studies of the paranormal’. The London Charivari (Punch), 4 December.