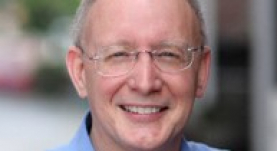 Joe Gallenberger is a clinical psychologist and author based at the Monroe Institute. He is noted for developing PK training programs in Las Vegas casinos. His books include Inner Vegas: Creating Miracles, Abundance and Health, which aims to translate the lessons of casino PK work into recipes for successful living.

Joe Gallenberger was born in 1950, in Menasha, Wisconsin, the son of a printing company executive. He obtained a degree in psychology in 1972 from the University of Memphis and gained a PhD in clinical psychology in 1979 from the same university, with a thesis entitled: A Comparison of Child Abusers with Members of Other Dysfunctional Families.1

Gallenberger is a long-time meditator and has been a PK trainer for 30 years at the Monroe Institute. He is a clinical psychologist with over 30 years experience as a therapist. In 1995, he began exploring psychokinesis after achieving statistically significant results under controlled laboratory conditions. This provided the motivation to develop and teach his PK skills to groups of enthusiasts.

Gallenberger has used this early interest to create programs designed to expand consciousness through his SyncCreation® home study course, and ninety-nine Inner Vegas Adventure Workshops™ which are intended to develop intuition, PK and manifestation skills.

In a 2017 publication in Edgescience, the magazine of the Society for Scientific Exploration, Gallenberger describes his journey from PK lab subject to organizing group PK parties in the casino.2

During his time at the Monroe Institute, he cultivated and tested his own ability to affect physical systems with his mind across several laboratories. This started with successfully influencing the fall of dice (at the Monroe Institute) and later as a volunteer at the Princeton Engineering Anomalies Research (PEAR) Lab. Here he attempted to influence a computer using a random number generator whose output oscillated randomly between zeros and ones, a zero selecting a pixel from the image of a pyramid, and a number one displayed a pixel from the image of a cat, creating a composite image on the screen. The task was to influence the RNG to produce more zeros than ones, creating an image recognisable as a cat.  Gallenberger describes the experiment as follows:

I had meditated and raised energy for a few days before coming to the lab. I sat down and relaxed in front of the screen and then willed the picture of the cat to emerge—nothing happened, just what looked like a mushy static on the screen. I then stood up and got all excited, building energy and looking at the screen, putting my hand out in a beckoning motion and saying “Here, Kitty, Kitty.” The cat picture began to slowly emerge from the mush. The clearer the picture got, the more excited I became, and there it was—a clear picture of the cat, with the pyramid completely gone!

In more recent tests at the Division of Perceptual Sciences (DOPS) at The University of Virginia, Gallenberger directed PK ‘energy’ to a grey box containing sensors whilst wired up to a 128-lead electroencephalogram (EEG) and other physiological monitoring equipment. Testing produced statistically significance evidence of PK and some unusual EEG readings that were correlated with the PK results.

Gallenberger wondered how the PK skills that had been demonstrated in the laboratory could be brought under conscious control, developed, and consistently repeated in a real-world setting, ideally under objective conditions. He needed to find a place to practice that provided random target generation without the possibility of cheating or physical manipulation. The gambling culture of Las Vegas provided such an opportunity: dice in casinos are guaranteed to be random, in order to prevent costly losses. Furthermore, casinos are highly charged and motivating environments for PK expression, in contrast to the sterile ambience of of laboratories.  Gallenberger ran 99 workshops between 1999 and 2020 using dice and slot machines to teach PK, during which time he claims to have witnessed ‘amazing feats of PK, energy healing, and manifestation’.3

Against claims by some parapsychologists that money does not work as a psychokinesis motivator, Gallenberger asserts that in Las Vegas, as long as adequate preparation are done to create the ideal altered state of consciousness, small amounts of money are ‘terrific at bringing attention to a heightened state and providing excellent motivation for sustained PK’.5  Likewise with the belief that combining money with high meditative states is spiritual distraction, ‘we have found that using money helps integrate the spiritual with the physical world’ (again, with proper preparation).6

In Heaven is for Healing: A Soul’s Journey After Suicide, Gallenberger describes his journey contacting his deceased brother using tools learned at the Monroe Institute.7 He describes moving through feelings of devastating loss to positive transformation, and the lessons learned from experiencing afterlife conditions.