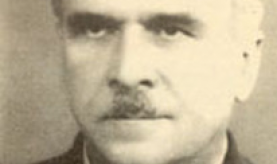 Leonid Vasiliev (1891-1966), a physiologist and parapsychologist at the University of Leningrad, reported numerous successful experiments in ‘mental suggestion’ (telepathy).

Leonid Leonidovich Vasiliev graduated from the University of St Petersburg University in 1914 and carried out research at its department of physiology under Nikolai Evgenievich Vvedensky. In 1917 he contracted tuberculosis and went for treatment to the city of Ufa, where he stayed for four years, teaching biology. He returned in 1921 to St Petersburg (Leningrad from 1924), working both with Vedensky and with Vladimir Bekhterev at the Bekhterev Brain Institute, where he remained as head of the physiology department until 1938.

He was appointed professor of physiology at the University of Leningrad in 1943 and was a corresponding member of the prestigious Soviet Academy of Medical Sciences. He was awarded the Order of Lenin.

In 1921 Vasiliev was invited to work with Vladimir Bekhterev, a neurologist who had been carrying out researches on animal reflexes similar to those of Ivan Pavlov. Bekhterev had been experimenting with ‘mental suggestion’, attempting to influence subjects telepathically, mainly with dogs but also sometimes with human subjects. Conforming with the Soviet regime’s uncompromising materialist ideology, he proposed that telepathy worked by an electromagnetic process. Vasiliev participated in this work and took over its direction on Bekhterev’s death in 1927, attempting to provide greater methodological rigour.

In 1928 Vasiliev visited physiological institutes in Berlin, Kiel, Frankfurt and Paris, where he met Charles Richet, a physiologist and parapsychology experimenter, and also observed experiments by Eugene Osty.1

The research was interrupted by the war and by the unfavourable postwar political climate. In 1960 it resumed with the founding of a parapsychology laboratory at the University of Leningrad, where Vasiliev was now a professor, with the focus on establishing an objective scientific basis for phenomena of mental suggestion.

Vasiliev published two books about parapsychology. Mysterious Phenomena of the Human Psyche (1959) described research in sleep and dreams, hypnosis, suggestion and autosuggestion, telepathy and clairvoyance, including recent Russian researches on 'dermo-optical' reading. An English-language translation of an expanded second edition was published in 1963. Experiments in Mental Suggestion, describing his own experiments, was published in Russia in 1962 and in English translation in 1963.

Vasiliev worked initially with two neurotic patients, referred to as Ivanova and Fedorova.2  In a typical experiment, the subject, in a relaxed state or light trance, responded appropriately to silent suggestions by the experimenter to fall asleep and then to wake. In other experiments, subjects were hypnotized and then given silent (telepathic) commands to perform actions such as lifting a particular limb, picking up a particular object or reproduce a drawing made by the experimenter.

In one experiment a girl dosed with the psychedelic drug mescaline attempted to ‘see’ into sealed boxes whose contents were known neither to her nor to Vasiliev. In ten such tests she achieved two complete and five partial successes.3

Like Bekhterev, Vasiliev initially assumed an underlying physiological process to be at work. He maintained that the processes of psychic functioning and creativity had much in common4 and that telepathy may have been inherited from man’s ‘zoological ancestors, a sort of atavistic throw-back’ or ‘primitive biological radio communication’.5

However, extensive use of complex Faraday cages was found not to inhibit the success of the experiments in any way,6 casting doubt on the electromagnetic theory. Nor was any attenuation with distance found, with the subject separated from the person ‘sending’ instructions by increasing degrees: on different floors of the same building, or in a neighbouring house, or in the street; then in another part of the town; and finally in another city (for instance Sebastapol, 2500 kilometers from St Petersburg).

Vasiliev was one of the first Russian scientists to test the psychic abilities of Nina Kulagina (also known as Nelya Michaelova). Early experiments tested her dermo-optical ability (reading while blindfolded). He also successfully tested her ability to move small objects psychokinetically and deflect a compass needle.7   However, sceptical associates complained that he was allowing himself to be deceived, and he was ordered by the university authorities to cease the experiments.8

Vasiliev’s work became known publicly after he spoke to a gathering of Soviet scientists about the possibility that the US navy was developing ESP as a new secret weapon.9 The publication in 1962 of his book Experiments in Mental Suggestion (reprinted as Experiments in Distant Influence) brought mixed reviews in Russia,  one by a mathematician dismissing parapsychology as superstition.10

An English-language translation the following year attracted interest among Western parapsychologists. A review in the British Journal of the Society for Psychical Research, commended Vasiliev’s focus on a physicalist approach.11  However, there were also complaints of inadequate reporting and methodological weakness.12  Stephen Braude stated that ‘Vasiliev’s experiments are not described in the kind of detail one would expect from a thoroughly scientific publication. Moreover, the long-distance experiments are clearly preliminary in nature and invite various refinements in design, some of which were already planned when Vasiliev wrote his book.’13  Braude added that Vasiliev’s experiments nevertheless deserve attempts at replication.

Eysenck, H.J. and Sargent, C. (1982). Explaining the Unexplained. Mysteries of the Paranormal. London: Weidenfeld and Nicolson.