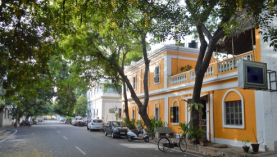 Mallika Aroumougam was approaching four years of age when her past-life memories were triggered by chair cushions she saw in her landlord’s flat, upstairs from her own. In addition to her memories, she exhibited behaviours that convinced her landlord’s wife that she was her deceased sister reborn. Ian Stevenson investigated this rare South Indian case in 1961 and wrote about it in his first book of case reports in 1966. It was persistently criticized for years thereafter; Stevenson responded to the charges but was never able to lay them to rest.

A woman named Kumari Devi Sabapathy died unmarried of typhoid fever at age 28, in 1949. She was survived by a brother and two sisters, one of whom (Srimati) after marriage resided in Pondicherry (now Puducherry), in southern India, where her husband, S Mourougassigamany, was assistant librarian in the municipal library. In July 1956 the Mourougassigamanys decided to rent the ground floor of their house and did so to a couple with a young daughter, Mallika. The Mourougassigamanys continued to reside on the first floor.1

Mallika Aroumougam was born in Madras (Chennai), India, in December 1953, about four years after the death of Devi Sabapathy. After her family moved to Pondicherry, she became strongly attached to Srimati Mourougassigamany but related no memories of a previous life until she went up to the Mourougassigamany’s flat when just shy of four years. On this occasion she noticed embroidered chair cushions and announced that she had made them. In fact, they had been created by Devi. When Srimati replied that they had been fashioned by her late sister, Mallika shook her head and said, ‘That was me!’

Mallika wanted to call Srimati ‘sister’ but Srimati (who did not want to be reminded of her loss) asked to be called ‘aunt’ instead. Mallika visited Srimati as often as she could and remained with her for as long as she could, assisting with her housework. Srimati noticed in Mallika several behaviours reminiscent of Devi. She had a particular way of bathing, distinctive gestures, and a habit of walking in front of other people. She was also precocious in certain activities, such as preparing curries. However, she expressed few additional memories of Devi’s life, and only in relation to things she saw or heard.

When Srimati took Mallika with her to visit her brother, Mallika walked up to two large photographs in the sitting room of his house and said, ‘Here are my mother and father.’ Indeed, they were the parents of Devi and her siblings. She correctly identified another photograph as being of ‘her’ brother and commented, ‘But he is never at home.’ This was true of Devi’s brother, who was often absent, attending to his other property. When she met him, she immediately addressed him as ‘brother’, and became as attached to him as to Srimati.

The Mourougassigamanys had owned a cow to which Devi gave the name Coundavy, after a Hindu princess. Once when Mallika heard someone mention ‘the cow Coundavy’, she remarked, ‘I remember Coundavy and the little puppy who would suckle the cow like a calf.’ Coundavy died before Mallika’s birth, so she could not have observed this herself, but it reminded Srimati and her family of a puppy that had begun to suckle the cow after it bore a calf during Devi’s lifetime.

Srimati’s husband spoke about Mallika at work and her case came to the attention of the head librarian, YR Gaebelé, who described it in the French periodical La Revue Spirite (Gaebelé, 1960, 1961).

Stevenson learned about the case from Gaebelé’s publications and arranged to visit Pondicherry when he was in India in the summer of 1961 on his first tour of investigation. In addition to speaking to Gaebelé, he interviewed Mallika’s father and the Mourougassigamanys regarding Mallika’s statements and behaviours and sought out the family of Devi Sabapathy.

Stevenson included Mallika’s case in Twenty Cases Suggestive of Reincarnation ‘as an illustration of a case with few verifiable details of information, but interesting behavioural features’. He regarded the attachment to Srimati Mourougassigamany as not especially surprising in and of itself; ‘it is rather the degree of this attachment in Mallika and its continuation which falls outside the normal range of such attachments in children for neighbors’ (his italics).

Mallika’s attachment to Devi’s brother was even harder to understand without bringing in reincarnation; her ‘familiarity and affection for him’ was not the expected behaviour of an Indian child towards an older man with whom she had little acquaintance, ‘but entirely appropriate in the behavior of a sister for a brother, which is how she addressed him’.

Stevenson considered the case to be interesting as well in its exemplification of ‘the psychological “law” that recognition is stronger than recall’, because all Mallika’s verbalized memories came in association to stimuli. Had her family not moved into the Mourougassigamanys’s house, it is unlikely that her memories ever would have penetrated into her conscious awareness.2

CTK Chari, a philosopher at Madras Christian College strongly sceptical of the reincarnation interpretation of cases of past-life memory such as Mallika’s, launched an unrelenting attack on the case and Stevenson’s investigation of it.

The lynchpin of Chari’s criticism was the paucity of South Indian reincarnation cases in contrast to ones reported from the northern part of the country.3 For Chari, the rarity of claims of past-life memory in South India was evidence that the cases were the products of cultural invention. He played up the fact that Mallika had only spoken about her memories and displayed behaviours associated with Devi when she was in the company of the Mourougassigamanys, as if these must be misperceptions inspired by personal beliefs.

In a book review of Twenty Cases, Chari quoted a letter from Mallika’s grandfather, who stated that ‘As you surmise, the eccentricity is on the part of those who are publishing these stories’. Mallika’s parents likewise rejected the reincarnation interpretation of Mallika’s statements of behaviours.4 In response, Stevenson pointed out that since Mallika’s father and grandfather had not witnessed anything she had said or done, their opinions were immaterial in judging the case.5 The charge nevertheless was repeated by D Scott Rogo in his book, The Search for Yesterday, and again countered by Stevenson.6

Rogo learned from Chari that Stevenson had used Devi’s brother-in-law, one of his witnesses, as interpreter with another witness, Mallika’s father, without having stated that he had done so. For Rogo, this indicated that Stevenson ‘sometimes deletes important information when writing his reports’ and was suggestive of larger problems with Stevenson’s work. In reply, Stevenson acknowledged that he could have handled the investigation and reporting better, but noted that neither witness was an important one. Srimati and not her husband had been the primary witness to Mallika’s statements and behaviours and Devi’s brother-in-law and Mallika’s father had very minor roles in the case.7

Rather than travelling to Pondicherry to undertake his own investigation, Chari asked a friend, the police inspector-general in Pondicherry, to do so, and this man dispatched a deputy. The deputy contributed the information that the Mourougassigamanys were childless, which Chari implied was a factor in the relationship that developed between Mallika and Srimati.8

The deputy also discovered that Mallika had recognized Devi’s brother-in-law, whom she had not previously met, when she encountered him praying in a temple. Chari was quick to dismiss this recognition, saying, ‘possibly the police report is mistaken. In India, the policeman’s testimony is sometimes no more reliable or final than the psychiatrist’s’.9 Stevenson asked why then Chari had relied on a police investigation rather than making enquiries himself and questioned why he dismissed the report of the recognition on no reasonable basis, apparently only because it counted in favour of the genuineness of the case rather than against it.

Stevenson never portrayed Mallika’s case as a strong one, so the persistent criticisms of Chari and Rogo are striking, all the more so because they are so insubstantial. Rogo admitted of this and his other critiques of Stevenson that they were ‘very trivial’.10 Nevertheless, he and Chari continued to make the same allegations, ignoring Stevenson’s responses to them.11

Chari and Rogo’s comments on Mallika have not had much impact on the larger sceptical community, unlike Chari’s more general – and foundational – arguments about cultural shaping, which are often cited. David Lester, for instance, remarked that Chari had alleged that ‘Stevenson makes no attempt to explain why reincarnation memories are common in some countries, and in some regions of the countries, than in others’.12

Although Stevenson did grapple with this issue on numerous occasions, it is true that he never arrived at a satisfactory understanding of it.13 Despite efforts to find more South Indian cases, his colleague Satwant Pasricha concluded that while South Indian cases of past-life memory closely resemble those reported from northern India and other regions, there do seem to be few cases in South India. The only explanation she could offer was the possibility of local cultural variations affecting the reporting of the cases.14 This remains an unresolved problem in reincarnation studies. However, the issue of regional variance in the number of cases reported is logically separate from the question of whether reincarnation accounts for veridical memories, recognitions and behaviours in cases such as Mallika’s.

Chari, C.T.K. (1967). Reincarnation: New light on an old doctrine. Review of Twenty Cases Suggestive of Reincarnation, by I. Stevenson. International Journal of Parapsychology 9/2, 217-22.

Lester, D. (2005). Is There Life after Death? An Examination of the Empirical Evidence. Jefferson, North Carolina, USA: McFarland.

Rogo, D.S. (1985). The Search for Yesterday: A Critical Examination of the Evidence for Reincarnation. Englewood Cliffs, New Jersey, USA: Prentice-Hall.