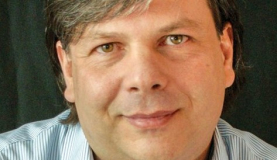 Mark Boccuzzi is a psi researcher based in Arizona. He is lead developer at The Windbridge Institute, which he co-founded in 2008 together with his wife and research partner, Julie Beischel, PhD, and executive director of the Windbridge Research Center, a non-profit organization dedicated to research around survival of consciousness after death. He is also managing editor of the open access, free, peer-reviewed journal Threshold: Journal of Interdisciplinary Consciousness Studies. 1 2

Since 2008, Boccuzzi has been researching modern American, secular, mental mediums. He has co-authored over a dozen peer-reviewed papers, book chapters, and presentations that cover aspects of mediumship, including accuracy, physiology, and the potential therapeutic applications of mediumship readings for the grieving.3

With support from the Parapsychological Association’s Gilbert Roller Fund, Boccuzzi successfully demonstrated the usefulness of thermal imaging technology as a means to document sittings with physical mediums held in extremely low light conditions.4

Boccuzzi carried out a pilot study5 of real-time instrumental transcommunication (ITC), the phenomenon of putative communication with discarnates by means of voices, images or texts appearing in electronic media. Unlike Electronic Voice Phenomena (EVP) where a recording is made first, then voices are heard after the recording is played back at a later time, real-time ITC uses methods that allow operators to ask questions and receive an immediate response, enabling a real-time, interactive exchange. Here, a synthesized voice technique was used.

In this study Boccuzzi attempted to objectively verify interpretations of utterances from sessions carried out with an experienced ITC operator. This intention failed, but novel techniques were introduced, including deployment of a standardized data collection platform which allowed the operator to remotely conduct ITC sessions while ensuring data integrity and adherence to established protocols; use of blinded, randomized listening panels with matched controls; and specially trained speech recognition software to minimize human bias during the interpretation process.

In an innovative experiment, Boccuzzi tested the family dog for evidence of micro-PK using Psyleron’s Sync-TXT app, which texts the user a pre-selected message if the behaviour of a random number generator becomes significantly non-random.  Boccuzzi rated the dog’s behaviour on a scale of 1-7 every time a message was received.  Analysis of results found a significant correlation between the dog’s activity and a measure of the text message’s meaning, done under blinded conditions.6

A study with random number generators (RNG) employed an automated design, in which what counts as a hit is randomly set by the program and a sequence of rules; the experimenter merely starts the experimental run and sets the intention either score high or score low. Four out of five results were significant, correlating quite strongly with Boccuzzi’s high assessment ratings. The study also demonstrated that automated systems and complex levels of experimenter masking may do little to prevent psi experimenter effects.

The second study, conducted at the experimenters’ home, measured the amount of dust particles blocking a laser beam when deceased individuals were asked push airborne particulates into the path of the beam. Significantly low results (psi-missing) were found compared to control periods (p = 0.01). Inspection of the Experimenter Assessment Tool revealed strongly negative ratings on the part of Beischel, who later disclosed an unwillingness to entertain the possibility of a haunted home.

In the third experiment, both operator PK and discarnate influences on the air pressure of a sealed jar were explored, but no significant effects were found in either condition. This correlated with Boccuzzi’s low enthusiasm and desire scores brought on by a general skepticism of the likelihood of success.

For Boccuzzi, these finding reveal the intrinsic difficulty of identifying experimenter psi, even with the advantage of sophisticated research designs. He outlines further research that might break the impasse by registering the experimenter’s attitudes, expectations and intentions, both from self-assessments and the impressions of others – a “360 approach”.

Boccuzzi investigated the possibility of discarnates influencing the output of commercially-available ghost hunting gadgets.8 Following on from previous research, the study design looked for the presence of experimenter psi, through appropriate blinding, and also of unwanted environmental influences, through substantive shielding. Analysis of results revealed statistically significant differences between active and control sessions for one of two discarnates, with respect to two of seven devices (RNG p = 0.038, lighting circuit p = 0.048). This evidence was interpreted as cautiously supporting the discarnate hypothesis over experimenter psi.

Inspired by the recent surge in use of machine learning, Boccuzzi employed machine vision recognition software to classify and extract details from a set of images that were created from random event generator (REG) data (intentional datasets) taken during sessions in which meditators focused on either the concept of love or hate.9  Despite considerable overlap, the software was able to successfully group four of the ﬁve ‘hate’ images. Although exploratory in nature, the results demonstrated the potential value of using machine learning in psi research.

Intentional Datasets as Vectors for Intention

Following up on the ‘love/hate’ data visualization experiments with machine learning, Boccuzzi ran an exploratory study to examine the impact of exposure to intentional datasets on online gamers.10  One hundred and twenty participants were randomly assigned to play one of three versions of a simple online game. The overall gameplay of each version was the same, but various aspects were informed by either the ‘love’ dataset, the ‘hate’ dataset or a new ‘neutral’ dataset. Before and after the game, each player was asked to rate their current level of happiness on a five-point visual scale. Analysis of the pre and post happiness scores showed statistically significant difference between the change percentage for each of the three conditions (p < 0.00001, Kruskal-Wallis test, H(2) = 27.6659). ‘Love’ condition player scores showed increased happiness (p = 0.0034, two-tailed t-test), while those in the ‘hate’ condition showed decreased happiness (p = 0.0004, two-tailed t-test). No difference was found for the pre-post neutral condition scores. A replication is planned.

Boccuzzi questions the ‘one-size-fits-all’ approach in which participants in psi tests are given the same task, regardless of their individual differences, while relying on general principles such as target optimization, participant selection and experimental environment.11 He proposes that optimizing a task according to the cognitive styles and other psychological factors of each participant maximizes the chance of detecting psi, and accordingly is developing psi tests disguised as games that accommodate individual styles.

Boccuzzi, M. (2017). Application of Digital Infrared Thermographic Imaging (DITI) and Other Monitors for Documenting Physical Phenomena during Sittings with a Medium. Threshold: Journal of Interdisciplinary Consciousness Studies 1/2, 37-50. Retrieved from http://tjics.org/index.php/TJICS/article/view/16

Boccuzzi, M. (2018, June). Datasets as vectors for intention: Measuring the impact of intention-entangled datasets on the happiness scores of online gamers. Poster presented at the 37th Annual Meeting of the Society for Scientific Exploration (joint conference with the International Remote Viewing Association). Las Vegas, NV.

Boccuzzi, M. (2019, June). Looking for Psi in All the Wrong Places: Task Optimization in Psi Research. Paper presented at the 38th Annual Meeting of the Society for Scientific Exploration, Boulder, CO.