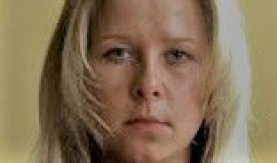 Natalya Nikolayevna Demkina, known as Natasha, is a Russian woman who claimed the ability to view organs and tissues within human bodies, and correctly diagnose diseases, from childhood. Medically trained, she built a busy practice as an adult. She briefly came to the attention of Western media under the nickname ‘X-ray Girl’ and submitted to scientific testing in the US and Japan, with mixed and controversial results.

Natasha Demkina was born in Saransk in the former Soviet Republic of Mordovia in 1987. Her mother described her as an unusually precocious child, learning to talk at six months and recite the works of Alexander Pushkin at one year. By age three she had learned the alphabet.

At ten, Natasha suffered complications after an appendectomy when cotton swabs were left in her abdomen. A month after they were removed in a second operation, she began to say she could see inside people’s bodies. She said she saw in her mother’s torso what looked like a vacuum-cleaner hose, two beans and a tomato; her mother understood this to mean her intestines, kidneys and heart.1

Aged 17, Demkina took part in a documentary filmed by the Discovery Channel, in which she described her ability as follows:

I have two ways of seeing. The first is normal like everyone else, the second kind of vision I call medical vision … like when you open an anatomy book, you see the anatomical structure. If I need to examine a particular organ more closely, let’s say the heart, lung, kidney or liver, I focus more closely on this organ. I can see all the processes at work, for example, circulation of the blood or respiration … There is inside us a spectrum of such bright colours. Not in real life, I’ve never seen such a combination of colours.  You could only perhaps compare it to the sunset.2

For a fraction of a second, I see a colourful picture inside the person and then I start to analyze it.3

She says she is unable to see into her own body, or an object hidden behind a person’s back, nor can she perform at night.4

Demkina’s first visual diagnoses were made on friends of the family. Word of her accuracy spread and sick people who had been unable to obtain cures through conventional medicine began to visit. Soon patients were visiting from all over Russia. Many believed her diagnoses saved their lives.5

The documentary features descriptions by individuals who were impressed by Demkina’s ability. A sceptical journalist, Igor Monichev, tested Demkina by asking which of his arms had been fractured: after a minute and a half, she correctly pointed at his left wrist. A woman whose doctors could find no reason for her being gravely ill expressed gratitude to Demkina for observing cancer cells in the upper third of her left lung and recommending immediate surgery; doctors then carried out a successful operation.

Another patient had been diagnosed with pulmonary tuberculosis and quarantined for a year in the local hospital, his treatment providing no improvement. Scanning his chest, Demkina said his ailment was not tuberculosis, and since she did not know the name for it, she would draw it. Doctors in a Moscow hospital diagnosed the illness as sarcoidosis, which caused lesions that seen through a microscope resembled the drawing (see Figure 1). 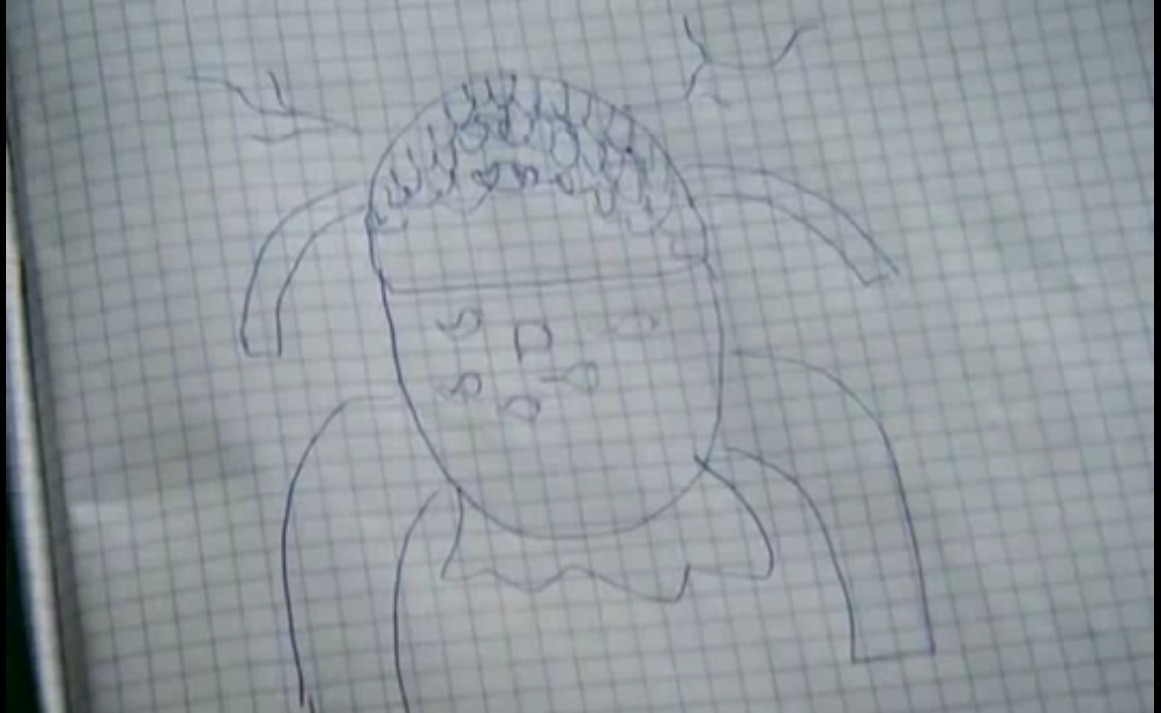 By the age of seventeen, Demkina was seeing twenty patients per evening five evenings a week. At first she asked for donations, then began charging a set amount, to save to pay for medical school and help lift her family out of poverty.6

Demkina’s ability now caught the attention of print and broadcast media throughout Russia. She was tested by doctors in several different clinics and hospitals: among other feats, she correctly identified every diseased organ in a girl with multiple conditions, debunked a mistaken cancer diagnosis, and correctly diagnosed a man’s brain tumour, as confirmed by tomography. Though doctors recognized her gift, none would endorse it publicly or formally.7

Coverage in major Russian media such as Pravda and Izvestia led to international media interest. In January 2004, Demkina was brought to England by the high-circulation tabloid newspaper The Sun. Reporter 36-year-old Briony Warden had been severely injured in a car accident three months before. Still wheelchair-bound, Warden concealed all outwardly visible signs of her injuries before Demkina came into sight. She described the encounter as follows:

[Demkina’s] pupils widened, and it seemed that she had entered [a] trance for a few minutes. At first she began to look at the injured site at the bottom of my back, which she called ‘blocking’. In fact, I have four healing back fractures and slight nerve damage. She described my pelvic region as asymmetric and pointed to the right side – the one where there were several fractures. Pointing to my jaw, she said she saw ‘a hard foreign body’. [The broken bone had been rejoined with a titanium plate.] The most amazing moment was when she saw the damage to my left leg. Actually, both the shin and the tibia – both below the knee – are broken ... I was amazed, as she immediately discerned two separate fractures and said that I had problems with bending the knee joint. Then she reported that she saw ‘traces of several metal pins and screws that left traces on the bones’. She could not know without seeing the scars that two weeks ago my leg was fastened with half a dozen pins and screws.8

Appearing on ITV, Demkina accurately spotted host Fern Britton’s sore ankle.9 However, she also made a mistake, telling the show’s resident doctor, Chris Steele, that things were amiss with his gall bladder and that he had kidney stones and an enlarged liver and pancreas: subsequently a battery of tests showed no abnormalities.10

The Discovery Channel secured the agreement of Demkina and her family to film a test of her ability carried out in New York by the Committee for the Scientific Investigation of Claims of the Paranormal (CSICOP), a group devoted to debunking paranormal claims (now the Center for Skeptical Inquiry, CSI). Demkina explained in the film:

My main goal is that people finally believe my gift exists, so I won’t have to prove it every time to ordinary people or the medically qualified. To be honest, I’m pretty tired of it.

The test was designed by Andrew A Skolnick, an American science and medical journalist, and by American psychologist Ray Hyman and British psychologist Richard Wiseman, well-known sceptics of paranormal phenomena, who supervised the proceedings. The first part of the test allowed Demkina to interact with six patients in her usual manner, speaking with them directly. Five out of six were impressed with her accuracy, including a Russian man with shortness of breath and a weak heart whom she diagnosed as having arrhythmia, and an American woman with a blood circulation problem who commented, ‘she nailed it’.

Hyman and Wiseman were unimpressed, on the grounds that Demkina named the disease only in one case and might have derived information from verbal and unconscious physical cues. They said she suggested many conditions to each patient and was able to choose the correct one from the patient’s positive reactions.11

The investigators ignored this test in their reports, describing only a more formal second test. This involved seven patients, of whom six suffered from health conditions and one did not. Natasha was given six test cards, each describing a target medical condition, in English and Russian, backed up with relevant anatomical drawings. She was required to identify which patient had which condition, with five out of seven correct answers qualifying as a ‘pass’. She correctly identified only four, and the investigators were struck by her failure to identify a large metal plate covering a missing section of skull in a man who had a large brain tumour removed. Accordingly, they said she had failed her test and that her claim did not deserve further study.

Hyman later considered why Demkina was able to correctly identify match the target condition to the individual in four out of seven cases, concluding that ‘inherent and unforeseen limitations’ of the test design meant that she could have picked up clues about the patients’ conditions from their appearance and actions.12

Critics argued that four out of seven correct answers, with a probability of less than 2% of happening by chance, was a strongly significant statistical outcome, meriting a recommendation of further study, or at worst that the test be regarded as inconclusive. Other criticisms of the test was that it exposed Demkina to stress while in a jet-lagged condition, that being rushed and seriously flawed by the investigators’ own admission, it would not have been accepted as a pass even if Demkina had got all the answers correct, and that it was most likely designed to ensure a fail, consistent with CSICOP’s testing practices and objectives.13

In April and September of 2005, Demkina was invited for testing by Tokyo University professor Yoshio Machi, a long-time researcher into unusual human abilities. Here too she was asked to give a diagnosis of seven patients, but this time, she specified that each must have their latest medical record on hand and that it would be limited to either head, torso or limbs. The testing was filmed and shown on Fuji TV. Demkina was able to make an accurate diagnosis for all seven patients, including a knee prosthesis, an early pregnancy, and a rare form of scoliosis with two bends in the spine.

To address the ‘cold reading’ claim – that she picked up clues given unconsciously by patients in response to her suggestions – the researchers also asked Demkina to examine a dog in a veterinary clinic. Demkina initially demurred, protesting that she knew nothing of canine anatomy, but correctly discerned that the dog had a prosthesis implanted in its right hind paw. In a final test Demkina was able to diagnose a person’s condition from a passport photo, correctly identifying liver cancer. At the conclusion she was provided with a document certifying her ability as genuine.14

Demkina graduated high school with highest honours and achieved her goal of winning a place in Moscow University’s prestigious medical school.15 For some time she worked in a center established for her practice and that of other psychic healers, the ‘Special Diagnostic Center of Natalya Demkina’. Its website is now defunct, and the English-speaking world seems to have lost track of her.

Grani.ru (2004). The British are struck by the talent of the X-ray girl, (29 January). [Cited on ‘Special Diagnostic Center of Natalya Demkina’ website, reproduced by the Internet Archive.]

Josephson, B. (2004). Scientists’ unethical use of media for propaganda purposes (28 November). [Webpage.]

Playfair, G.L. (n.d.2). How not to do an experiment: A follow-up to the girl with x-ray eyes. [Webpage, published on the site Skeptical About Skeptics.]

Sample, I. (2004). Visionary or fortune teller? Why scientists find diagnoses of 'x-ray' girl hard to stomach. The Guardian (25 September). 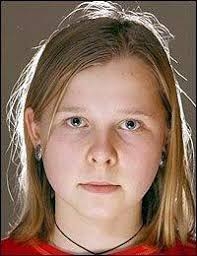