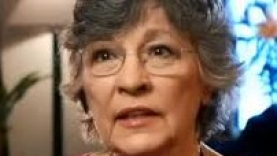 Noreen Renier (b 1937) is an American psychic detective who claims to have worked on more than four hundred cases globally, mainly those related to murder, rape and missing persons. She also claims to be the first psychic ever to work with the American Federal Bureau of Investigation (FBI), and the first to have won a libel lawsuit against a detractor.

Noreen Renier was born on 16 January 1937 in Massachusetts, USA, and grew up near the small town of Turners Falls.1 She describes her young self as ‘a fearless, free-spirited child, something of a tomboy’, participating in sports such as football, basketball and baseball. She also loved to put on plays for other kids and had ambitions to become a movie star.2

Renier writes, ‘I was raised to be skeptical about outlandish claims’. But once her apparent gift emerged, she received encouragement from her mother, while her father revealed that his Lithuanian mother ‘read the cards’ for neighbourhood women).

Renier married in her teens and bore two daughters, Karla and Reené, before reaching the age of twenty, and divorced her husband a few years later.

Renier’s first direct exposure to psychic phenomena was in 1976, while she was employed as public relations director for the Hyatt Hotel in Orlando, Florida. A psychic who wished to rent a lecture room at the hotel performed a mini-reading for her that was accurate.

Soon after, she and her friend Ellen Burns, accepted an invitation to meditate weekly with another friend, whose name she gives as Joanna. During the third session, Renier writes, a sudden ‘surge of energy pulsated through my body’:

I felt as if I had been plugged into an electric circuit and all that electricity was racing through me. My stomach hurt terribly and I cried out from the pain ... A voice that sounded nothing like mine came from my mouth, saying things I had no control over … I could see passing images as the voice spoke…

When she came to herself, Joanna said tearfully that Renier had transmitted a message from Joanna’s grandmother, who had died three years earlier.

Renier and Burns began meeting almost every night to explore Renier’s new ability, which initially expressed itself through psychometry, a type of clairvoyance facilitated by holding a personal object such as a ring or watch. She began giving readings to hotel staff and eventually drew her own customers. Distracted by this from her job, she was fired after three months, but found employment with another hotel as a ‘resident psychic’, giving readings for customers including Saudi Arabian royalty.

Seeking answers, she contacted William Roll, then head of the Psychical Research Foundation, and participated in psychometry experiments. She was also tested on archaeological psychometry by cultural anthropologist David E Jones. Both scientists agreed she was gifted.

Renier’s early career as a psychic included the investigations of a poltergeist case3 and the haunting of a spa. In 1979, she moved to Charlottesville, Virginia, USA, and began lecturing on ESP at the University of Virginia.

According to Renier, when she holds an object associated with a murder or rape, ‘my mind taps into the turbulent energy left behind by a moment of explosive violence and I relive the brutal event’.4 Sometimes it is from the point of view of the victim, sometimes the perpetrator, sometimes an inanimate object (as when she psychically ‘became’ a missing plane she was hired to find), and sometimes an arbitrary location. In her 2008 memoir A Mind For Murder she gives instructions for police or others receiving a reading: they should use her services only when normal investigative techniques have failed, ask her questions in specific non-leading ways, and record all sessions entire.5 She also works with police artists. She estimates her accuracy as 80% when working in person and 70% over the phone.6

Roll writes: ‘Her psychic world is like a collection of perspectives outside her body, any one of which she may occupy to perceive a relevant fact about the past.’ Roll cites the hypothesis proposed by the twentieth century Oxford philosopher HH Price:

Memory is not just a property of living organisms, as we ordinarily think … it, or something essentially like it, is a property of every point of physical space ... from which ‘perspectives’ exist. We could then suggest that these rudimentary ‘place memories’ can on occasion affect human minds telepathically ... This amounts to saying that every point in physical space is the point of view of a rudimentary mind, and that there is a telepathic linkage between these ... sub-minds and ourselves’.7

Shortly after Renier moved to Virginia, she was asked by a victim to help police catch a rapist who was terrorizing a small Virginia town. She visited the homes of two victims and gave details as follows: the perpetrator drove a truck with something that went round and round; he lived in a brick building; evidence of his crimes would be found in his residence; he had a scar on his leg; he would be arrested before Christmas (this was on December 22).8 These details all proved accurate (the truck was for transporting cement).

Media attention generated further cases, and Renier was invited by the FBI Academy in Quantico, Virginia to lecture on psychic detection several times. When an FBI agent asked her to tell President Ronald Reagan’s fortunes in early 1981, she accurately predicted that he would be shot in the upper left chest but survive; the assassination attempt occurred weeks later. Asked by a Secret Service agent if she saw any future danger to the president, she saw a man in a foreign military uniform die in a hail of machine-gun fire; this was erroneous but was apparently prompted by the assassination of Egypt’s president Anwar Sadat, which happened soon after.

In some cases, information provided by Renier proved to have been accurate although it did not help find the perpetrator. This was the case when she was consulted over the Zodiac killer in New York, who would not be caught for another six years: she was correct in her description of his appearance, name, surroundings and even some of his thought processes.

The highest-profile case Renier worked on was the murder of Laci Peterson, who went missing in Modesto, California, USA, in 2002. Renier agreed to work on the case after receiving a call from the victim’s mother-in-law, Jackie Peterson. She used a shoe that had been worn by Laci, sent to her by Laci’s husband Scott Peterson, who was subsequently convicted of the murder. Renier writes that she does not know whether police used her information to solve the case, but her descriptions of Laci’s body being sunk in water in an area known for good fishing and the use of a homemade cement anchor to weigh it down both proved accurate. Scott Peterson was convicted of murder, and sentenced to death.9 He served eighteen years on death row before his sentence was commuted to life imprisonment in 2020, and is currently requesting a new trial based on a claim of jury misconduct. 10

Most of the published criticism of Noreen Renier has been written by Gary Posner, founder of the Tampa Bay Skeptics, which is affiliated with the Committee for Skeptical Inquiry (CSI), formerly the Committee for Scientific Investigation of Claims of the Paranormal (CSICOP).11 Posner contributed an article in the CSI publication Skeptical Inquirer focusing on a single case in which Renier’s readings were apparently entirely erroneous (the article ignored her many successes and implied there were none). Posner also vilifies her for having allegedly exacerbated a bereaved family’s grief.12 A full list of Posner’s work, mostly about Renier, is given here.

Renier has faced determined criticism from John Merrell, a sceptic in the state of Oregon, whose legal battles with her span almost thirty years. Shocked by his father having been ‘taken for a ride by some psychics’ while dying, Merrell pledged to inform the public about psychic fraud.13 In 1986, Renier won $25,000 in a libel suit against him, having established that a letter he wrote denouncing her to newspapers and police departments contained substantial falsehoods.14 To avoid paying, according to Posner, ‘Merrell, after first guaranteeing payment to all of his other creditors, elected to declare bankruptcy’.15 In 2005, Merrell in turn inflicted financial damage on Renier, awarded damages of about $40,000 by another court when, contrary to a settlement agreement that they would not malign each other publicly, Renier denounced him in the first edition of A Mind for Murder, which was recalled by its first publisher after the ruling.16 After Renier declared bankruptcy in her turn, Merrell was able to retrieve $18,500 of this judgement.17

Renier has made many television appearances. She was a regular on Psychic Detectives (Court TV, 2003-2005), and has featured on the Larry King Show, Geraldo, Joan Rivers, Good Morning America, A&E Beyond Chance, A&E Unexplained, and many others. Substantive appearances can be found on her IMDb entry here. Many videos of her TV appearances, lectures and interviews can be found by searching her name on YouTube.