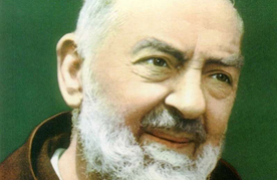 Padre Pio of Pietrelcina (1879-1968) was an Italian Roman Catholic friar and mystic. He became well-known for the phenomenon of 'stigmata', bleeding sores similar to the wounds sustained by Christ at the crucifixion. Levitation, bilocation and other psychic phenomena were also attributed to him.

Padre Pio was born Francesco Forgione on 25 May 1887 in Pietrelcina, Benevento Province, Italy. As a child he was extremely devout and suffered from visions of demonic attack. At five years of age he dedicated his life to God, and the following year he had a vision of the Sacred Heart of Jesus. He was confirmed in 1899, and in 1902 entered the Capuchin Noviate of Morcone on the Province of Benevento.

Padre Pio was ordained as a deacon in 1909 and as a friar in 1910. At about this time he said he experienced the first signs of stigmata, and two years later considered them to be fully present, although as yet not visible to others. He continued to suffer visions of demons, which he interpreted as an attempt by Satan to stop him praying.

In 1915, he was drafted into the Italian Army, from which he was discharged three years later as medically unfit. That same year he experienced a vision of Jesus Christ telling him, ‘I unite you with my passion’, and the stigmata now appeared for the first time. In 1919, doctors examined the them in the presence of a friar. In a later visit, Amerigo Bignami, a medical pathology professor from Rome, bandaged the wounds, but this caused them to bleed more profusely, so the dressings were removed.1 Bignami was sceptical of any religious or paranormal origin, suggesting that once they had become established, the wounds might have been kept open artificially through the continuous use of tincture of iodine.2 This initial scepticism on the part of observers continued with a brief visit in 1920 by Agostino Gemelli, a psychologist.  The encounter was not a success. Padre Pio abruptly dismissed Gemelli, who went on to write a scathing report that referred to the stigmata as ‘fruits of suggestion’3 based on hysteria, and recommended he be admitted to a psychiatric hospital.4 (He later called Padre Pio a psychopath.5) Gemelli admitted that he had not examined the friar physically, and carried out neither a histological nor a neurological examination.6  Late in his life Gemelli acknowledged these failings, a move that helped initiate the process that led to Padre Pio being declared a saint.7

A more careful investigation was initiated by the Holy Office the following year and carried out by Bishop Rafello Rossi of Voltera. The report was generally positive, but forbade Padre Pio to give benedictions or to show the stigmata to anyone. In 1923, accusations regarding the origin of the stigmata were made by Monsignor Pasquale Gagliardi, Archbishop of  Manfredonia, at which the Holy Office forbade Padre Pio to celebrate Mass.  A large popular protest at Benevento Cathedral persuaded it to change its mind, and it recommended instead that Padre Pio be transferred. However, this too met popular opposition, and local Fascists threatened to kill those who gave the orders.

This did not stop the attacks on Padre Pio’s honesty by Gagliardi and others, which continued throughout the following three years. A second order in 1929 to transfer Padre Pio was also delayed by violent popular protests.  In 1931, the ban on Padre Pio’s celebrating Mass and hearing confessions was reinstituted. The former was lifted in 1933, the latter gradually from 1933 onward.  The friar’s popularity continued to increase. He became involved in the construction of a new clinic, the House for the Relief of Suffering, which was completed in 1956.

The attitude of the Church hierarchy continued to be inconsistent. In 1948, Padre Pio heard the confession of the Polish friar, Father Karol Wojtyla, later Pope John Paul II. In 1954, Monsignor Giovanni Batista Montini (later Pope Paul VI) sent a message from Pope Pius XII praising Padre Pio’s ministry. However in 1960, Monsignor Carlo Macarri presented a negative report, which again led to limitations being placed on his celebrating Mass. In 1963, Monsignor Karol Wojtyla asked for Padre Pio’s prayers, shortly before he was appointed Archbishop of Krakow. The following year, Cardinal Ottaviani of the Holy Office finally gave Padre Pio freedom without restrictions to engage in his ministry.

Stigmata have been reported in relation to certain people from the time of St. Francis of Assisi. The most complete account of Padre Pio’s stigmata is found in the report of Bishop Rafello Rossi’s 1921 visit.  Rossi carried out a thorough investigation, interviewing Padre Pio and his colleagues at the monastery, from which he concluded that the friar’s good character and piety were beyond question.

When Rossi examined the stigmata on the hands, he found that blood had apparently seeped through the skin without the skin having broken, at least on the palms; he was not certain at that stage concerning the back of the hands. The sores measured a few centimeters across.9 A few  scabs were present. Upon examining the feet, he found whitish circles, but these were not bleeding. Padre Pio informed Rossi that the flow of blood waxed and waned over time. The wound in Padre Pio’s side, corresponding with the sword wound Christ received at his crucifixion, was triangular and ‘the color of red wine’; other spots were observed also.

Rossi considered four possibilities: internal pathology; an external cause, such as a knife; demonic origin; or a true miracle. Given Padre Pio’s sound character, he ruled out the demonic hypothesis. Nor did he believe the phenomenon was caused by autosuggestion, given Padre Pio’s sound mental state and the resilience he showed in coping with monastic life. Bishop Rossi leaned toward the miraculous explanation, while admitting he could not be certain.

Bishop Rossi confirmed another claim, of pleasant odor similar to that of violets often being sensed in Padre Pio’s presence (he only washed with soap).  The odor was said to come not only from his clothes, but also from his hair.

A third observed phenomenon was Padre Pio’s ability to endure abnormally high body temperatures, continuing to work normally when almost anyone else would have died of a heat stroke. His highest recorded body temperature was 48o C (118.4o F). Measurements on two other occasions were 43o C (109.4o F) and 45o (113o F).10 The Bishop concluded that this must have some supernatural cause, although he declined to speculate whether it was divine in origin.

Padre Pio is one of many saints said to have demonstrated an ability to levitate.11 This is a well-attested phenomenon in hagiography, particularly strong in the case of St Joseph of Cupertino.12 There is some witness testimony with regard to Padre Pio’s levitation, although the phenomenon was not common in his case.

Padre Pio himself claimed to have strong telepathic abilities. He was said to have known the sins of confessors before they came to confession.13 Clairvoyance was also attributed to him.14

The friar said that he had experienced the phenomenon of bilocation (being in two places simultaneously), an occurrence confirmed by witnesses. The most significant instance was summarized by the Italian newspaper Il Messaggero in its 8 November 1999 issue, as follows:

In 1933, the friar from Pietralcina was bilocated in flesh and bones and appeared to Pope Ratti [Pope Pius XI] in the Vatican during an audience with Cardinals Siri and Gasparri. All three saw Padre Pio kneel in front of the Pope. ‘Who showed him in?’ asked Pius XI. The friar bent to kiss his hands and feet and told him: ‘Do not blame this friar’. While he was leaving the room, the Pope told him: ‘Digitus dei est hic.’ [The finger of God is here.] After 2 days, Cardinal Siri went to San Giovanni Rotondo and ascertained the fact that, on the miraculous day, the friar who had been in the Vatican was simultaneously witnessed to be in the village, praying with his fellow-friars.15

Padre Pio said he knew nothing of the process by which these experiences occurred, but noted that they generally occurred while he was praying.

Padre Pio is said to have performed more a thousand miracles during his life. A further thousand are claimed to have been caused by him following his death.16  The first occurred in 1919,  when he allegedly cured a soldier lamed by a battle injury. The best-known claim of this kind relates to a visit in 1962 by Monsignor Karol Wojtyla, the future Pope John Paul II, who urged Padre Pio to try to cure a physician friend, Wanda Poltawska.17 Against expectations, the woman was cured (she attended the 2002 sainthood ceremony for Padre Pio).18 This case is well documented, while others – such as claims that he raised a dead boy to life19 – are less certain, being third party accounts and involving people who cannot be traced.

As is always the case where paranormal claims are concerned, Padre Pio’s honesty was frequently doubted. One informant interviewed by Bishop Rossi said that he had asked her to procure carbolic acid without a prescription, with the implication that he used this to keep his wounds open.  Padre Pio told Rossi that that carbolic acid was used to sterilize syringes.

In his letters to his confessors, Padre Pio had a habit of quoting directly from mystical sources without attribution. However, Sergio Luzzatto notes that close identification with a mystic, to the point of directly quoting from the mystic’s words and making them one’s own, is accepted in the Christian mystical tradition.20

Parapsychologists tend to believe that such phenomena as stigmata are explicable in terms of natural causes. This is the case with Father Herbert Thurston, a Roman Catholic friar and scholar,  and a careful evaluator of claims of extraordinary phenomena.21 Padre Pio’s physical organism, he argued, might have responded appropriately to an intention, whether conscious or unconscious, to exhibit stigmata. Kelly and Grosso compare the large volume of claims and testimony regarding Padre Pio’s phenomena with those attributed to earlier saints in Thurston’s work.22 They note both Thurston’s care as an individual researcher and the high evidential standards of Roman Catholic investigations into alleged miracles.

The philosopher and psi researcher Stephen Braude has pointed out that we do not know the limits of psi, also that certain people with strong psi abilities, such as the nineteenth century mediums DD Home and Eusapia Palladino, could perform remarkable feats of psychokinesis. It therefore makes sense to suppose that such feats as Padre Pio’s are the result of psychic ability rather than a supernatural entity.23

Philosopher Michael Potts has argued that there is no way to determine whether the origin of Padre Pio’s feats is natural or supernatural.  The former would be a more parsimonious explanation: ‘nature’ alone is simpler than ‘God plus nature’.  However, an approach informed by parsimony is vulnerable to competing ideas of the true meaning of ‘parsimony’ - ontological parsimony vs. theoretical elegance; metaphysical parsimony vs. epistemological parsimony - and upon fundamental assumptions about reality.24

Bartcocci, G. & Littlewood, R. (2004). Modern techniques of the supernatural: a syncretism between miraculous healing and the mass media. Social Theory and Health 2, 23.

Braude, S. (1997). The Limits of Influence: Psychokinesis and the Philosophy of Mind. Second edition. Lanham, MD: Rowman and Littlefield.