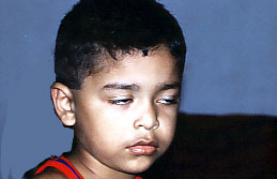 As a two-year-old in Sri Lanka, Pretiba Gunawardana started to talk of a previous life in which he had been a businessman and died of burns when his car caught fire. Investigation by Erlendur Haraldsson two years later failed to identify a deceased individual fitting the child’s statements – as happens in around two thirds of cases in Sri Lanka. In other respects the case is typical: the child started to talk about the memories at an early age, described the former location and occupation, said he died by violence and showed a strong desire to be reunited with the previous family.

The majority of published cases of past-life memory have been verified, but in many other cases – known as 'unsolved' cases1 – it has not been possible to trace a person matching the claimed memories. The case of Pretiba Gunawardana is one such. It was investigated by Erlendur Haraldsson and reported first in a journal paper and later in a book.2

Pretiba was four years and two months old in November 1989 when Haraldsson and his colleague Godwin Samararatne first met him and his mother at their home twenty miles southeast of Colombo. His mother was reluctant to be interviewed, but relented when she was assured that the case would not be publicized in Sri Lanka.

She said that Pretiba made his first statements about his previous life after suffering a week-long high fever when he was a little over two years old. Since then, he frequently spoke about his previous-life memories.

Pretiba was strongly built and healthy looking, and spoke without shyness. He was insistent about the memories of his previous life in Kandy, the main city of central Sri Lanka, which he referred to by its Sinhalese name, Maha Nuwara. He stated that his former name was Santha Megahathenne and he had lived at number 28 Pilagoda Road. His car had caught fire; he was burned on his right leg, hand and mouth; was taken to hospital and ‘came here’ (was reborn).

His mother added that he often mentioned two names: an older brother Samantha and an older sister Seetha. His father later told Haraldsson and Samararatne that Pretiba often said he wanted to see them. According to his mother, he mentioned names more often than he talked about events he recalled.

In total, Pretiba made 42 statements that Haraldsson recorded, many of them referring to names of relatives. Some that seemed likely to be helpful in tracing the previous personality are as follows:

Haraldsson asked Pretiba if he would like to go to Kandy. He was quick to say yes. He said he could find his house, but when asked if he knew its whereabouts in Kandy, said he did not. His father had not been willing to search for the previous person and his mother shared the common fear of Asian mothers that she might lose her child if the previous family were found. Previously Pretiba had told his parents that he wanted to go to Kandy to collect his things.

In Kandy, Haraldsson and Samararatne made enquiries about Pilagoda Road and names resembling it. However, postal service officials told them there was no Pilagoda Road in Kandy, nor any village or area by that name in the Kandy District.

Some Sri Lankans use the name of the village they come from as a family name. Could that be the case here? A village by the name of Megahathenne is situated some fifteen miles from Kandy. Again, enquiries there yielded no information about any person having the characteristics described by Pretiba. No Pilagoda Road was found in the village, nor was the name Megahathenne found in the Kandy telephone directory.

Haraldsson expressed the wish to take the boy with his family to Kandy, and his parents accepted. He and Samararatne made the three-hour drive up the scenic road to Kandy, which leads through many villages and towns. As they were approaching the bridge over the Mahaveli River – on the opposite side to Kandy city – and were driving through a busy street, the boy became quite animated. He spontaneously said, ‘There is Maha Nuwara’ (Sinhalese for Kandy city). As they crossed the bridge over the Mahaveli River – one of a few bridges on the way to Kandy – he correctly remarked, ‘This is Mahaveli Ganga’ (ganga means river). Neither the investigators nor his parents had mentioned this name, nor had any indication been given that they were about to enter Kandy.

The party drove down Peradeniya Road, the main street into Kandy, to the Temple of the Tooth – Kandy’s chief landmark – and around the Lake. Apart from these two statements, Maha Nuwara and Mahaveli Ganga, Pretiba gave no indication that he recognized the area or knew anything about it, nor did he express any wish to see a particular spot, although he clearly enjoyed the journey.

In sum, no person was identified that fit Pretiba’s statements. A search of admission records at Kandy Hospital might have yielded the name Santha Megahathenne, but this proved impracticable, as there were thousands of admissions each year.

The case was publicized in the high circulation newspaper Dinamina and in its English edition, Daily News, with the parents' permission, but without revealing Pretiba’s name. In many cases, such publicity elicits a response from a reader who recognizes the details as matching a particular individual, but that did not happen in this instance, and Pretiba's case remains unsolved. As with many unsolved cases, it is not known why, but it seems likely that he was mistaken in some way.

Cook, E.W., Pasricha, S., Samararatne, G., Maung, W., & Stevenson, I. (1983a). A review and analysis of “unsolved” cases of the reincarnation type. I: Introduction and illustrative case reports. Journal of the American Society for Psychical Research 77, 45-62.

Cook, E.W., Pasricha, S., Samararatne, G., Maung, W., & Stevenson, I. (1983b). A review and analysis of “unsolved” cases of the reincarnation type. II: Comparison of features of solved and unsolved cases. Journal of the American Society for Psychical Research 77, 115-35.