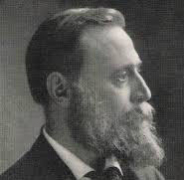 Australian by birth, Richard Hodgson (1855-1905) moved to England and joined the Society of Psychical Research, becoming one of its most active early researchers. He was involved in the investigation of physical (séance) mediums, of whose claims he was sceptical. He devoted most of his later life to the study of the mental (clairvoyant) medium Leonora Piper, which convinced him first of the genuineness of her abilities, and eventually of the reality of survival of death.

Hodgson was born in Melbourne, Australia, on September 24, 1855. He was raised Methodist, but abandoned religious belief at an early age. He studied law, receiving degrees at the University of Melbourne, then moved to England to study moral sciences at St John’s College, Cambridge (following William Wordsworth, whose works he admired). There, he studied under Henry Sidgwick, one of the most influential moral philosophers of the age. After taking honors in 1881, Hodgson taught poetry and philosophy and in 1884 accepted a position at Cambridge as lecturer on the philosophy of Herbert Spencer.

While attending Cambridge, Hodgson joined the Cambridge Society for Psychical Research, where he took an active part in the investigation of mediums, exposing several impostors. In 1882, he became one of the first members of the Society for Psychical Research (SPR) after its founding by Sidgwick and other Cambridge intellectuals. One of his first major assignments was to travel to India to investigate the Theosophical Society and its leaders, including Helena Blavatsky.  After more than four months, Hodgson concluded that Blavatsky was a charlatan and wrote a damning report to that effect. He then turned his attention to the mediumship of William Eglinton, a physical medium known for a procedure in which ‘spirits’ wrote their messages on slates, whose abilities he also doubted; he co-authored reports underlining the fallibility of witness testimony and exposing cheating methods he suspected were used by Eglinton and other slate-writing mediums.

As a result of this and other investigations, Hodgson concluded that ‘nearly all the professional mediums are a gang of vulgar tricksters who are more or less in league with one another.’1

In 1887, Hodgson accepted the position of executive secretary of the American Branch of the SPR, which had been officially organized in January 1885, at a salary of £300 a year, and moved to Boston, Massachusetts.  He served until his death in 1905, the only full-time paid employee of the ASPR and its chief investigator.

Hodgson’s primary assignment was to take over the investigation of Leonora Piper, a Boston trance medium who had been discovered by Professor William James of Harvard University.  Hodgson had heard about Piper before he left London and was confident that he would unmask her. ‘I was compelled to assume in the first instance, that Mrs. Piper was fraudulent and obtained her information previously by ordinary means, such as inquiries by confederates, etc.,’ he wrote.2            .

James arranged for Hodgson’s first (anonymous) sitting with Piper on May 4, 1887. After Piper went into the trance state Dr. Phinuit, her ‘spirit control’, began talking about Hodgson’s family: his mother, father, a deceased brother, a deceased sister, and a deceased cousin named Fred.  Details of Fred’s death during his youth were accurately given.  At a fourth sitting, more information was given about Fred, and mention was made of their schoolmaster in Melbourne. The subject then changed to Hodgson’s first and only love, a woman named ‘Jessie’, although Phinuit could get only the ‘sie’ at the end of her name.  He accurately described Jessie, mentioning a birthmark and a book of poems that Hodgson had once given Jessie, also the fact that he had heard about her death from Jessie’s sister – all confirmed as true by Hodgson.

Although much impressed, and convinced that Piper was not a charlatan, Hodgson, like James, first favored telepathy as the explanation for these feats. As he initially saw it, Phinuit was a ‘secondary personality’ that was buried in Piper’s subconscious and possessed the ability to read the minds of the sitters, even on occasion to tap into minds not present at the sitting, or into some ‘cosmic reservoir’. At this time, Hodgson was not prepared to accept the idea of spirit survival, viewing this as a return to the follies and superstitions of religion, and an impossibility for scholars and scientists.

Hodgson nevertheless wondered how telepathy could explain Piper’s ability to tell him things that pertained to him of which he was as yet unaware. In one sitting, Phinuit informed him that his sister in Australia would soon be giving birth to a fourth child, a boy.  This proved to be true, but Hodgson did not know at this time that his sister was pregnant. He also noted that most of the details mentioned by Phinuit were not things he had been thinking about.

Conversion to Belief in Survival

Hodgson’s attitude began to change in 1892, following the death by accident of George Pellew, a 32-year-old lawyer and journalist an associate member of the ASPR with whom Hodgson had been well acquainted.   Within a month, a new communicator claiming to be the deceased Pellew began communicating regularly in Piper’s sittings, to the extent of taking over from ‘Phinuit’ as the control.   Over a period, these communications proved so detailed and convincing that Hodgson fully embraced the explanation of spirit survival. He wrote:

At the present time I cannot profess to have any doubt but that the chief communicators . . . are veritably the personages they claim to be, that they have survived the change we call death, and that they have directly communicated with us, whom we call living, through Mrs. Piper’s organism.3

Hodgson devoted an average three days a week to studying Piper and considerable time transcribing the shorthand notes from those sittings. However, he did not abandon his strong scepticism with regard to claims concerning physical séance phenomena. In 1895, at the request of the SPR, he returned to Cambridge in England to direct an investigation of the Italian medium Eusapia Palladino. This convinced him and other participants of her essentially fraudulent nature.

Hodgson also investigated cases of out-of-body experiences, possession, apparitions, and multiple personalities.  One involved Dr AS Wiltse, a physician of Skiddy, Kansas, who had a near-death experience – at the time a more-or-less unknown phenomenon - while suffering from typhoid fever.  Wiltse told of emerging from his head, breaking loose from his body and then arising and walking about the house and outside while observing others tending to his ‘dead body’. 4 Another case he investigated was the so-called ‘Watseka Wonder,’ a case of seeming ‘spirit possession’.

is distinguished by a balance of mind almost as rare in its way as Henry Sidgwick’s. He is persuaded of the reality of many of the phenomena called spiritualistic, but he also has uncommon keenness in detecting error; and it is impossible to say in advance whether it will give him more satisfaction to confirm or to smash a given case offered to his examination.5

According to Henry James, the son of William James, Hodgson buried himself in his Charles Street (Boston) apartment, reading and working into the small hours.  Hereward Carrington, another psychical researcher and Hodgson’s close friend, stated that during his last years he would allow no one to enter it, concerned that this would upset the ‘magnetic atmosphere’. According to Carrington, Hodgson had begun receiving direct communications from the spirit controls who had succeeded Phinuit and Pellew (and who had a particularly religious bent).  Hodgson kept this secret, fearing it would affect his standing as an objective researcher.

In a letter to a friend, Hodgson wrote:

It adds a great deal to life, of course, to be assured of the nearness and help of particular discarnate spirits, but, apart from this, there is no necessity for anyone who believes in God doubting the absolute persistence of the moral order throughout the whole of existence.6

Hodgson died on December 20, 1905, of a heart attack after a game of handball. Eight days later a personality claiming Hodgson’s identity communicated through Piper’s hand in a sitting, explaining with difficulty that he was too ‘choked’ to write. These communications became increasingly frequent, ‘Hodgson’ apparently striving to convince sitters who had known him of his continuing existence, and complaining of the obstacles, which he had known of in theory, but now was experiencing at first hand.

I find now difficulties such as a blind man would experience in trying to find his hat. And I am not wholly conscious of my own utterances because they come out automatically, impressed upon the machine (Piper’s body) . . . I impress my thoughts on the machine which registers them at random, and which are at times doubtless difficult to understand.  I understand so much better the modus operandi than I did when I was in your world.7

Hodgson, Richard (1892). A Record of Observations of Certain Phenomena of Trance. Proceedings of The Society for Psychical Research 8.

Hyslop, James (1919). Contact with the Other World. The Century Co., New York