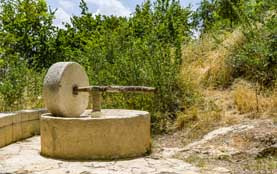 In this 1960 Lebanese reincarnation case investigated by Ian Stevenson, the child experienced most of his memories of the previous life between the ages of eleven and thirteen, not as a preschool child, as is more typical.

Abdallah Abu Hamdan was born around 1877 and lived his entire life in the village of Gharife, Lebanon. He was a pillar of his Druse community, owning considerable property including an olive orchard and an olive-oil press, and serving for about fifteen years as mukhtar, or mayor, of the village. His oldest son was developmentally challenged, and another son and a daughter both suffered from a congenital disease that made them blind and mute. His youngest son, Kemel, emigrated to the USA sometime in the 1920s, and sent money back to his father in Lebanon. Abdallah’s widow Zehna, Kemel and some grandchildren were still living in Gharife when reincarnation research pioneer Ian Stevenson investigated the case. According to the family, Abu Hamdan was not close to his children, and Kemel’s relationship with his father was poor.

Abdallah was a devotee of the Druse religion. He became a sheikh, a person who takes a special religious role in Druse life and lives under certain strictures, including avoiding alcohol and  tobacco. He owned five sacred Druse books which he did not allow to be taken from his house, in accordance with Druse custom.

Three years before his death aged about 65, Abdallah was dismissed from his position as mukhtar for having falsified a document on behalf of the son of a friend, removing a criminal record to help him get a job. At about the same time, he purchased the oil press on credit, and the payments proved more than he could comfortably afford. His widow claimed that anxiety over these matters started the illness that led to his death; his daughter-in-law did not agree that this was the cause, but confirmed that he was stressed.

Abdallah spent some time in a hospital, then was sent home under the care of a physician, who drew fluid from his abdomen once a week. The cause of death was uncertain; the symptoms are those of ascites, which means he might have died either of chronic heart failure or of cirrhosis of the liver, more likely the former owing to his abstinent lifestyle.

The date of death too is uncertain: Stevenson was unable to find a written record, and informants differed. He placed it in February 1942, but notes this could be more than six months off either way.

Suleyman Andary was born on 4 March 1954 in Falougha, which is about thirty kilometers from Gharife. Stevenson first studied the case in March of 1968, when Suleyman was fourteen. He returned a year later to re-interview Suleyman and other informants, and to interview some new ones. He made return visits in March 1970 and March 1972 to follow the case and Suleyman’s development. His final visit was in March 1978, to follow up on Suleyman, now an adult, but in this instance Stevenson could only speak with other informants as Suleyman was away working.

In Falougha, Stevenson interviewed Suleyman and twelve members of his family, all told; in Gharife he interviewed five members of the Hamman family and two friends.  He published the case report in his book Cases of the Reincarnation Type. Vol. III: Twelve Cases in Lebanon and Turkey in 1980.1

Suleyman was raised by his paternal grandmother and two paternal aunts, his father having died when he was two years old. As a small child, Suleyman said he had lived in a village named Gharife, had owned an oil-press and had children. When he was five or six, members of his family heard him muttering names in his sleep one night. When he woke, they repeated the names back to him, and he recognized them as the names of some of his previous children.

When Suleyman was about eleven, his maternal grandmother asked to borrow a religious book, and he sharply refused. Taxed with this rudeness, he said that in his previous life he had never allowed his religious books out of the house.

After this incident, Suleyman made a deliberate effort to recall his previous life. He now remembered that he had been the mukhtar of Gharife, and that his name had been Abdallah Abu Hamdan. It was proposed that he visit Gharife to seek verifications and see if he could recognize places and people. At about the same time a relative mentioned Suleyman’s memories to residents of Gharife, who at once recognized the individual he remembered having been, and urged him to visit. Suleyman was reluctant, but eventually made two visits to Gharife in 1967. The accompanying witnesses were his cousin, and the cousin’s wife, child and son-in-law

By this time, Suleyman was able to name all nine of Abdallah Abu Hamdan’s children, in order of birth. He made one error, saying he had a son named Salim who was blind, when his blind son was Naseeb and Salim was actually his brother. He stated correctly that Abdallah’s son Ahmed had emigrated to the USA, that Abdallah had owned many olive trees and an oil press, that it was located near a water-fountain, and that Abdallah had owned five Druse sacred books. He recalled accurately that Abdallah had died at home, in the arms of a nurse named Badr, more than twenty years before (though actually about 25 years had passed).

In Gharife, Suleyman recognized Abdallah’s son Kemel, the nurse Badr, and an old woman who had been of Abdallah’s generation. Though he correctly remembered Abdallah’s widow’s name, Zehna, he failed to recognize her; Stevenson notes that 25 years had passed and she was much changed. Suleyman recognized the building that housed the oil press, and when asked to name a place near Gharife, named one that was about two kilometers away – not well-known to Gharife residents – and explained how to get there.

In one striking instance the group left Kemel’s house to visit Abdallah’s, but instead of walking along the new paved road, Suleyman took them through a path down a steep hill and through an olive grove. This had been the main road during Abdallah’s life but had sinced been abandoned and now was only faintly visible. However, Suleyman was unable to recognize Abdallah’s house, possibly because it had been substantially renovated.

According to the informants, in Suleyman’s later childhood, if an oil merchant passed by Suleyman would boast of having more and better oil.

Suleyman also showed behaviours suggestive of having lived a past life as an authority. Stevenson was struck by the serious, adult manner he already showed at the age of fourteen. He preferred the company of adults to that of children, and tended to sit in the middle of groups in the manner of an important person. One of the aunts who raised him said that as a child he objected to being treated as one, and would say ‘one does not scold me; I am an adult’. Likewise, he would not submit to discipline by teachers, although he was a well-behaved child. He frequently referred to himself being ‘adult’ or ‘already big’. These behaviours led to him being nicknamed ‘Mukhtar’, which he liked.

And yet Suleyman seemed chronically afflicted by an underlying shame, which as a young child he mentioned but did not explain. Stevenson conjectured that it might have derived from Abdallah’s embarrassing removal from his position, though Suleyman never mentioned remembering this.

Alone in his relatively non-religious family Suleyman took a strong interest in religion, visiting the local religious meeting house and observing religious fasts. He expressed an interest in becoming a sheikh.

On at least two occasions, Suleyman wept on finding out about, or being reminded of, illnesses afflicting Abdallah’s children, including one’s blindness and the other’s lack of speech.

Stevenson was particularly careful to investigate any possible connections between the two families, in view of the fact that Suleyman was nearly a teenager when most of his past life memories emerged. Of twenty informants, the only one who had connections with both Falougha and Gharife was Faiz Halibi, Suleyman’s cousin by marriage.  However, Faiz had lived in Gharife for only a little over a year between 1966 and 1968, before and during Suleyman’s visits to the village and well after Suleyman’s first accurate statements. Faiz was absent when Suleyman remembered the bulk of them. It was unlikely that Faiz would have learned as much about Abdallah as Suleyman remembered, since Abdallah had died 25 years before. Faiz said he had never heard of Abdallah Abu Hamdan until he learned about Suleyman’s statements.

At the age of fourteen, when Stevenson met him, Suleyman’s memories had begun to fade. He seemed somewhat depressed at this time. A year later when Stevenson visited again, Suleyman said he was trying to forget his past life, and seemed cheerier. Stevenson noted that Abdallah’s heavy indebtedness, the embarrassment of his demotion and the unhappy relationships with his children, not to mention Suleyman’s relative poverty by comparison, were all reasons why Suleyman might wish to forget the life.

Suleyman left school at the age of sixteen to apprentice with a blacksmith. He still thought about Gharife, but only a little. On Stevenson’s next visit, when Suleyman was eighteen, he was still blacksmithing and said that he still retained his memories, but remembered nothing new.

On Stevenson’s final visit to Falougha, when Suleyman was 24, he was unable to re-interview Suleyman as he had gone to Saudi Arabia to work as an electrician, so it fell to his relatives to bring Stevenson up to date. Suleyman had mostly stopped speaking of his former life, but a contemporary and friend said that he sometimes mentioned it. About a year prior, he had returned to Lebanon on vacation and the two friends had driven through Gharife more than once. Each time, Suleyman had pointed out Abdallah Abu Hamdan’s house, and at least once he got out and showed his friend the oil press.

According to one of the aunts who had raised Suleyman and his maternal great-uncle, he still had the habit of selecting the most prominent position in a room to sit, and retained both the nickname ‘Mukhtar’ and his liking for being called by it.

Stevenson considered that memories of having been Abdallah Abu Hamdan had an important influence on Suleyman Andary’s development. His childhood situation, being raised fatherless, ‘contrasted painfully’, as Stevenson put it, with his previous position as a respected adult male community leader. Being a child regarded in a relatively trivial light was irksome to him, although he also recognized that to carry on the authoritative behaviour from his previous life would invite ridicule. Mocking use of the ‘Mukhtar’ nickname by people outside his family confirmed these fears.

Stevenson felt that this discordance was likely the root of Suleyman’s shame and depression from childhood to age fourteen, and that it went away at age sixteen due to him having attained some independence and a distinct male role in society as a blacksmith’s apprentice. He continued happy and confident into adulthood, which Stevenson judged as likely due also to the fading of his memories.

Stevenson notes that unpleasant past-life associations were likely the cause of Suleyman’s relative reluctance to speak of his memories, supporting the view of many Asian parents that children should not be encouraged to remember past lives.