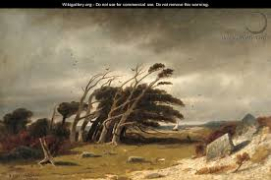 The Thompson Gifford case, documented in the early twentieth century, is considered a rare instance of the ‘obsession’ type. It also belong to a small category of cases where individuals with mediumistic ability channelled high quality artistic productions, despite having hitherto shown no skill or talent for such feats. Unlike such cases, the living Thompson had no knowledge of or interest in mediumship, yet found himself spontaneously driven to produce drawings and paintings in the style of the renowned, and recently deceased, New England landscape painter Robert Swain Gifford. The case was investigated by James Hyslop.

In January 1907, Frederic L Thompson, a New York City goldsmith, appealed for help to James Hyslop, a former teacher of logic and ethics at Columbia University who was now devoting himself to the study of abnormal psychology and psychical research.  Thompson explained that some eighteen months earlier he had been ‘suddenly and inexplicably seized with an impulse to sketch and paint pictures’.1 Prior to that, he had no real interest or experience in art beyond the engraving required in his occupation. The impulses were accompanied by ‘hallucinations or visions’ of trees and landscapes that Thompson associated with Robert Swain Gifford, a renowned landscape painter – to the extent that he felt his mind being taken over by Gifford. At times he would remark to his wife, ‘Gifford wants to sketch’. 2

Gifford died on 13 January, 1905, some six months before the onset of the hallucinations. Thompson had met the painter some years earlier while hunting  in the marshes of New Bedford, Massachusetts; he recalled coming across Gifford sketching on three separate occasions, during one of which the two men spoke for a few minutes. On another occasion he called on Gifford to show him some jewellery. This was the total extent of his contact with Gifford.

In January 1906, Thompson saw advertised an exhibition of Gifford’s paintings at the American Art Galleries in New York City and went to see them. (At this time he was unaware that Gifford had died.)  While looking at a painting, Thompson heard a voice in his ear saying, ‘You see what I have done. Can you not take up and finish my work?’3   Thompson did not know what to make of this. In the following weeks he began to experience an impulse to sketch and paint, that increased in intensity, and to which he eventually succumbed. Over the next year he produced a number of paintings of sufficient artistic merit that he was able to sell them, concealing the Gifford connection from all but his wife. When Thompson showed one of his paintings to an art connoisseur, he was told that it resembled the work of Gifford, even though Thompson made no mention of the Gifford influence.

Hyslop had been studying mediumistic phenomena, and arranged for Thompson sit with a ‘Mrs Rathbun’. Thompson told Hyslop that he did not believe in spiritualism, and even despised it, but he agreed to the sitting, Hyslop accompanying him and taking notes. Mrs Rathbun was told nothing about Thompson or his problem.  She first described someone whom Thompson took to be his grandmother, then told him that there was a man standing behind him who was fond of painting.  She could obtain no name, but Thompson recognized Gifford from her description. Mrs Rathbun went on to describe Gifford’s birthplace and then a group of oak trees, which Thompson recognized as those that he had been visualizing for over a year.  However, no information about the exact location of the scene was given, other than that one had to take a boat to get there, and that it was near the ocean.

Hyslop then arranged a sitting with a trance medium referred to as ‘Mrs. Chenoweth’ (later identified as Minnie Meserve Soule).  Thompson was admitted to the room only after she had gone into a trance.  She quickly established communication with an individual who provided some twenty items of information that closely matched Gifford’s  circumstances and known interests. These references included: a fondness for rugs, a preference for rich and flesh colors, a tarpaulin that Gifford frequently wore, his sudden death, his unfinished work, and the condition of his studio. Eventually the medium referred to a group of oak trees, and Thompson asked if he could be given their location. The information was much the same as that obtained through Mrs Rathbun, but with some extra details:

When you go up here on this hill, as I told you about, an ocean in front of you, it will be to your left, and you will go down a little incline, almost a gulley, and then up a little bit and jut out … They look like gnarled old trees.  There is one that stands up quite straight, and some roots that you can see, not dead but part dead ...4

Thompson thought the scene might be at Nonquitt, Massachusetts, where Gifford had a summer home accessible only by boat.  He went there and found several of the scenes he had seen in his visions, however not the gnarled oak trees.  He then approached Gifford’s widow, who told him that the artist’s favorite place had been one of the Elizabeth Islands; she also showed him round Gifford’s old studio, where he was shocked to see three paintings almost identical to those he had sketched during his ‘hallucinations’ (one was of a man leading a team of oxen).

Thompson then travelled to the Elizabeth Islands and found the gnarled oak trees on the  island of Nashawena, a place he had never been.  He immediately painted the scene.  On this visit he also found several other scenes that he had previously sketched or painted from mental images.  While viewing one of these scenes, he heard a voice similar to the one he had heard at the art gallery say, 'Go and look on the other side of the tree'.5  There he found Gifford’s initials carved in the bark of a beech tree, and dated 1902.  Two months later Thompson revisited the location accompanied by Hyslop, who concluded that the initials were too old and weathered to have been recently carved by Thompson as some kind of trick.

In April 1908, Hyslop arranged another sitting with Mrs Rathbun.  This produced more relevant information about Gifford, including references to his work, also mention of the Latin words ‘alter ego’ as the influence that was affecting Thompson, a detail that was repeated at a subsequent sitting with Mrs Chenoweth. At this later sitting, ‘Gifford’ offered more evidential information, referring to his interest in ‘scraggly and gnarled oaks’, also to a studio he had created in the loft of a barn that smelled of hay, whose existence Hyslop later confirmed with Mrs Gifford.  At this sitting, ‘Gifford’ was asked if he was in fact influencing Thompson, and whether he was aware of what he had  ‘impressed’ upon Thompson’s mind.  ‘Gifford’ replied that he certainly was aware of it and indeed had recently tried to project a misty day on the old road in the marshes (Thompson confirmed that he had been haunted by just such a scene).

Until now, Gifford’s name had never been mentioned. On a visit to a third medium, ‘Mrs Smead’ (Mrs Willis M Cleaveland), among many references to Gifford’s work, the initials RSG (Robert Swain Gifford) were obtained.

In his analysis of the case, Hyslop considered the possibility that Thompson might have fabricated the account, having made the sketches that he claimed were based on mental images while visiting the actual locations. However, Hyslop saw no motive for such a charade; he also considered it certain that Thompson had previously possessed none of the artistic accomplishments required to fake this level of expertise. Hyslop also considered that the sittings with the three mediums, which Hyslop, not Thompson, had arranged and observed, provided a degree of independent corroboration. If Thompson had been faking, why should veridical information concerning Gifford come through the mediums?

An alternative paranormal interpretation is that the mediums were picking up details about Gifford from Thompson’s mind. Hyslop argued against this, commenting that, ‘Superficially, at least, all the facts point to the spiritistic hypothesis, whatever perplexities exist in regard to the modus operandi of the agencies effecting the result.’6