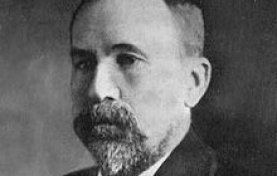 James Hervey Hyslop (1854-1920) was a professor of philosophy, a psychologist, and, during the last fifteen years of his life, a dedicated psychical researcher. In 1904, he organized the American Institute for Scientific Research, which was to be devoted to the study of abnormal psychology and psychical research.  This incorporated the American Branch of the Society for Psychical Research (ASPR), following the death of its head Richard Hodgson in 1905. At this time, Hyslop dropped the study of abnormal psychology in order to focus solely on psychical research. The ASPR was then reorganized and operated independently of the English SPR. Hyslop moved from the Christian fundamentalism of his youth, to agnosticism  during his college years, to seeker of truth and scientific observer during his teaching years, and finally, during his research years, to believer in a spirit world and the survival of human personality after death

Hyslop was born in Xenia, Ohio, USA, and grew up on a farm in that township. His parents belonged to a fundamentalist Presbyterian church and raised their children in accordance with its ultraconservative teachings – teachings which Hyslop began to rebel against during his university years.  He earned his BA at Wooster College in Ohio in 1877,  then studied at the University of Leipzig from 1882 to 1884, before receiving his Ph.D. from Johns Hopkins University in 1887 and his LL.D. from University of Wooster in 1902.  He taught philosophy at Lake Forest University, Smith College, and Bucknell University, then joined the faculty of Columbia University in 1895 where he taught logic and ethics. He authored three textbooks, Elements of Logic (1892), Elements of Ethics (1895), and Problems of Philosophy (1905).

A sitting with the Boston medium Leonora Piper, arranged by Harvard professor William James in 1892, sparked Hyslop’s interest in psychical research. During the course of further sittings with Piper over a number of years, beginning in 1898, he became intrigued with the subject, reporting that his father, wife, brother, and other deceased members of his family all communicated with him through Piper.  Many facts were given that he considered well beyond the explanations of prior research by the medium, cold reading, chance guessing, or of telepathy between himself and Piper, not least as he was unaware of them himself until he checked with other family members.

In reaching this conclusion, Hyslop reasoned as follows: Piper had not known his identity when he first visited her, but even if this had been the case, she would have had to employ a private investigator to dig up obscure facts in a town nearly a thousand miles from where she lived, at a time when travel and communications were slow and relatively expensive. She would further have had to assume that none of Hyslop’s relatives would mention to him that a private investigator had been asking questions about the names of horses, nicknames, church disputes, and other trivial matters. The investigator would also have had to gain detailed knowledge of private conversations Hyslop had held with his father, now deceased.

While some discounted mediumistic messages because of their triviality, Hyslop pointed out that the most trivial were usually the most evidential. He reported a communication from his wife Mary, who had died in 1900, in which she recalled a humorous incident that occurred when they were caught in a thunderstorm, an incident he clearly recalled, along with other memories that he shared with her, and which were clearly beyond the reach of of background research.1

Hyslop became an active member of the ASPR, working closely with Hodgson, and was also elected as a vice-president of the English SPR in 1899.   At Columbia, some of his colleagues were outraged at Hyslop’s interest in ‘spiritualist nonsense’, one of them, James McKeen Cattell, protesting to the university’s president.  On one occasion, Hyslop responded by noting the efforts being made to find a species of fish that would support Darwin’s theory of evolution, and asking, ‘why it is so noble and respectable to find whence man came, and so suspicious and dishonorable to ask and ascertain whither he goes’.2

Weakened by tuberculosis, Hyslop resigned his teaching position at Columbia in 1902 and joined a gold-mining company in Vermont, hoping that his health would improve with less stress and an outdoors environment. Within a year or so, his health improved; however, having achieved very little success in the gold-mining venture, he returned to New York City, where he supported himself with some inheritance money and occasional writing jobs, as well as by assisting Hodgson in investigations for the ASPR.  After Hodgson’s death, he reorganized the ASPR and continued studying Piper, along with other prominent American mediums. Of these, the main ones were Minnie Meserve Soule (‘Mrs Chenoweth’) and Mrs Willis M Cleaveland (‘Mrs Smead’).  He served as executive secretary and treasurer of the ASPR until his death in 1920, contributing much of the contents of the ASPR journal while also authoring many books on psychical research, including  Science and a Future Life (1905), Enigmas of  Psychic Research (1906), Borderland of Psychic Research (1906), Psychic Research and the Resurrection (1908), Psychic Research and Survival (1913), Life After Death (1918) and Contact with the Other World (1919).

One of the more interesting cases investigated by Hyslop was that of ‘Doris’, an apparent case of multiple personalities.  He concluded that ‘spirit obsession’ was the underlying cause:

William James and other researchers hypothesized that an alter ego or ‘secondary personality’ emerged from the medium’s subconscious during the trance, then took control of the medium’s body and accessed information telepathically, before feeding it back to the sitter. Hyslop did not accept such an explanation. Earlier, Richard Hodgson and become sceptical of the secondary personality school of thought, and this was further elucidated by Hyslop.  As both researchers came to view the matter, most discarnates are unable to communicate directly through an earthly medium and therefore require a ‘medium’ on their side also.  Known in spiritualist parlance as a spirit ‘control’, this entity receives messages from the communicating spirit and relays them through the earthly medium’s entranced body.  The control receives the original message by thought images, which he/she needed to interpret and put into words – what Hyslop called the ‘pictographic’ method. This, Hyslop believed, explained the so-called ‘fishing’ for information by Piper that bothered James and other researchers.  From this point of view, it was not Piper who was attempting to narrow things down by questioning the sitter -  fishing for answers - but the control who was struggling to interpret what the spirit communicator was trying to get across, a process that often resulted in misinterpretations and wrong information.

James and other researchers sought a ‘scientific’ explanation for mediumistic phenomena, one that  that excluded spirits.  In addition to the secondary personality hypothesis, they believed that the phenomenon might also be explained by mind reading or thought-transference (as telepathy was known at this time).  By contrast Hyslop, along with Hodgson, Oliver Lodge and some other researchers, concluded that simple telepathy was ruled out by cases where facts were given that were unknown to the sitter, but were later verified as true.

Anticipating the hypothesis now known as super-ESP or super-psi, James hypothesized the operation of  ‘cosmic telepathy’, a more-or-less boundless source of information - a ‘cosmic reservoir - to which the ‘secondary personality’ has access, feeding back information to the sitter in a conversational manner. However, Hyslop felt that there was no adequate scientific evidence for such a theory, and that it was largely less incredible than the existence of spirits. He wrote:

If thoughts are deposited in the ether or in the cosmic reservoir and are directly legible by mediumistic minds, why this selectiveness to simulate or impersonate the discarnate? Why does not the mind of the medium represent an inextricable confusion of myriads of thoughts deposited from all sorts of people and superposed upon deposits of whole generations of human beings? Had Professor James no sense of humor on this point?  Could credulity stretch itself farther?  It is the finite selectiveness of the facts which you have to explain, especially when that is accompanied by phonetic confusions just as we would expect them in any spiritistic efforts to transmit thought through an organism having phonetic difficulties like the phonograph.4

The strength of Hyslop’s survivalist convictions made him the target of frequent attacks. He wrote:

The neglect or hostility which the subject receives is one of the curious problems of psychology.  If a new engine for an aeroplane is announced the inventor is acclaimed a benefactor of the world.  If some new substance to take the place of gasoline is discovered, all the capitalists in the country tumble over each other to get the control of it.  A new element in chemistry is announced with all the fervor of a miracle.  Anything that will fill the human belly with the husks that the swine do eat, is considered the greatest thing in the world.  But if a man offers evidence that he has a soul and that he may expect to live after death, he is called insane, though he may prove the prolongation of consciousness, which is the one aspiration of every effort a man makes in life!  No better indication of the utter materialism of the age could be adduced . . . and yet the belief in immortality is the keystone to the arch of history, or the pivotal point about which move the intellectual, the ethical, and the political forces of all time.5

Following his death in 1920, Hyslop purportedly began communicating through a number of mediums. The evidence for this was gathered by Gertrude O Tubby, who had served Hyslop as secretary of the ASPR for many years.  She compiled her research in a 1929 book titled James H. Hyslop – X.  She concluded:

That far-seeing mind that chose to place its ripe experience in psychology, logic, and philosophy at the service of psychic investigation, without money and without price, and gave, in terms of earthly years, half of its maturity to an exhaustive and intensive laboratory investigation of psychic mediumship, most appropriately has contributed more than any other single individual, save possibly that other great pioneer, Frederic Myers, to the posthumous enlargement of our concepts of life and death.6

Hodgson, Richard (June 1892) A Record of Observations of Certain Phenomena of Trance, Proceedings of The Society for Psychical Research

Hyslop, James (1919) Contact with the Other World, The Century Co., New York