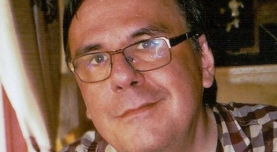 Titus Rivas is a Dutch theoretical psychologist, who works as an independent researcher, author and teacher with a particular focus on parapsychology. He has written books and papers about evidential aspects of near-death experiences and past life memories.

Titus Rivas graduated from Rijksuniversiteit Utrecht in 1996 having gained qualifications in systematic philosophy from the University of Amsterdam in 1994. He helped establish the Athanasia Foundation in 1996, where he also acts as treasurer. Besides parapsychology, Rivas’s interests include ethical veganism, philosophy of mind, animal psychology, psychopathology, and social issues. He is a columnist for Para Visie, and contributes regularly to the Dutch Journal of Parapsychology and other outlets concerned with animal freedom and veganism.

In The Self Does Not Die: Verified Paranormal Phenomena from Near-Death Experiences,1 Rivas and co-authors argue against the sceptical claim that near-death experiences are at best elaborate hallucinations produced by a dying brain, if not merely the exuberant fantasies of attention-seeking narcissists. The book gives details of more than a hundred reliable first-hand accounts by individuals who reported otherworldly experiences while clinically dead (producing a flat EEG response), interviewing them directly rather than relying on second-hand sources. The main criterion for including a case was that it include a direct personal statement by a third party, someone other than the experiencer, either recorded or written, confirming the anomalous aspect. The authors focus in particular on descriptions of paranormal perceptions that occurred from an out-of-body perspective during the initial stage, arguing that these constitute a large body of evidence supporting the veracity of such perceptions, contradicting materialist explanations.

Rivas, Dirven and Smit draw attention to the value of veridical out of body experiences in which details of conversations, operating procedures and objects that are well outside the normal visual range are described in significant detail. Few such cases have been carefully researched. They examine an account by cardiac surgeon Lloyd W Rudy,2 in which a patient whose eyes were taped shut, and whose EEG became flat, later gave a highly detailed account of veridical out-of-body perceptions; they exhaustively interviewed all those concerned and found corroborating evidence among similar testimonies. Rivas and Smit conclude, ‘We believe that the accumulation of such anecdotal evidence is making it increasingly difficult to dismiss this type of case out of hand'.3

Prominent NDE skeptic Gerald Woerlee has argued that brain injuries and diseases reveal the close dependence of consciousness on brain function and are therefore evidence for physical reductionism.4 Rivas agrees that the impact on the individual of disease and injury is readily apparent, but counters that this can also be accounted for by a dualistic ontology, in which  the manifestation of a soul or non-material self may be inhibited by brain disease and injury, yet still exist. He cites the phenomenon of terminal lucidity, the surprising return of clear cognition to dementia patients minutes before their decease, also cases of  significant brain abnormalities where the consequences predicted by standard neuroscience are absent, as evidence against materialist views of consciousness, along with the difficulty of explaining how non-material experience arises from physical substrates.5

In 2008, Smit published an article6 describing an out-of-body experience in which the experient, unconscious and hypothermic for several hours after being found in a meadow, was transferred to hospital, during which time his dentures were removed by a male nurse. Days later the patient recognized the nurse and discussed the incident with him, despite having been deeply unconscious at the time the dentures were removed.

Woerlee claimed that the patient might nevertheless have heard all these details in conversation by hospital staff and pieced them together during the (illusory) out-of-body state. Rivas and Smit point out that the man was deeply unconscious before his resuscitation when all these details – including the lost dentures – were registered to have occurred, concluding that Woerlee is wrong in his skeptical assertions and casting doubt on the materialistic assumptions of his arguments.7

Since the 1980s, Rivas has carried out his own reincarnation research in the tradition of the late Ian Stevenson of the University of Virginia. Together with colleagues on behalf of the Athanasia Foundation, notably Anny Dirven, he studied Dutch cases of the reincarnation type, especially in young children. He was also involved in the investigation of an international case of apparent xenoglossy, as part of an SPR team together with the late Mary Rose Barrington and Peter Mulacz.8 Rivas co-authored a book about reincarnation research, Reincarnation as a Scientific Concept, with Dr Kirti Swaroop Rawat.9

Rivas and co-authors detail cases of ostensible pre-existence memories in (mostly Western) child cases.10 Non-externally validated cases are culled from the website prebirthmemories.com: One woman recalls her birth experience with details such as the coldness of the scales and her father’s conversation with a nurse, which her father confirmed when she started to talk about them aged four.

Externally validated cases carry more weight. Rivas and his co-authors also describe cases such as that of James Leininger, who as an infant expressed spontaneous memories of an American World War II fighter pilot killed in action; most of these utterances were verified as correct by his father, as documented by Jim B Tucker at the University of Virginia.11 The authors discuss the respective merits of ‘living agent psi’ and ‘discarnate consciousness’ arguments, drawing on some of the 22 strong cases in which pre-birth testimonies are consistent with NDE accounts. An example is Celal Kapan, a Turkish boy who described the death of his former personality in terms similar to NDE accounts, including having observed the ambulance carrying his body from an elevated out-of-body perspective. The authors argue that such cases tend to favour the view that consciousness is irreducible and can act independent of brain function, supporting the ‘discarnate’ narrative.

Rivas, T., & Smit, R.H. (2013). A near-death experience with veridical perception described by a famous heart surgeon and confirmed by his assistant surgeon. Journal of Near-Death Studies 31, 179-86.