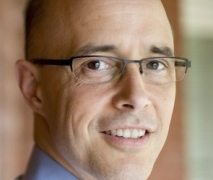 Psychiatrist Jim B Tucker is director of the Division of Perceptual Studies, a section within the University of Virginia (UVA) medical school’s psychiatry department. Tucker is known for his investigations of children's memories of past lives, continuing the work of pioneering reincarnation researcher Ian Stevenson, a previous holder of the role. He has published three books and numerous papers on the topic, and made many media appearances discussing reincarnation cases.

Jim B Tucker, MD, was born in Goldsboro, North Carolina, USA, on 1 January 1960.1  He graduated Phi Beta Kappa with a BA degree in psychology in 1982, and completed his MD training in 1986, both at the University of North Carolina–Chapel Hill. He then took post-graduate training in general psychiatry and child psychiatry at UVA, becoming board certified in both in 1992. He stayed in the town of Charlottesville to begin a successful psychiatric practice.2

Raised Southern Baptist, Tucker, in his own words, ‘had never seriously considered the possibility of past lives before reading one of Dr Stevenson’s books',3 specifically Ian Stevenson’s popularization of his own investigations, Children Who Remember Previous Lives: A Question of Reincarnation.4  Tucker was intrigued both by the children’s reports of their memories and the possibility of studying them in a systematic and objective fashion, by verifying them through official records and witness interviews. He contacted Stevenson at the Division of Perceptual Studies (DOPS) to express his interest, and began working there half-time in 1999 as an assistant professor, before giving up his psychiatric practice entirely the following year to work full-time at the University of Virginia. On Stevenson’s retirement in 2002, Tucker took over the reincarnation studies. He became director of DOPS in 2014 when Bruce Greyson, who had succeeded Stevenson as director, himself retired.

Currently Tucker serves at UVA as Bonner-Lowry Professor of Psychiatry and Neurobehavioral Sciences and director of DOPS, where he and the DOPS research team continue investigating along the same lines as Stevenson, but with an emphasis on American cases. He oversees the ongoing computerization of the 2,500 cases recorded by Stevenson and other researchers, using Stevenson’s protocols.

Tucker and his wife have four children.

Tucker investigated the case of James Leininger, probably the most notable childhood reincarnation case in recent times. In early childhood, James had frequent nightmares of being trapped in a burning plane after being shot down near Iwo Jima. He said the plane had been based on a ship named ‘Natoma’. This and numerous other details he remembered were found to match the life of James Huston Jr, an American pilot killed in action in March 1945, and he was also able to recognize some of his former comrades in arms, giving their names.

After James’s parents wrote a best-selling book based on his father’s investigations,6 Tucker published an informal account of the case as a chapter in his 2013 book Return to Life: Extraordinary Cases of Children Who Remember Past Lives, followed by a formal case report in 2016.7 Tucker was able to prove that James had made the statements about his past life before the previous identity of James Huston was revealed by James’s father, ruling out contamination as an explanation, through retaining a copy of video of the boy speaking made for a documentary that was never completed. Tucker also convincingly ruled out other alternative explanations such as fraud, coincidence and fantasy.8

Gender and Past Lives

Tucker and co-authors investigated the relationship between gender identity and past-life recall, analyzing 469 cases. It was found that children who remembered an opposite sex previous life were far more likely to exhibit gender non-conforming behaviours than children who reported past life personalities of the same sex, suggesting an influence on gender identity from past-life memories.9  The conclusions of this work are complicated by an investigation of a boy from Thailand who was considered by family members to be the reincarnation of his maternal grandmother on the basis of a supposedly shared birthmark. The boy subsequently demonstrated cross-gender behaviour. This raised the possibility of influence of family and community expectations on gender identity development that may masquerade as past life influences in some cases.10

Review of Prior Work

Tucker reviewed childhood cases dating from 1963 to 2008, finding that in describing a recent past life the child would usually give sufficient detail to enable a matching deceased individual to be identified. Such cases occur around the world, including countries that have no cultural belief in reincarnation.11

Tucker also reviewed Stevenson’s early work with young children, documented in his book Twenty Cases Suggestive of Reincarnation.12 This consisted of detailed case reports with lengthy tables that included every statement the child had made about a previous life. Stevenson continued to publish papers and books, including the two-volume, 2,200-page work Reincarnation and Biology: A Contribution to the Etiology of Birthmarks and Birth Defects (1997)13 that included accounts of congenital birth anomalies closely matching aspects of the circumstances of the death or life of the previous personality. Stevenson was also interested in children’s behavioural correspondences with previous incarnations or their circumstances. Tucker has continued many of these lines of inquiry in his own work.14

In 2013, Tucker collaborated with reincarnation researcher Antonia Mills on a chapter reviewing the reincarnation evidence in Varieties of Anomalous Experience: Examining the Scientific Evidence, published by the American Psychological Association.15

Cases with Written Records Made Prior to Verification

In collaboration with parapsychologist Jürgen Keil, Tucker published a paper about a case in which the investigator recorded notes of a child’s statements in Turkey, finding that they corresponded in great detail to the life of a man who had lived in Istanbul 850 kilometres away and had died fifty years before the child was born. Tucker and Keil then reviewed three cases of Stevenson’s in which written records of the child’s statements were made prior to identification of the previous incarnation, and no contact between families was made, effectively ruling out any possibility of the child’s testimony being contaminated by contact between his family and the previous incarnation’s family.16

The biological correlational work of Stevenson has been independently replicated.  Keil and reincarnation researcher Satwant Pasricha have investigated many Asian cases which have provided strong evidence of past-life matches between past-life injuries remembered by the subjects, and current-life birthmarks or birth defects, using post-mortem and police records to verify the memories. Tucker has done likewise in the USA. Pasricha, Keil, Tucker and Stevenson collaborated on a 2005 paper showing several sample cases of this type, demonstrating that they happen in widespread cultures whether their belief systems embrace reincarnation or not.17

In search of a quantitative tool for measuring the evidential strength of reincarnation cases, Tucker created a ‘strength of case scale’ (SOCS) and tested it by correlating each of its measures with all the others in 799 cases.  His analyses revealed a positive correlation between strength of case and the economic status of the child’s family, but not social status or caste. Strength of case did not correlate with the initial attitudes of the child’s parents towards the case but did correlate with an early onset of statements about the previous life, degree of emotion shown by the child while speaking about their previous life, and facial resemblance to the previous incarnation. Tucker concluded that SOCS is a valid tool for measuring the evidential strength of cases and that the patterns of correlations it reveals are more suggestive of a paranormal (ie reincarnational) explanation than a normal explanation for the cases.18

In 2004, medical student Poonam Sharma and Tucker collaborated in a discussion of intermission memories, based on case reports in which young children described memories of the time between incarnations. These children tend to recall more details from the previous life than those children who do not have intermission memories.  The co-authors’ breakdown of 35 Burmese cases suggests intermission memories can be resolved universally into three stages: a transitional stage from life to afterlife in which the deceased might witness their own funerals or try futilely to speak with relatives; a stable stage spent in a particular location; and a return stage that involves selection of the next-life family, including following future parents and entering the mother’s body. Evidentially, a comparison between Asian intermission memories and the transcendental aspects of Western near-death experiences reveals a broad phenomenological overlap, suggesting a common underlying core reality to both experiences.19

Theory of Life and Afterlife as Shared Dreams

In 2014, Tucker published a paper in which, drawing on quantum theory, he proposed a model of consciousness, life and reincarnation as shared dreams, that is, possibilities created by the mind that only become fact by being observed. ‘We think of our minds existing in this world, but it’s actually the world that exists in our minds’, he writes. ‘My thinking about death has changed. I no longer imagine that we go to another place when we die. Instead, we have another dream’.20

Tucker has written three books on reincarnation, all intended to make the case for its reality as a genuine natural phenomenon to popular audiences.

Life Before Life: A Scientific Investigation of Children’s Memories of Previous Lives (2005) recounts the work of Stevenson and other reincarnation researchers, including Tucker himself, and presents some of their strongest cases, which apparently defy any explanation other than reincarnation. Tucker details the investigative method and alternate explanations, then addresses features of cases such as verifiable statements, behavioural correspondences, recognitions and birthmarks, giving example cases for each.

Return to Life: Extraordinary Cases of Children Who Remember Past Lives (2013) presents cases that Tucker himself investigated, including James Leininger and Cameron Macauley, who had apparent strongly-emotional past-life memories of living on a remote island in the Outer Hebrides, but whose remembered facts could not be matched with records well enough to make a firm identification of the previous incarnation. The cases include two apparent reincarnations of prominent Americans: ‘Hunter’, a child prodigy of golf who recalled a previous life as the 1920s American golf great Bobby Jones, and ‘Lee', who had memories suggesting he had previously been Sydney Coe Howard, who wrote the screenplay for the iconic film Gone With the Wind.

Before: Children's Memories of Previous Lives (2021), his most recent book, is a reprinting of both Life Before Life and Return to Life in a single volume, along with a new Introduction and a list of twenty reading group questions.

Tucker has written two articles for the Psi Encyclopedia on reincarnation-related topics: Past Life Memories Research and Birthmarks in Reincarnation Cases.

More than was the case with Ian Stevenson, Tucker has used television to share reincarnation research with the public, collaborating with documentary-makers and giving interviews for TV and print media. He has appeared on Good Morning America, Larry King Live, CBS Sunday Morning and the Dr. Oz Show. The media page on Tucker’s website contains documentary and interview clips about the case of Sam Taylor (chapter seven of Life Before Life), the case of Cameron Macauley and the topic of reincarnation-related birthmarks. In an another clip, Tucker discusses the history of the research, its main features and possible explanations.

Keil, H.H.J., & Tucker, J.B. (2005). Children who claim to remember previous lives: Cases with written records made before the previous personality was identified. Journal of Scientific Exploration 19/1, 91-101.

Stevenson, I. (1966). Twenty cases suggestive of reincarnation. Proceedings of the American Society for Psychical Research 26.

Stevenson, I. (1997). Reincarnation and Biology: A Contribution to the Etiology of Birthmarks and Birth Defects (2 vols). Westport, Connecticut, USA: Praeger.

Tucker, J.B. (2000). A scale to measure the strength of children’s claims of previous lives: Methodology and initial findings. Journal of Scientific Exploration 14/4, 571-81.