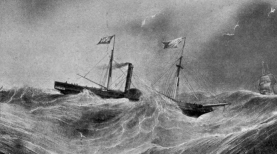 The 1860s Wilmot case is the one of the best-known of its kind in the psychical research literature, a reciprocal experience in which the apparition of a living woman was perceived by two people, and both in turn were perceived by the woman herself.  The case has been frequently cited, and although not unique, has been the focus of more than the usual amount of controversy.

The term ‘apparition’ is used in psi research for what are popularly called ghosts. An apparition differs from a hallucination in that it represents a real person. A ‘reciprocal apparition’ is one in which corresponding accounts are given by both the percipient (the person who sees it) and the agent (the person whose apparition is seen). It may include an out-of-body experience. Such accounts have been reported by agents and percipients, experienced both in the waking state and while dreaming. Although reciprocal apparitions have a single agent, there may be multiple percipients. (See Reciprocal Apparitions)

Mr Wilmot corrected and approved the following account, written by a friend who then sent it to the American Branch of the Society for Psychical Research (SPR) in December 1889. The case was investigated by Richard Hodgson through correspondence and first published by Eleanor Sidgwick in the Proceedings of the Society for Psychical Research in 1891.1

On October 3rd, 1863, I sailed from Liverpool for New York …. On the evening of the second day out, soon after leaving Kinsale Head, a severe storm began, which lasted for nine days ….

Upon the night following the eighth day of the storm the tempest moderated a little, and for the first time since leaving port I enjoyed refreshing sleep. Toward morning I dreamed I saw my wife, whom I had left in the United States, come to the door of my state-room, clad in her night-dress. At the door she seemed to discover that I was not the only occupant of the room, hesitated a little, then advanced to my side, stooped down and kissed me, and gently caressing me for a few moments, quietly withdrew.

Upon waking I was surprised to see my fellow passenger [Mr Tait], whose birth was above mine, but not directly over it—owing to the fact that our room was at the stern of the vessel—leaning upon his elbow , and looking fixedly at me. ‘You’re a pretty fellow,’ said he at length, ‘to have a lady come to visit you in that way.’ I pressed him for an explanation, which he at first declined to give, but at length related what he had seen while wide awake, lying in his birth. It exactly corresponded to my dream. …

The day after landing I went by rail to Watertown, Conn., where my children and wife had been for some time, visiting her parents. Almost her first question, when we were alone together, was, ‘Did you receive a visit from me a week ago Tuesday?’ ‘A visit from you?’ said I, ‘we were more than a thousand miles at sea.’ ‘I know it,’ she replied, ‘but it seemed to me that I visited you.’ ‘It would be impossible,’ said I. ‘Tell me what makes you think so.’

My wife than told me that on account of the severity of the weather and the reported loss of the Africa, which sailed for Boston on the same day that we left Liverpool for New York, and had gone ashore at Cape Race, she had been extremely anxious about me. On the night previous, the same night when, as mentioned above, the storm had just begun to abate, she had lain awake for a long time thinking about me, and about four o’clock in the morning it seemed to her that she went out to seek me. Crossing the wide and stormy sea, she came at length to a low, black steamship, whose side she went up, and then descending into the cabin, passed through it into the stern until she came to my state-room. ‘Tell me,’ said she, ‘do they ever have state rooms like the one I saw, where the upper birth extends further back than the under one? A man was in the upper berth, looking right at me, and for a moment I was afraid to go in, but soon I went up to the side of your berth, bent down and kissed you, and embraced you, and then went away.’

The description given by my wife of the steamship was correct in all particulars, though she had never seen it.2

In the style of SPR investigations, Hodgson confirmed the dates the steamship sailed from Liverpool and arrived in New York, the weather on the voyage, and other details. He wrote to the Wilmots as well as to Mr Wilmot’s sister Eliza, who had been in a different stateroom on the same boat, to get their direct testimony. Tait unfortunately was deceased by the time the case came to Hodgson’s attention.

In keeping with the theoretical position advanced by Edmund Gurney in Phantasms of the Living, Eleanor Sidgwick proposed that Mrs Wilmot was the telepathic agent for her husband, setting off this chain of experiences. The telepathic rapport between the Wilmots allowed Mrs Wilmot to become clairvoyantly aware of the stateroom so that she could describe it accurately. Mr Wilmot in turn sent a telepathic transmission to Mr Tait, which his mind projected as an apparition in the room.3

GNM Tyrrell, a physicist and leading commentator on the subject of apparitions, agreed with this assessment in general, but added

I should not say that Mrs Wilmot’s experience of voyaging across the sea to her husband’s ship and finding her way to his cabin, etc., was just a telepathic message sent by her to him. I would rather say that it was an apparitional drama constructed by the [subliminal] mid-levels of both their personalities working in collaboration. Also, I would not say that Mr Wilmot’s experience, which was the result of a second apparitional drama, constructed in a similar way, spread to Mr Tait by ‘infection’. I would say that Mr Tait was drawn into the scene because his presence in the cabin rendered him relevant as a spectator. 4

Another commentator, the philosopher CD Broad, wondered whether the figure seen by Tait might in fact have been Eliza Wilmot, sleepwalking. The principal telepathic connection might have been between Mrs Wilmot and Eliza.5 Broad does not appear to have been especially attached to this idea, however, and observed that in reciprocal apparition cases, the telepathic theory ‘is much less plausible as an account of the experiences of the person whose apparition is ostensibly seen than as an account of the experiences of those who ostensibly see it.’6

Michael Murphy, co-founder of the Esalen Institute in Big Sur, California, speculated that this might be an instance of bilocation, the appearance of a person in two locations simultaneously.7

On the other hand, in an earlier analysis, FWH Myers, a co-founder of the Society for Psychical Research, favoured an ‘excursive’ interpretation, according to which Mrs Wilmot’s consciousness actually left her body and travelled to her husband’s stateroom on the ship, where she viewed the room. Although the room was presented to her mind in visual terms, she would not have seen it through her eyes, but clairvoyantly. Her presence would have created a ‘phantasmogenic centre’, the focal point for the apparitions perceived in a dream by her husband and the waking state by Tait.8

Myers’s excursive interpretation has been favoured by the majority of authorities who have written about the case.9

Susan Blackmore, a psychologist and leading sceptic of parapsychology, refers to Myers’s account of the case rather than Sidgwick’s original one, since this includes the more significant supporting correspondence collected by Hodgson. She says:

This story sounds very convincing until you look a little further. It is now not possible to talk to the people concerned, of course, and I have found that there are no passenger lists or plans of the ship in existence. However, just reading the reports raises a host of questions. The whole story depends on the coincidence of Mr. Wilmot’s and his companion’s visions with the experience of Mrs. Wilmot. However, we are told all three sides of the coincidence by none other than Mr. Wilmot himself, and he had been suffering from days of seasickness and sleeplessness at the time. That reduces its value, but worse still is that Mrs. Wilmot never reported having had an OBE at all. Mr. Wilmot reported that she was worried and seemed to go out to seek him. But in her own report she only alludes briefly to her "dream," and she gives no description of what she saw. She says she thinks she told her mother about it the next morning, but there is no report from her mother. By the time the case was written up in 1889, the roommate was dead and unable to give his account. It seems to me that this case does not bear close scrutiny.10

Sceptical philosopher Paul Edwards claims that the details of Mrs Wilmot’s ‘supposed corroboration’ all come from Mr Wilmot. He states that ‘at no stage’ did Mrs Wilmot confirm details of her husband’s account of her flying over the ocean, entering his stateroom and kissing him, seeing Tate and the arrangement of the berths.11 This is literally true, but ignores the implied consent in her letter to Hodgson, and her statement that, although she could no longer recall the details of Tait’s appearance, ‘I distinctly remember that I felt much disturbed at his presence, as he leaned over, looking at us’ in their affectionate embrace.12 Edwards is misleading also when he states in a footnote that ‘Professor Broad speculated that the person seen by Tait was Miss Wilmot who may have entered the stateroom while she was in a daze’.13 Broad suggested that Eliza might have sleepwalked into the stateroom and been mistaken for Mrs Wilmot, but in his later discussion,14 it is clear that he does not take this as a serious proposal.

More recently, Robert Charman has gone over the case and reached the conclusion that everything could be explained in naturalistic terms if another woman passenger in her nightdress happened to enter the stateroom in error. Because he has been able to think of a natural explanation for the events, he holds that the appeal to a paranormal explanation is unwarranted.

Stevenson, I. (1982). The contribution of apparitions to the evidence for survival. Journal of the American Society for Psychical Research 76, 341-58.