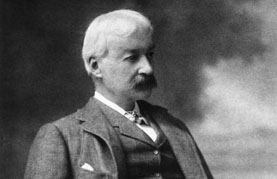 Andrew Lang (1844-1912) was a prolific writer in the fields of folklore, anthropology and psychical research. He is noted for having drawn attention to strong parallels between psi phenomena as studied by contemporary researchers – poltergeists, apparitions, clairvoyance, and the like – and similar reports from historical times and in diverse cultures all over the world. His best known work in psi research is Cock Lane and Common-Sense (1894).

Andrew Lang was born at Selkirk, Scotland in 1844, and at an early age became steeped in local literature and legends. He attended the Edinburgh Academy, St. Andrew's University, Balliol College, Oxford and then Merton College on an open Fellowship. In 1875, he married Leonora Blanche Alleyne and moved to London, where he worked as a journalist. Leonora helped him with the editing of his famous series of fairy tales collectively known as The Rainbow Fairy Books, which were published in twelve lavishly-illustrated volumes.

From this period he contributed articles on a wide range of subjects to popular magazines such as The Daily Post and Cornhill Magazine, eventually becoming editor of Longman’s Magazine. During his life he published a total of forty-nine books of poetry, fiction and non-fiction. Many of the latter were quite substantial, and covered topics in literature, history and historical biography and anthropology; they included two works of psychical research. In a biographical article psychical researcher Alan Gauld writes:

Specialists in the various fields which Lang entered could not dismiss him as an amateur. Some specialists, indeed, disliked and feared him. His erudition and his irony were formidable weapons, and he dearly loved to demolish the follies and pretensions of persons misled by their own learning and self-conceit. His most deserving victim was, I think, Sir James Frazer, the anthropologist. It is a tribute to Sir Frazer’s literary power that The Golden Bough has survived Lang's merciless analysis.1

Lang’s interest in anthropology deepened in the 1870s, as he became preoccupied with the close similarities between folk tales of societies scattered around the world.  He was a co-founder of the Folklore Society in 1878, one a group of  ‘anthropological folklorists’ influenced by EB Tylor, concerned with the large-scale collection and comparison of customs, superstitions myths and practices.

Lang’s interest in folklore and anthropology eventually led him to take an interest in the new scientific endeavour of psychical research.  During his life he was honoured with two doctorates and the Gifford Lectureship at St Andrews.

Lang’s interest in folklore and anthropology led him to follow closely the activities of psychical researchers from the 1880s. Gauld writes:

[S]pook stories were a recurrent element in the border legends he had loved as a child, and in the poems and novels of Sir Walter Scott, which he had devoured almost as soon as he could read. Like Scott, he dearly loved a story of the supernatural; and, like Scott again, he perhaps, took certain of these stories a little more seriously than he was willing to admit...

Lang's interest in psychical research merged, especially in his later years, with a general liking for mysteries, puzzles, secrets, things hidden or far-off or difficult to unravel. He writes at considerable—sometimes unjustified—length upon such topics as the Man in the Iron Mask, the Casket letters, the Homeric question, the Appin murder, and other historical, psychical, archaeological, literary and anthropological enigmas. His liking for mysteries merged in turn into a deeply engrained feeling that a universe in which everything was explained, or at any rate explicable, in which there remained no unknowns, no arcana, no hints of problems still to be resolved, would be a bleak and boring place.2

Lang was particularly interested in such phenomena as scrying, dowsing, clairvoyance, death-wraiths, spectral lights, immunity to fire, object-movements, phantom hands, hauntings, spirit possession, poltergeists, trance, possession, bilocation, and out-of-the-body experiences – all of which he wrote about in a well-received book Cock Lane and Common-Sense (1894).3 He believed that it was important to study such things, even if some examples could eventually be attributed to trickery or natural causes.

Lang was struck by the fact that such experiences occurred throughout different societies that had no contact with each other. He felt that the SPR unduly neglected such events and sought to redress the balance through his many articles and reports. For instance he analysed the case of Joan of Arc, viewing her ‘hearing of voices’ as a genuinely paranormal phenomenon.4 He also undertook a detailed study of poltergeist incidents, directly challenging the view held by a fellow-SPR member and sceptical commentator, Frank Podmore, that such events could always be attributed to trickery or unreliable memory. In this work he re-visited the historical cases of the ‘Drummer of Tedworth’, the ‘Epworth Case’, ‘Willington Mill’ and ‘Cideville’5 and drew parallels between such poltergeist manifestations with the belief in shamanic societies that gods and spirits could enter people and objects.

Lang urged his SPR colleagues to look more closely at historical and anthropological parallels for the psychic phenomena they studied. For instance he was struck by the similarity between the ‘cabinet’ utilized by nineteenth century mediums such as Eusapia Palladino and the ‘medicine lodge’ of the native American shaman, as described by Jesuit Missionaries in the seventeenth century, which appeared in both cases to give rise to the sensation of cold breezes.

Lang publicly stated his belief in telepathy and hoped that many beliefs that were generally unacceptable to science would be scientifically recognized by future generations.6 His only experimental work was his investigation of scrying or crystal gazing.7 Although he was unable ever to see visions himself by this means, he documented those of others during his experiments. He considered them in the main hallucinatory, but conceded that in one case, a woman referred to as ‘Miss Angus’ (real name Fyfe), the visions accurately described matters of which she had no knowledge. Lang also contributed an article on ‘crystal gazing’ in the 11th edition of the Encyclopaedia Britannica in 1910.

Lang was particularly interested in apparitions, and contributed a detailed article on the subject to the Encyclopaedia Britannica in 1875 and future editions. He largely followed Edmund Gurney, the main author of the SPR’s two-volume Phantasms of the Living, in maintaining that crisis apparitions – those that coincided with the death or a crisis in the affairs of the appearing person – were hallucinations generated by telepathy, a belief which he expounded in his books and numerous articles.8

Lang believed that some psi phenomena could be viewed as evidence of survival. However, he argued that some religious miracles could be explained in terms of psi phenomena.9  Likewise, and along with some of his SPR colleagues, he believed that the ‘spirit communicators’ of the American trance medium Leonora Piper could be viewed as secondary personalities, and the veridical information they provided to sitters as gained by telepathy, aided in some cases by muscle-reading.10

Lang, A., Teverson, A., Warwick, A. and Wilson, L. (2015). The Edinburgh Critical Edition of the Selected Writings of Andrew Lang.  Edinburgh: Edinburgh University Press.