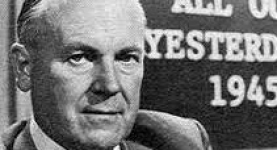 Brian Inglis (1916-1993) was an Irish journalist, author and broadcaster, best known in the UK as presenter of Granada Television’s historical series All Our Yesterdays.  His many published works include books about alternative medicine and psychical research.

Brian St John Inglis was born on 31 July 1916 in Dublin, Ireland. His father was Sir Claude Cavendish Inglis, a hydraulic engineer; his mother was Lady Vera Inglis (née Blood). He attended school in Shrewsbury, then Trinity College, Dublin and Magdalen College, Oxford. He was awarded a PhD in history after having served in the RAF Coastal Command during World War II.

In 1954 Inglis joined The Spectator, first as assistant editor, then editor, turning it into ‘by far the most lively and readable of the weekly papers’ and championing progressive social causes.1 In 1962 he began a new career in television, presenting the long-running programmes What the Papers Say and All Our Yesterdays. He died in 1993.

For the last 20 years, Inglis had taken an interest in, as he entitled one of his books, ‘Science and Parascience’, including extra-sensory perception, homeopathic medicine and spontaneous combustion. This got him into furious rows in the correspondence columns with scientists of a traditional nature. However, Inglis never became obsessed with such matters and seldom introduced them into his conversation with friends, which was always gossipy and amusing.2

Inglis was an active member of the Society for Psychical Research contributing reviews and comment to its journal.   He presented the ITV three-part series ‘Margins of the Mind’ in 1968, a documentary investigation of dowsing, spiritual healing and telepathy. His publications about the paranormal described coincidence, dreams, trance, altered states of mind, clairvoyance, precognition and especially alternate types of healing; also, early research of spirit mediums.   Of particular note is his two-volume history of the scientific research of the paranormal, Natural and Supernatural (covering antiquity to 1914) and Science and Parascience (1915-1939), a well-researched survey of the development of scientific approaches to anomalous phenomena.

Plans to bring the subject up-to-date in a third volume were interrupted by his death.3

Together with Arthur Koestler and Tony Bloomfield, Inglis co-created the KIB foundation, the forerunner to the Koestler Parapsychology Unit based at the University of Edinburgh.

Natural and Supernatural: A History of the Paranormal from Earliest Times to 1914 (1977). London: Hodder & Stoughton.

Coincidence: A Matter of Chance or Synchronicity (1990). London: Hutchinson.

Correspondence: Dowsing and electromagnetic waves (1970). Journal of the Society for Psychical Research 45, 257-78.

Parapsychology and Contemporary Science by A.P. Dubrov and V.N. Pushkin (1983). Journal of the Society for Psychical Research 52, 149-50.

The Encyclopedia of Occultism and Parapsychology by L. Shepard (1986). Journal of the Society for Psychical Research 55, 398-99.