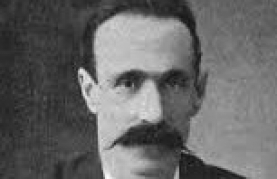 Charles Bailey (1870-1947) was an Australian medium known for an ability to produce ‘apports’ of great variety. Investigations provide some support for his genuineness, but he was also often caught in dubious circumstances.

Charles Beasmore Bailey was born in 1870 in Melbourne and raised as a Methodist. As an eighteen-year-old shoe-maker’s apprentice he attended his first séance, and having been told that he himself possessed mediumistic talents, was persuaded to become a part-time professional medium. What may have been his first apport appeared at this time: a stone dripping with sea water said to have been conveyed directly from the ocean.1  Bailey was paid for this activity, a welcome addition to his otherwise meagre earnings.

During a séance in 1898, his ‘spirit-control’ concurred with a sitter about an ailment that the sitter complained of, which the sitter had in fact made up. He was a police officer, who subsequently had him prosecuted and fined for fraud.

In the 1890s he was noticed by a wealthy American businessman, Thomas Welton Stanford, whose brother had founded Stanford University in California. Welton, a devoted Spiritualist, donated a large sum of money to establish psychical research at the university. In 1902, Bailey held a séance at Stanford’s home and impressed him with abundant ‘showers’ of metal falling from the ceiling in the darkened room.2 For twelve years thereafter he gave regular séances under Stanford’s patronage; these were documented and later given to Stanford University, along with the apports that had been produced at the time. Much of the collection was destroyed by an earthquake in 1906.

Bailey’s ‘spirit controls’ were said to include ‘Dr Robinson’ (a deceased theological literary academic)3 and other deceased scholars. Their discourses entertained sitters, but it was the apports that caused special interest. These included:

Clay tablets and cylinders also appeared, inscribed with what looked like ancient Babylonian inscriptions.4 In 1905, a sample of these was submitted to the British Museum, which judged them to be forgeries.5 This did not diminish Bailey’s standing with his audiences, many of whom agreed with the assessment of Sir Arthur Conan Doyle that the spirits had created the objects themselves rather than disturb archeological sites.6

Harbinger of Light, an Australian spiritualist magazine, gave increasing prominence to Bailey’s apports and published photographs of them. In 1903, Bailey agreed to a request by Dr Charles MacCarthy from Sydney to submit to investigation. This was carried out in a room and with sitters chosen by MacCarthy. Bailey was searched and enclosed in a canvas bag with only his head and hands protruding. In the first sitting there were no apports. In subsequent sittings, fifty-four articles were apported, including ‘some inscribed clay tablets, small birds, coins, semi-precious stones, an Arabic newspaper, a crab, and a small barely alive shark’.7 Similar objects continued to appear even after Bailey was sealed behind a curtain of mosquito netting, including a three-foot long leopard-skin rug.8

Further tests were carried out by AW Dobbie, a member of the British Society for Psychical Research, with inconclusive results. Tests in Adelaide produced only small apports.

In 1904, Bailey travelled to Italy at the invitation of the Milan Society for Psychical Studies; reports of his activities were subsequently published in the journal Luce e Ombra, and translated and published in Australia.9 Bailey now insisted on complete darkness and refused to undress for searches. Attempts to impose controls by tying him up had to be abandoned  because of violent gestures and manoeuvres he made during the séances.

In 1906, he again left Melbourne and went on tour throughout Europe and London, continuing to hold sittings under Stanford’s patronage. In one particularly dramatic séance in 1908, Bailey was said to transform his clothing into a Mandarin costume and speak in  what appeared to be perfectly articulated Chinese.10

A damaging exposure occurred in Grenoble when Albert de Rochas, a French psychical researcher, visited a market where song birds were sold, to try to identify certain live birds that Bailey had supposedly apported. The seller identified Bailey as the person who had bought them from him earlier.

In 1911, Bailey arrived in London to give private sittings (for a fee) and finally agreed to test séances under the supervision of the psychical researchers Everard Feilding and William Wortley Baggally, and the conjurer William Marriott. Bailey refused to be ‘surgically’ searched; the sacking he had been enclosed in was found to have a small hole in it and to contain some bird feathers, raising suspicions that birds had been earlier placed there. Baggally later concluded that Bailey hid his ‘apports’ in his clothing.11

Bailey left London for Scotland where, at the invitation of James Coates, he undertook private sittings, for which he was well paid.12

Further embarrassments followed Bailey’s return to Australia. In one case, a slate reading trick failed to work; in another, he was accused of faking apparitions. By this time Bailey had broken with Stanford and was being threatened with an investigation by Dr John Coover, a psychical researcher at Stanford University, aimed at exposing him. Bailey left the country and returned to Scotland.

Bailey may have worked in England under the name of PS Mills-Tanner, although this is uncertain.13  By 1920 he was back in Australia, having won support from Sir Arthur Conan Doyle, but now took little part in spiritualist circles. He married aged seventy-six, died the following year and was cremated in Sydney.

Bailey has been acclaimed by some as the world’s greatest apport medium’ and as ‘the greatest medium of this age’,14 and by others as an innovative and successful faker.15

Sceptics pointed to weak controls and other conditions that could have enabled him to deceive audiences and investigators:

Supporters argue the number, size and nature of many of the objects that appeared in investigative séances in controlled conditions would have been extremely challenging to fake, even if the controls had been imperfect.

(Note: Not listed here are brief mentions of séances given by Bailey that can be found in issues of the spiritualist periodicals Light and Harbinger of Light during this period.)

Baggally, W.W. (1912). Report on sittings with Charles Bailey, the Australian apport medium. Journal of the Society for Psychical Research 15.

Doyle, A. Conan (1921). The Wanderings of a Spiritualist. London: Hodder and Stoughton.

Irwin, H.J. (1987). Charles Bailey: A biographical study of the Australian apport medium.  Journal of the Society for Psychical Research 54.

MacCarthy, C.W. (1904). Rigid Tests of the Occult: Being a Record of Some Remarkable Experiences through the Mediumship of Mr C. Bailey with a Critical Examination into the Origin of the Phenomena. Melbourne: Stephens.

Official Report of the Remarkable Psychic Phenomena Produced Under Rigorous, Test Conditions through the Mediumship of Mr Charles Bailey of Melbourne in the Course of Fourteen Sittings Held for the Purpose of Investigating These Phenomena. (1905). Melbourne: Bruce and Davies.