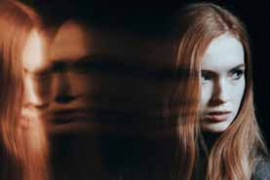 Doris Fischer is the pseudonym given to Brittia L Fritschle, the subject of a notable early twentieth century case of dissociative identity disorder (formerly multiple personality disorder) in America. The case was reported in detail by Walter Franklin Prince, an Episcopal minister who helped cure her.

Brittia L Fritschle was born 31 March 1889 to parents of German origin. Her father tended to alcoholism and was abusive to her mother and to her.  Aged three, she was thrown by him to the floor, and the resulting trauma appears to have triggered the emergence of ‘Margaret’, the first of four alters (alternate personalities) identified by Walter Franklin Prince. The primary personality recalled the incident only after intensive therapy nineteen years later.

From the age of seven, Doris (as she is referred to in the research literature) worked long hours to help support the household. She left school aged fourteen to take up full-time employment. According to Prince, through these years she was ‘robbed of sleep and kept on the ragged edge of exhaustion’.1

One evening in May 1906, Doris had a vision of her mother having been taken ill and rushed home early to find this was the case: her mother died some hours later. The shock caused a new personality named ‘Sick Doris’ to emerge. In September the following year, a fall and blow to the head introduced a third alter, referred to by Prince as ‘Sleeping Real Doris’.

In her late teens Doris was a frequent visitor to the Prince home, where Prince's wife provided meals and a safe place to sleep. Eventually Prince himself started to take an interest in her, intrigued by the frantic utterances and movements that disturbed her sleep. After watching this closely, he concluded that one more than one personality inhabited her body: in addition to the three alters described above, he identified a fourth, apparently that of a mature adult who claimed to be trying to help Doris.

Prince undertook to try to cure Doris, and in 1910 she was allowed by her father to move in with the Prince family permanently. Under their care a cure was effected within four years. However, the death of Prince in 1934 caused a breakdown from which she never recovered: she lived the rest of her life in a psychiatric hospital.2

The case is described in detail by Prince and psychical researcher James Hyslop in several lengthy papers in the Journal and Proceedings of the American Society for Psychical Research from 1915 to 1917, available online (see Literature).

After Doris began living with his family, Prince began to notice odd phenomena such as loud raps, shaken beds, mysterious footsteps, scratching sounds and apparitions. The phenomena continued even when Prince moved with Doris to a new location.

Prince recounted these phenomena in the Proceedings of the Boston Society for Psychical Research in 1926, under the title The Psychic in the House,3 in what parapsychological historian Arthur W Berger described as ‘the first sustained record of these phenomena to be kept carefully, methodically and over a long period of time’.4

‘Real Doris’ was Prince’s name for the primary personality, the original and natural mind of Doris Fischer. Prince considered Real Doris to be completely truthful.5 She said she experienced lapses in consciousness virtually every day, and until 1911, under Prince’s care, was never conscious of going to bed or sleeping at night. Awake, she habitually found herself in unfamiliar places with no idea how or why she got there. She learned about ‘Margaret’, the original and dominant alter, by reading notes that Margaret had written to her, by learning from family and friends of escapades she had been involved with as Margaret, and having conversations in which Margaret participated, controlling her voice. Prince first knew Doris as Margaret; he did not encounter Real Doris, the girl’s primary personality, until shortly before she moved permanently to live in his household.

Doris lived much of her daily waking life as ‘Margaret’, whom Prince describes as ‘mentally and emotionally a child of not more than ten years, with some extraordinarily naive notions not usually carried beyond the age of five or six’.6 Margaret was playful, capricious, free-spirited and mischievous. Her expressions, mannerisms, voice, preferences and verbal errors were entirely childish. She was aware of what Real Doris was thinking, but it was often incomprehensible to her childish mind. She could not comprehend religion; nor did she see the point of going school, which she therefore ceased aged fourteen.

‘Sick Doris’ appeared emotionless, with wooden expression, dull eyes and a monotonous, metallic voice. She was a slave to duty and to servile friendships. She appeared to possess no more knowledge than an infant and had to be taught how to care for herself, a task undertaken by Margaret, who in so doing conceived a bitter hatred against her, subjecting her to torments which affected the normal Real Doris as much as Sick Doris.

Sick Doris never learned to show affection or to engage in abstract thinking. However, she excelled at embroidery, which she could perform at phenomenal speed.

The alter named ‘Sleeping Margaret’ seemingly possessed the maturity of a forty-year-old and acted as guardian to Doris. She wrote: ‘I am a spirit, so-called by people who live on the earth ... sent by someone higher to guard Doris when she was three years old.’ She aided Prince in his attempts to bring about a cure, keeping him informed about Doris’s interior state and making suggestions that often brought good results. She referred to herself as ‘Sleeping Margaret’, probably because she spoke only when Doris was asleep, her eyes closed and because she emerged more or less simultaneously with Margaret: the two personalities sometimes alternated in quick succession, the expressions of each flitting across Doris’s face. Sleeping Margaret disclaimed ownership of any part of the body, but sometimes exerted limited control.

A fifth alter, ‘Sleeping Real Doris’, emerged after Doris’s fall at the age of eighteen, making infrequent appearances while Real Doris slept. Prince doubted this personality had self-consciousness. She could be identified by a puzzled facial expression and, on rare occasions when she spoke, a harsh croaking tone. Tests showed that she had memories that were exclusively her own.

Real Doris responded well to the calm and secure environment provided by the Prince household. Her periods of continuous consciousness began to extend to several hours a day. Gradually the alters weakened. Sick Doris’s memories began to fade, and she regressed to an infantile state. Margaret, who had on occasion been suppressed by Sleeping Margaret to enable Real Doris to remain conscious, also began to regress; she became blind and, aware of her impending demise she gave away her possessions. By now Real Doris had gained greater clarity of vision and was able to maintain complete control for two or three days at a time. Margaret finally disappeared in April 1914, leaving Doris integrated for the first time in 22 years.7

In 1911, Prince experimented with automatic writing. He placed a pencil in Doris’s hand above a piece of paper, while Margaret was in control, sleeping. Shortly the hand began writing: the author identified herself as Doris’s deceased mother, warning that Doris was vulnerable to harm by other people, but that she was safe with Prince (Margaret retained no knowledge of this incident on waking). Similar communications by Doris’s mother appeared in planchette experiments.8

Prince then brought in Hyslop, who undertook to determine whether and to what degree Doris’s personalities were related to mediumship, as the two phenomena appeared to have common characteristics.9 In 1914, Hyslop engaged the medium Minerva Soule (pseudonym ‘Mrs. Chenoweth’). Soule knew nothing of the case, which at that time had not been published, and was told nothing about it; she had not met Doris or any of Doris’s family, and was not permitted to see Doris during the sittings. A number of correct facts emerged that could not have been known by Soule, including names of several family relations and details about Doris’s childhood, for instance that she was physically healthy but required her mother’s help with emotional problems, that she was unable to play with other children because of her changing personalities, and instead had played games such as croquet with her mother, and that she would frequently run away from home.

Other personalities associated with Doris communicated through Soule, some identifying themselves as guides, others appearing to be confused or misguided discarnates exerting an influence on Doris for their own satisfaction.10

Hyslop, J.H. (1917a). The Doris Fischer case of multiple personality: Part III. Proceedings of the American Society for Psychical Research 11, 5-866.

Prince, W.F. (1915).  The Doris Case of Multiple Personality Part I. Proceedings of the American Society for Psychical Research 9, 23-866;

Prince, W.F. (1929). The Doris Case of Multiple Personality. In An Outline of Abnormal Psychology, ed. by G. Murphy, (1929). New York: A.S. Barnes & Co. [Adapted with minor changes from original text in the Proceedings of the American Society for Psychical Research 9.]